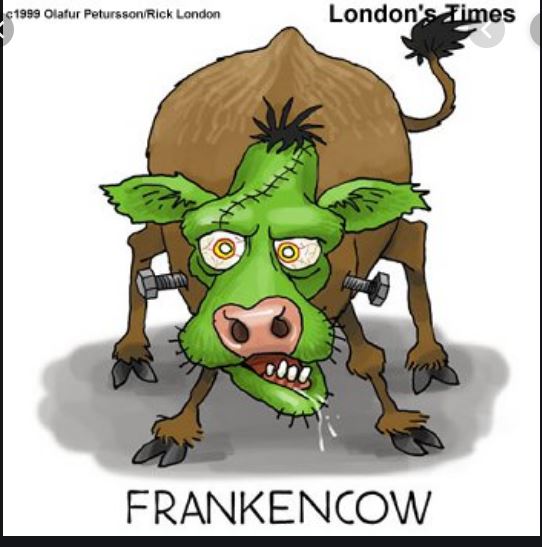 In my opinion, gene editing companies may have already unleashed mutations into the wild across animal and plant kingdoms. Characteristic of the immoral capitalist profit driven regime of the world, such companies are infested by humans with very little regard for circumspection. They are above the law, always seeking a work around the rules meant to constrain a**holes like themselves. Blindly arrogant to the requirements of due diligence, essentially off kilter and slightly insane.

The following are excerpted snippets of statements by scientists and others associated with the accidental inclusion of bacterial and antibacterial DNA in development of the hornless cow, detailed in an article Gene-edited cattle have a major screwup in their DNA , by Antonio Regalado MIT Technology Review - Aug 29, 2019

According to Mr. Regalado, A Holstein heifer will never grow horns thanks to gene-editing. Regulators have now found serious mistakes caused by the editing process.

To Recombinetics-the St. Paul, Minnesota gene-editing company that made the hornless cattle-the animals were messengers of a new era of better, faster, molecular farming. "This same outcome could be achieved by breeding in the farmyard," declared the company's then-CEO Tammy Lee Stanoch in 2017. "This is precision breeding."

They were the poster animals for the gene-editing revolution, appearing in story after story. By adding just a few letters of DNA to the genomes of dairy cattle, a US startup company had devised a way to make sure the animals never grew troublesome horns.

Food and Drug Administration scientists who had a closer look at the genome sequence of one of the edited animals, a bull named Buri, have discovered its genome contains a stretch of bacterial DNA including a gene conferring antibiotic resistance.

The "unintended" addition of DNA from a different species occurred during the gene-editing process itself, the government says. It went undetected by the company even as it touted the animals as 100% bovine and assailed the FDA for saying the animals needed to be regulated at all.

"It was not something expected, and we didn't look for it" says Tad Sontesgard, CEO of Acceligen, a subsidiary of Recombinetics that owns the animals. He says a more complete check "should have been done."

The blunder is a setback for Recombinetics, whose pioneering prototypes of gene-edited animals include heat-resistant cattle as well as pigs that never hit puberty.

All along, Recombinetics had noisily objected to oversight by the FDA, which categorizes gene-edited animals as new drugs that need extensive testing and approval. It even lobbied the Trump Administration to wrest oversight away from the health agency, saying it was holding back a barnyard revolution.

But gene editing isn't yet as predictable or reliable as promoters say. Instead, the procedure, meant to make pinpoint changes to DNA, can introduce significant unexpected changes without anyone noticing. "As genome-editing technology evolves, so does our understanding of the unintended alterations it produces," wrote the FDA scientists, led by Alexis Norris and Heather Lombardi, in a paper they released in July. They think gene-editing errors "are under reported" and a "blind spot" for scientists;

The risk of haphazard engineering isn't just to barnyard animals. Genome-editing treatments to cure rare diseases are being tested on people and it is possible that patients will end up with unplanned genetic mutations. Unintended consequences are a particular concern in connection with attempts to modify human children before birth with gene editing-as occurred for the first time in China last year.

Related Topic(s): Genetically Modified Organism, Add Tags
Add to My Group(s)
Go To Commenting
The views expressed herein are the sole responsibility of the author and do not necessarily reflect those of this website or its editors.