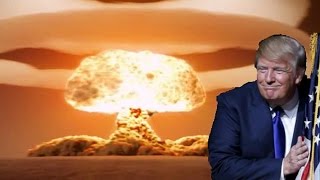 Donald Trump: Why Don't We Use Nukes?
(Image by YouTube, Channel: The Young Turks)   Details   DMCA

The recently published book Fire and Fury: Inside the Trump White House is an inside account of the Donald Trump campaign and presidency. One of its more stunning revelations confirms what informed people said about Donald Trump in 2016. He did not think he would win, indeed he had not intended to win. His campaign was a self-promotion extravaganza gone wrong. He went to bed early on election night because he thought the night would belong to Hillary Clinton.

If Trump was shocked he wasn't alone. The democratic party establishment were certain they would prevail. The corporate media and the wealthy donors who backed Hillary Clinton did so in the belief that her victory was inevitable.

But apparently none of them, Trump included, had a finger on the pulse of white Americans. They knew they wanted this man, the reality show buffoon and huckster. While rich republicans decided whether to support Jeb Bush, Marco Rubio, Ted Cruz, or Chris Christie, the white masses had made their choice, irrespective of elite machinations or the musings of pundits. They chose the man who said he would represent them and their interests and they never took a serious look at anyone else. Even the man who created his own persona of the white, every man president didn't see how much his campaign resonated with millions of people.

Trump famously said that he could shoot somebody on Fifth Avenue and not lose any support. He certainly proved himself correct. He got away with first person accounts of sexual harassment and assault, crude language, ableist jokes, the open backing of white supremacists, and racist remarks. "Make America Great Again" was a shrewd campaign theme, not overtly racist yet appealing to the white desire for a time when their rule was complete and unquestioned.

While Trump and everyone else may have been gob smacked his supporters were not. They kept their desire for supremacy to themselves. They didn't let on with pollsters as they went about the business of wishing for a white president. They knew what few others did. They didn't care about republican party orthodoxy very much. Tax cuts, deregulation, and interventionist wars were all side issues they went along with in order to support the white people's party. Whiteness itself was their priority.

From the time that their allegiance switched to the republicans their racism was used to cement voter support. In decades past the plea for "neighborhood schools" was used to mask opposition to desegregation plans. Terms such as "small government" were understood to mean that no money would be allowed to slip into the hands of black people. The panoply of republican orthodoxy was always meant to convey the goal of keeping white people on top and black people under foot.

But Trump didn't bother with code words. He said Mexican immigrants were rapists and murderers and that keeping them out would be a high priority. He threw a Latino reporter out of a press briefing and claimed that the judge who presided over his Trump University fraud case couldn't be impartial because he was of Mexican ancestry.

Hillary Clinton and the democrats thought that his awfulness would repel the public. So much so that they neglected get out the vote efforts in key states. They believed that exploiting what would ordinarily be problematic would guarantee an Electoral College win. Yet more than 60 million people witnessed the open racism and vulgarity and fell in love. That must not be forgotten even when Trump may seem to be on the ropes.

It is unwise to think of Trump as being vulnerable at this juncture. Supposed low approval ratings should be taken with high degrees of skepticism. The same people who silently loved him during the campaign haven't changed. Now he benefits from his legislative successes with the right wing of the ruling classes. The recent tax bill was long sought by republicans. He is delivering for his party and they are unlikely to pursue the impeachment which is presented as the answer to every anti-Trump prayer.

The democrats have failed to formulate a coherent message that would defeat Trump. They are stuck where they started out because they are bought off themselves. So they refuse to make even tepid reforms that would gain them voter support. They hope that people will reject the man who tweets messages against foreign governments, lets his son-in-law run foreign policy, and believes himself to be smarter than he is. It is easy to make fun of someone who calls himself a "stable genius" but that same man won before when expert opinion said that he would not.

The book Fire and Fury won't sink Donald Trump. Neither will revelations that would damage others. The very thing that makes him so repugnant to half of the country gives him an appeal with the other half. That is the fire and fury that everyone must acknowledge.

Related Topic(s): Donald Trump Supporters; Love Right Wingers; Racism; Republican; Trump Cruelty; Trump Ego, Add Tags
Add to My Group(s)
Go To Commenting
The views expressed herein are the sole responsibility of the author and do not necessarily reflect those of this website or its editors.