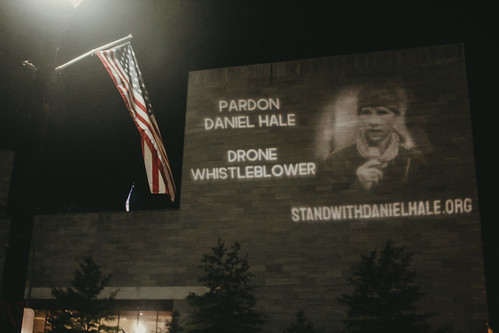 The sentence was much harsher than Hale's defense requested but not nearly as harsh as US prosecutors pushed for, arguing that longer prison sentences are necessary for deterring whistleblowing in the US intelligence cartel.

Despite the fact that Hale pled guilty on March 31 to one of the five Espionage Act offenses he faced, prosecutors remained spiteful and unwilling to support anything less than a "significant sentence" to "deter" government employees or contractors from "using positions in the intelligence community for self-aggrandizement."

In other words, if you tell the public the truth about your government's crimes, you will be made an example of so nobody else tries to do that. And then for that brave and selfless act, you'll be smeared as doing it for "self-aggrandizement".

The US government makes no secret of the fact that it uses draconian prison sentencing to keep people from reporting the truth about its murderous behavior. It's the same as the way kings would torture dissidents in the town square to show everyone what happens when you speak ill of your ruler, just dressed up in 21st-century language about "national security" (a claim that is itself nonsense because as Julian Assange said, the overwhelming majority of information is classified to protect political security, not national security).

The idea is that for every whistleblower you flog in the town square with harsh prison sentences, you deter a thousand other government insiders from ever picking up the whistle themselves. They're not punishing anyone for endangering "national security," or even necessarily for damaging or inconveniencing them in any real way; Reality Winner's leaks were of no particular significance, yet she got more than five years just to make an example of her.

Related Topic(s): America; Drone; Government; Sentenced; They Stray You Pay; Whistleblower, Add Tags
Add to My Group(s)
Go To Commenting
The views expressed herein are the sole responsibility of the author and do not necessarily reflect those of this website or its editors.