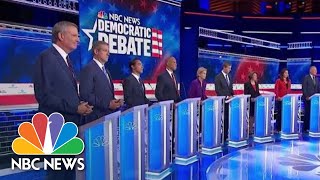 Lester Holt: Hello and welcome to the Democratic Party presidential debates, where tonight 10 people will pretend to be much further to the left than they actually are so that normal human beings will like them.

Savannah Guthrie: Our first question is for Senator Elizabeth Warren. Senator Warren, you have many plans for America. Many, many plans. Is this correct?

Elizabeth Warren: Yes that is correct. I have many plans to make things better, and Americans must come together and work together as Americans to make America America.

Savannah Guthrie: Thank you. Congressman O'Rourke, how do you feel about taxing the wealthy?

Cory Booker: Hey I can speak Spanish too!

Savannah Guthrie: Yes, yes you both can speak Spanish. This next question is for Senator Warren. Senator, you have many plans for America. Do you think rich people should be allowed to feast on the flesh of poor people?

Elizabeth Warren: No. We should stop allowing rich people to eat poor people because there are laws against this and my plan is to enforce those laws.

Julia'n Castro: I can actually speak Spanish better than anyone here, so I pretty much win this debate.

Cory Booker: Yeah well I live in a poor neighborhood.

Lester Holt: You shut your whore mouth, Delaney. Senator Warren, we haven't heard from you in a while. You've got lots of plans for America. Do you believe every American should have healthcare?

Elizabeth Warren: Yes, every American should be allowed to have healthcare.

Related Topic(s): Debate; Democratic Party Stupidity; Democratic Values, Add Tags
Add to My Group(s)
Go To Commenting
The views expressed herein are the sole responsibility of the author and do not necessarily reflect those of this website or its editors.