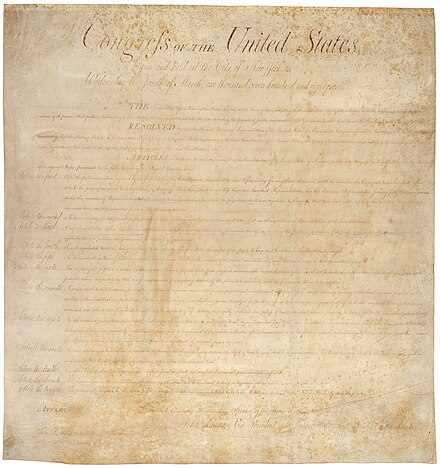 Congress shall make no law respecting an establishment of religion, or prohibiting the free exercise thereof ...

So begins the Bill of Rights. This First Amendment to our Constitution guarantees these two rights in what are often called its establishment clause and its free exercise clause; significantly, their placement at the start of the very first amendment suggests how important these rights must have seemed in the early days of our country. The words are simple and we mostly think we understand what these clauses mean, but as with other parts of the Constitution, the courts and even ordinary citizens can and do disagree; for example, what do the terms, establish and free exercise, actually mean. But we might also, and much more fundamentally, ask what religion should mean in the context of the Constitution.

Wikipedia observes that there is no scholarly consensus over what precisely constitutes a religion. How to interpret the word "religion" may not be clear but the importance of its interpretation within the Constitution is quite important. The legal meaning of a word is often broader than the common usage would suggest; a well-known example is the inclusion of corporations within the legal notion of "person".

Elsewhere, Wikipedia does offer the opinion that a religion is a set of beliefs that is passionately held by a group of people that is reflected in a world view and in expected beliefs and actions. I might add a simple additional qualification that a belief system that is universally believed or universally disbelieved is not a religion; for example, physics surely is not a religion even though the fundamentals of physics surely constitutes a (nearly) universally system of belief and that system is passionately believed. But attempts to add some additional constraints to narrow the definition of religion would seem to risk omitting what are some widely recognized religions and some do not revolve around gods or spirits.

But from another point of view, what surely motivated putting religious rights at the very start of our Bill of Rights very likely were memories of the oppression and the wars that had been fought in Europe in the name of one or another religion. Putting religious rights at the very start of the First Amendment must have in part come from a desire to insulate this country from this kind of damage and divisiveness. These religious rights were surely formulated at least in part as a plea for tolerance. The First Amendment was likely written in the hope that differing belief systems, especially when passionately held, would not become a cause for dispute, for war or for oppression.

Times have changed and it seems that wars of the current era are more commonly fought over economics than over religious doctrine. So perhaps our understanding of the First Amendment should be broadened and we should now consider capitalism as just one more example of a religion. Capitalism surely meets the Wikipedia definition as a belief system that is passionately held. Communism and socialism (and even classical competitive small-business capitalism) show capitalism not to be universally held.

Moreover, the world has experienced oppression and war as a battle between capitalism and communism. We return to the earlier question--does it now make sense that, at least for the purpose of interpreting the First Amendment, capitalism should be considered to be a religion? If so, has it in fact become an established religion of the United States in violation of the establishment clause? Has our government, in violation of the free exercise clause, prohibited the free exercise of economics?

If the answers are yes, then in all fairness we have to consider alternatives to capitalism such as socialism or communism to be also treated as religions. They surely should, though these alternatives are today very distant from being a religion established by our government.

If we are to consider capitalism and socialism to be religions, then the notion of fairness should take an historical perspective in much the same way that affirmative action tried to compensate for the historical wrongs inflicted by slavery. So long as these alternative economic systems have not gained a dominant position, efforts like encouraging unions or worker co-ops should not be interpreted as steps toward the establishment of a state religion, but rather as an effort to correct past wrongs done to unions and cooperatives because of the history of our government tilting the scales in favor of private corporations through lavish subsidies, favorable legislation and lucrative tax treatments. But likewise, to continue such supports even after a system of beliefs becomes dominant clearly suggests that that system has become a belief system (religion) established by the government.

If economic systems are to be interpreted as religions so as to fall under the first clauses of the First Amendment then should any other systems of belief be likewise included? The more general question is whether our our Constitution should be guided by the more general principle of fairness? Should we expect that it should avoid putting its heavy hand on the scale in any system of belief that falls well short of universal acceptance?

Related Topic(s): Beliefs; Capitalism; First Amendment; Religion US Govt Funded; Religion-Politics; Rights, Add Tags
Add to My Group(s)
Go To Commenting
The views expressed herein are the sole responsibility of the author and do not necessarily reflect those of this website or its editors.