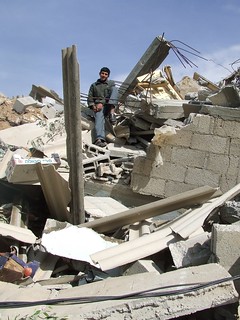 On a day when the senate voted no (again) on pay equity for women -- it was a procedural vote anyway -- and the nation's top military adviser warned that the US was on the brink of sending ground troops into Iraq, Palestinian children finally returned to their schools in Gaza. Or what's left of their schools, anyway. With what's left of their schoolmates. Twenty-six schools were destroyed and 250 were damaged in the latest bombing by Israel. At least 20 schools still serve as temporary housing for up to 64,000 families left homeless when the bombs turned their houses to rubble.

Many of these children return without their classmates. Or their parents. And psychological counselors will be on hand to comfort the children traumatized by the recent assault on what's left of their homeland. Three wars in six years, thousands of dead.

And yet the routine continues. Shopkeepers set out their wares on the city streets, cooks in restaurant kitchens stir their pots of soup, and children return to school. How will they focus on their textbooks when they never know when -- or where -- the next bomb will drop?

"'The top priority now is making sure that after a period of psychosocial support, including the use of theatre for
development techniques, our students can return to their regular curricula,' said Pierre Krahenbuhl, head of the United Nations Relief and Works Agency, which runs more than 200 Gaza schools.

"He also said that UNRWA has employed over 200 counsellors who will work with as much as 240,000 students in its schools.

"UNRWA said some 64,000 refugees are still being housed in 20 Gaza schools. Gaza's deputy education minister, Zeyad Thabet, also said a total of 26 schools in the territory have been destroyed while 232 schools have been damaged during the war.

"In Shejaia, a Gaza neighbourhood where hundreds of houses were damaged or destroyed, schools have lost some of their students, staff and their facilities have been affected by the war. The Palestinian Education Ministry along with international and national agencies will also take part in providing psychosocial support to another quarter million students in Gaza's public schools.

"Health officials commissioned by Hamas claimed that more than 2,100 people, mostly civilians and among them 500 children have been killed in the war."

It is unimaginable, the horror these children have faced -- and continue to face -- simply because they are Palestinian, their families still clinging to the remains of their homeland. Do these parents still have hope for their children? Do they dream of a better future where their sons and daughters will someday live in peace? Sleep in beds instead of on mattresses on the ground, have a home will walls instead of scraps of fabric ... maybe go to college and get married and build families and lives of their own, free from the horror of the bombs?

The Jewish holy day of Yom Kippur, the day of Atonement, will soon be celebrated around the world. One wonders, how will Netanyahu reconcile the atrocities of Gaza, this time?

Kathy never expected a career in radio as a talk show producer. Born and raised in Atlanta, Georgia, Kathy was completing her nursing degree when in 2001 - in an emergency - she was asked to fill in as the producer of Mike's program. Within a few (more...)
Related Topic(s): Benjamin Netanyahu; Children; Education; Hamas; Homelessness; Israel; Palestinian; Schools, Add Tags
Add to My Group(s)
Go To Commenting
The views expressed herein are the sole responsibility of the author and do not necessarily reflect those of this website or its editors.