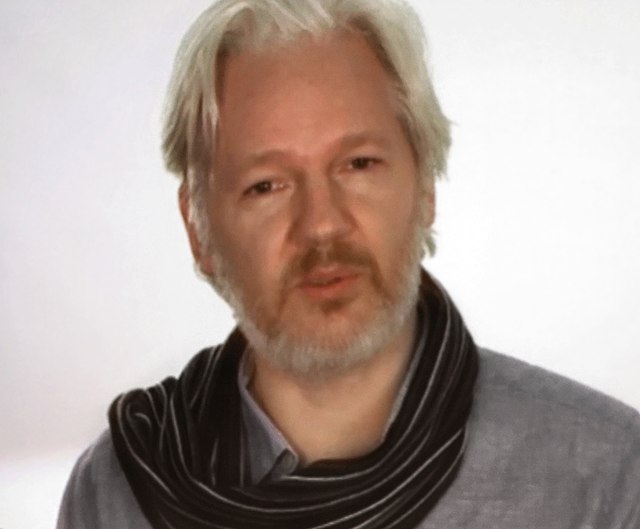 FORMER ECUADORIAN PRESIDENT Rafael Correa, in an exclusive interview with The Intercept on Wednesday morning, denounced his country's current government for blocking Julian Assange from receiving visitors in its embassy in London as a form of "torture" and a violation of Ecuador's duties to protect Assange's safety and well-being. Correa said this took place in the context of Ecuador no longer maintaining "normal sovereign relations with the American government -- just submission."

Correa also responded to a widely discussed Guardian article yesterday, which claimed that "Ecuador bankrolled a multimillion-dollar spy operation to protect and support Julian Assange in its central London embassy." The former president mocked the story as highly "sensationalistic," accusing The Guardian of seeking to depict routine and modest embassy security measures as something scandalous or unusual.

On March 27, Assange's internet access at the Ecuadorian Embassy in London was cut off by Ecuadorian officials, who also installed jamming devices to prevent Assange from accessing the internet using other means of connection. Assange's previously active Twitter account has had no activity since then, nor have any journalists been able to communicate with him. All visitors to the embassy have also been denied access to Assange, who was formally made a citizen of Ecuador earlier this year.

Assange has been confined to the embassy for almost six years, when Ecuador granted him asylum in August 2012. The grant of asylum was made on the grounds that Assange's extradition to Sweden for a sexual assault investigation would likely result in being sent to the U.S. for prosecution, where he could face the death penalty.

From the start, Ecuador told both the U.K. and Swedish governments that it would immediately send Assange to Stockholm in exchange for a pledge from Sweden not to use that as a pretext to extradite him to the U.S., something the Swedish government had the power to do but refused.

Correa also emphasized that Ecuador, from the start, told Swedish investigators that they were welcome to interrogate Assange in their embassy, but almost five years elapsed before Swedish prosecutors -- in 2016 -- finally did so. Citing those facts, a United Nations panel ruled in 2016 that the actions of the U.K. government constituted "arbitrary detention" and a violation of Assange's fundamental human rights, a decision British officials quickly said they intended to ignore.

Related Topic(s): Asylum; Ecuador Embassy; Extradition; Intercept; Julian Assange; Rafael Correa; Torture 13, Add Tags
Add to My Group(s)
Go To Commenting
The views expressed herein are the sole responsibility of the author and do not necessarily reflect those of this website or its editors.