Trump and his appointees kill children with reckless abandon. 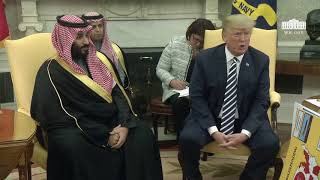 He kills them without remorse, without shame he should feel and does so with immoral prejudice.

"Even if he's a one-term president, Trump will have caused, directly or indirectly, the premature deaths of a large number of Americans, writes Paul Krugman of The New York Times.

Some of those deaths will come at the hands of right-wing, white nationalist extremists, who are a rapidly growing threat, partly because they feel empowered by a president who calls them "very fine people."

Some will come from failures of governance, like the inadequate response to Hurricane Maria, which surely contributed to the high death toll in Puerto Rico. (Reminder: Puerto Ricans are U.S. citizens.)

Some will come from the administration's continuing efforts to sabotage Obamacare, which have failed to kill health reform but have stalled the decline in the number of uninsured, meaning that many people still aren't getting the health care they need. Of course, if Trump gets his way and eliminates Obamacare altogether, things on this front will get much, much worse.

In America, all but seven states have laws that consider anyone who is involved in actions that result in needless death can be charged with murder.

Thousands have been slaughtered by the heinous white supremacists Trump emboldened by his unwillingness to condemn their actions and called them, as Krugman noted, "very fine people."

Elsewhere in the world, Trump's unflinching support for a murderous leader like Russia's Vladimir Putin put a U.S. Seal of Approval on the deaths of thousands of Russian dissidents.

The same can be said of Trump's support of North Korea's homicidal "Supreme Leader" Kim Jong-un, or his nasty habit of looking the other way at the dismemberment and murder of Jamal Khashoggi, an American citizen, by a Saudi Prince who helped the Trump family make millions on building projects.

Trump's sleazy cutback on federal regulations on the meat industry has increased deaths from food-borne illness and the hundred of deaths from just two recent crashes of Boeing 737 Max 8 jetliners are tracing back to cutbacks by FAA regulation of the airline industry. Trump put a former Boeing senior officer in charge of the FAA.

Related Topic(s): Donald Trump Criminal; Immigration; Krugman; Murder; Trump Dangerous, Add Tags
Add to My Group(s)
Go To Commenting
The views expressed herein are the sole responsibility of the author and do not necessarily reflect those of this website or its editors.