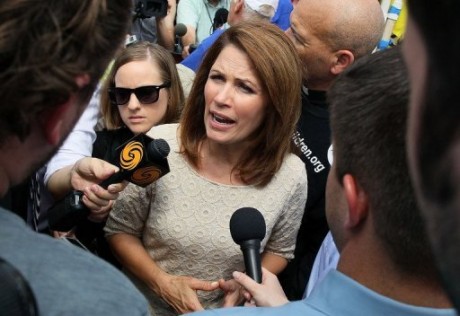 Shoot-from-the-lip Minnesota Congresswoman Michele Bachmann"s mouth has purged verbal diarrhea once again and this time her outrageous comments brought attacks from Republicans as well as Democrats.

Her latest slip of the lip came in letters that Bachmann and four other off-the-wall Republican House members sent to the inspectors general in five government agencies claiming a longtime aide to Secretary of State Hillary Clinton is affiliated with the Muslim Brotherhood, an Islamic terrorist organization.

The ludicrous claim brought swift reaction from both sides of the political aisle with Sen. John McCain condemning her actions, House Speaker John Boehner calling her words "dangerous" and even her former campaign manager Ed Rollins calling her words "foolish."

Joining Bachmann in her latest venture into the realms of fantasy are GOP fruitcakes Rent Franks of Arizona, Louis Gohmert of Texas, Thomas Rooney of of Florida and Lynn Westmoreland of Georgia.

When word of the letters reached the staff of Capitol Hill Blue, the general reaction was a general shaking of heads. Nobody was really surprised. Nothing is too loony for Bachmann, who steadfastly refused to back down.

The target of Bachmann's illusions is Huma Abedin, a long-time aide to Clinton and wife of disgraced Democratic Congressman Anthony Weiner, who quit after getting caught sharing photos of the outline of his weiner over the Internet. Abedin may be guilty of poor taste in men but that appears to be her only crime against humanity.

Abedin, the daughter of educators, is a native-born American. She is a practicing Muslim.

On Thursday, Bachmann went further over the edge when her office issued a news release headlined: "Obama's Friends Are America's Enemies."

Bachmann claimed Obama is preparing to meet with newly-elected Egyptian President Mohamed Morsi, a member of the Muslim Brotherhood. The White House says no one-on-one meetings are planned.

Such antics are typical of Bachmann, who invents facts and goes on on tangents that only Sarah Palin would envy. Her short-lived 2012 presidential campaign collapsed under the weight of reality.

Related Topic(s): Michele Bachmann; Republican; Weiner, Add Tags
Add to My Group(s)
Go To Commenting
The views expressed herein are the sole responsibility of the author and do not necessarily reflect those of this website or its editors.