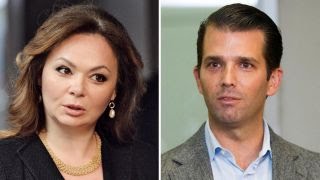 On Tuesday morning, there was a stunning development in the Trump-Russia scandal: Donald Trump Jr. confessed. In yet another bombshell story, the New York Times reported on emails showing that the president's oldest son had eagerly accepted an offer of help during the 2016 campaign from what he understood to be the Russian government. Trump Jr., the Times disclosed, had set up a meeting with a Russian attorney in the hopes of receiving derogatory information on Hillary Clinton straight from Putin's regime. As the Times was publishing this story, Trump Jr. tweeted out those same emails.

The emails reveal that top Trump campaign advisers Paul Manafort and Jared Kushner attended the meeting and suggests that all three Trump advisers colluded in what seemed to be a Russian government-backed attempt to hurt Clinton in order to help Trump win the presidency. This new development contradicts the long series of denials from Trump defenders who have claimed that there was no collusion, that there was no evidence Russian leader Vladimir Putin wanted Trump to win, and that the Trump-Russia affair is merely a hoax perpetuated by loser Democrats and fake news outlets.

The Trump Jr. emails also provide partial support for some information within the Steele dossier.

The Steele memos, which Mother Jones first reported on a week before Election Day, were compiled during the campaign by a former British intelligence officer named Christopher David Steele, who was hired by a Washington, DC, research firm retained to unearth information on Trump. The documents contained troubling allegations about Trump and his connections to Russia and relayed unverified salacious information about the candidate. The first memo, dated June 20 and based on the former intelligence officer's conversations with Russian sources, stated, "Russian regime has been cultivating, supporting and assisting TRUMP for at least 5 years. Aim, endorsed by PUTIN, has been to encourage splits and divisions in western alliance." It asserted that Russian intelligence had "compromised" Trump during his visits to Moscow and could "blackmail him."

David Corn is  Mother Jones ' Washington bureau chief. For more of his stories,  click here . He's also  on  Twitter  and  Facebook .  RSS  |  TWITTER  David is (more...)
Related Topic(s): Donald Trump Junior; Trump And Putin; Trump Russia Memos; Vladimir Putin, Add Tags
Add to My Group(s)
Go To Commenting
The views expressed herein are the sole responsibility of the author and do not necessarily reflect those of this website or its editors.