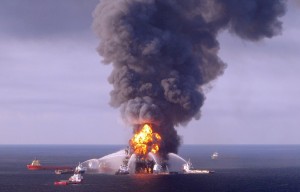 It's difficult to believe that it has been a year since the Deepwater Horizon explosion that killed 11 crew members and began the worst oil spill in history, with an estimated 5-million barrels (over 200-million gallons) of oil dumped into the Gulf of Mexico over a period of 91 days.

And that doesn't count the 1.84-million gallons of toxic chemical disbursements BP pumped into the ocean in an attempt to cover up the magnitude of its malfeasance.

Pro-corporate forces from Washington to Wall Street want you to believe that the chemical stew has magically disappeared without adverse impact, leaving healthy coastal communities, pristine beaches, unharmed ecosystems, undisturbed wildlife, and perfectly safe seafood. And if you believe that, I've got a plate of raw oysters from Gulfport I'll be happy to serve you. You won't believe how smoothly they slide down your throat. Try them with the Tabasco, it cuts the petrol flavor.

According to tests performed by the Louisiana Environmental Action Network, blood samples collected from individuals assisting in the Gulf clean-up efforts showed dangerously elevated levels of an assortment of toxins, including Isooctane, Methylpentane, Hexane and Benzene. Benzene is known to cause a host of health problems including anemia, irregular menstrual periods, ovarian shrinkage and leukemia. According to the report, "a 10-year-old boy from the Biloxi, Mississippi area was exposed to the BP chemicals along the Mississippi coast while playing outside. The parents of the 10-year-old are crabbers. As a result of his exposure, he had severe respiratory impacts." 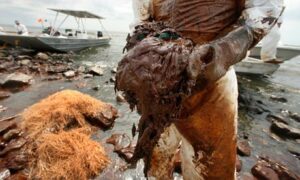 Other species are not faring well in the aftermath. Dead turtles are washing up in Mississippi. Recently, marine biologists have found unusually high numbers of dead dolphins washing up on the Gulf Coast, with scientists guessing that these animals were born during the oil spill and were permanently damaged by the effects of the poisons on their young developing bodies. At a meeting of the American Association for the Advancement of Science in February, Samantha Joye, a marine scientist at the University of Georgia in Athens, found evidence of dead invertebrates -- starfish and even coral -- on the bottom of the Gulf, along with oily, sticky bacteria.

That is the literal foundation of the marine ecosystem. This disaster is not over, it may just be beginning.

But the BP executives continue to rake in record profits and quickly dismiss critics who warn against ongoing safety violations and the fact that this particular disaster was 100% preventable. Adding insult to injury, The Guardian reports that BP is blocking all scientific efforts to study the impact of its disaster. Documents obtained under the Freedom of Information Act show BP officials discussing how to influence the work of scientists:

"BP officials tried to take control of a $500m fund pledged by the oil company for independent research into the consequences of the Gulf of Mexico oil disaster, it has emerged.

"Documents obtained under the Freedom of Information Act show BP officials openly discussing how to influence the work of scientists supported by the fund, which was created by the oil company in May last year:

"Russell Putt, a BP environmental expert, wrote in an email to colleagues on 24 June 2010: "Can we 'direct' GRI [Gulf of Mexico Research Initiative] funding to a specific study (as we now see the governor's offices trying to do)? What influence do we have over the vessels/equipment driving the studies vs the questions?"

Even now -- after killing and/or maiming 28 of its employees -- BP is up to its old dirty tricks. BP hopes to throw some cash at a small group of claimants and call it over. And the sad truth is, given the Corporatocracy that has replaced our former system of government, they'll probably succeed.

Kathy never expected a career in radio as a talk show producer. Born and raised in Atlanta, Georgia, Kathy was completing her nursing degree when in 2001 - in an emergency - she was asked to fill in as the producer of Mike's program. Within a few (more...)
Related Topic(s): Bp Oil Spill; Bp Oil Spill Coverup; Chemical; Health; Seafood; Toxins; Water Pollution; Water Samples, Add Tags
Add to My Group(s)
Go To Commenting
The views expressed herein are the sole responsibility of the author and do not necessarily reflect those of this website or its editors.