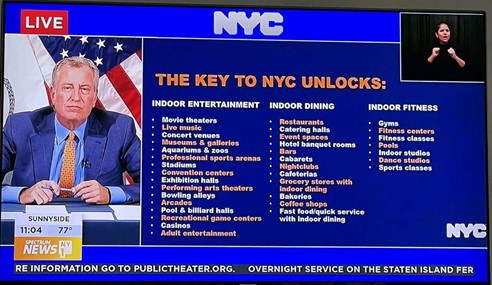 The Dictatorship of the Virus

We are in the midst of a radical restructuring of American society that involves imposing a regime of comprehensive discrimination, segregation, and social control not seen since the dismantling of Jim Crow.

To be clear, my central concern here is the policy of vaccine passports. Whatever one thinks many of the other issues involved here--lockdowns, masks, etc., forcing people to inject a novel pharmaceutical into their bodies is something of an entirely different order of intrusion.

The first thing is to recognize that this is what vaccine passports and mandates of the kind Bill De Blasio (in New York) and Joe Biden (nationally) are doing. It is not a matter of some temporary, minor inconvenience to a few people that can be waved off as no-big-deal. "If you want to participate in our society fully, you've got to get vaccinated" is an extraordinary, radically divisive directive.

It is telling millions of Americans, for whom our Dear Leader's "patience is wearing thin"--including me and >70% of black Americans--that they are going to be thrown out of work, school, and social life unless they agree to surrender their bodily integrity and right of informed consent, and submit to being injected with a pharmaceutical treatment of a kind that has never been used widely on humans before, that induces their bodies to produce a toxic protein, that has unknown medium- and long-term effects, that does not prevent them from getting or spreading the targeted disease, and that's going to have to be re-administered every 5 months.

This will change our lives and transform society. Not just the lives of the unvaccinated, who will be thrown out of normal society, be refused probation, and lose their kids, but all of our lives--starting with the friends, loved ones, and workmates of the unvaccinated, who will have to leave them behind. If you are unvaccinated, you will not be able to go to a restaurant, a movie, a museum, or a political meeting with your friends. You and your vaccinated friends will be subject to constant demands for proof of your extraordinary eligibility to exercise what should be normal and unquestionable social rights.

To put it more existentially, you will be deprived of the ability to live in society in the simplest, most primary way that should not involve the language of "exercising rights" at all. People will be dragged out of the diner and the political rally if they don't have the proper papers or QR code. We will all be living in a finely-articulated system of social control down to the cafe' level, a new kind of checkpoint society.

Well, maybe not that new. Most people accepting it will insist it's not the same as the kind of checkpoint society we've seen and castigated in other places and times, but a lot of people like this mayor of Boston and this holocaust survivor will see the resemblance. Jim Covid. Medical Apartheid.

This is a real, cop-enforced policy of discrimination and segregation. As with any such regime imposed by the power of the state, if you do not oppose it, you're accepting and helping to enforce it. There is no in-between. This is the "What would I have done" moment you'll look back on with either pride or shame. Please do not try to minimize it, or pass it off as no big deal.

Related Topic(s): Complete Informed Consent; Corona Virus Covid-19 Vaccine; Covid Restrictions Close Downs; Covid-19; Informed Consent; Vaccine Mandates; Vaccine Passports; Vaccines, Add Tags
Add to My Group(s)
Go To Commenting
The views expressed herein are the sole responsibility of the author and do not necessarily reflect those of this website or its editors.