By Alon Ben-Meir and *Arbana Xharra 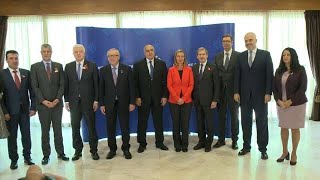 The six Western Balkan countries Serbia, Bosnia and Herzegovina, Kosovo, Macedonia, Montenegro, and Albania, are "state captured" by corrupt politicians, linked with organized crime. These facts have been documented by various international reports, which are raising major concerns among EU officials on the enlargement process.

These countries are expected to meet social, political, and human rights standards as fundamental qualifications for joining the EU. The EU, however, is becoming increasingly doubtful that the Balkan countries can meet these standards, as their social and political life is deeply beset by corruption. Nevertheless, the efforts to eradicate corruption must not stop because Balkan membership in the EU serves the geostrategic interests of both sides.

Cornelia Abel, Transparency International's Southeast Europe expert, said prior to the publication of its latest corruption index that the connection between politicians and businesses or organized crime "endangers, or in some cases even suspends to a large extent, the rule of law and the division of power." The European Union's foreign policy chief Federica Mogherini has pressed leaders to do more to fight corruption, but to no avail.

Lavdim Hamidi, the Editor-in-Chief of Kosovo's newspaper Zeri, who investigated corruption in the Balkans, says that "The Balkan states undoubtedly are at the top of the list of the most corrupt countries in the world."

The 2017 Corruption Perceptions Index highlights that the majority of the Balkan countries are making little or no progress in ending corruption. Journalists and activists in these countries are risking their lives every day in their effort to expose corrupt leaders. The index ranks 180 countries and territories by their perceived levels of political corruption, with one being the least and 180 the most corrupt.

Of all the Balkan counties, Macedonia is most corrupt, ranked 107th. Two months ago, Macedonian ex-Prime Minister Nikola Gruevski sought asylum in Hungary over a wire-tapping scandal for which the court found him guilty. Xhemal Ahmeti, an expert on Balkan political affairs, says that Macedonia and other Balkan countries are the same as in Nigeria or anywhere else -- corruption takes place behind the mask of tribal, family, clan, and ethnic ties.

"The 'elites' in these countries" says Ahmeti, "have always been at work to convince their publics that they are mistakenly accused of corruption by Westerners." Accordingly, the EU and international observers in Macedonia will not succeed in fighting corruption without direct and active monitoring on the ground.

Kosovo is the second most corrupt country in the Balkans, ranked 85th. Since it declared its independence in 2008, Kosovo has provided many opportunities for its political leaders to become extremely rich. "No matter where they served, all seemed to be profiting considerably more than their wages shows. High level party officials became so rich they could afford to hire personal drivers and bodyguards without declaring the source of financing," says Jeton Zulfaj, who spent the last two decades in Kosovo focusing on anti-corruption strategies.

In Kosovo, where unemployment reached an alarming figure of 30%, politicians are the richest class in the country. Many big businesses have greatly expanded thanks to politicians' support, who receive millions in return for "their efforts."

According to the corruption index, Albania fell from 83rd to 91st place. Progress was made in tackling petty corruption in the public sector, but much work must still be done, especially on corruption in the judiciary. Gjergj Erebaja, a journalist from Albania, says that "The justice system, including the prosecutors and the courts, are under extreme influence of the political elite. Politicians... use unlimited power of the state to blackmail voters... Large private businesses are, to some extent, an extension of the political system."

"The final cost of corruption is harder to total, but it includes millions in corrupt government spending, in stolen funds, and in missed foreign investments. And this price is always [falling on] the taxpayer, the citizen, who does not receive the quality public services for which they pay."

Transparency International official Cornelia Abel named Serbia as an example of a "captured political system," citing the excessive influence of its President, Aleksandar Vucic. "Serbia ... is becoming a prime example of one person in the position of power influencing everyone else," she said. Serbia fell by five places on the Corruption Perception Index, from 72 in 2016 to 77 in 2017.

Related Topic(s): Balkans; Corruption; European Union; Fraud, Add Tags
Add to My Group(s)
Go To Commenting
The views expressed herein are the sole responsibility of the author and do not necessarily reflect those of this website or its editors.