Copyrighted Image? DMCA
by Robynlou8
If you don't know the story of the Magdalene Laundries, or have not seen the harrowing 2002 theatrical film The Magdalene Sisters  -- well, it's another story of infuriating injustice, one of the hidden horrors of European Christian theocracy that you find hard to believe and don't really want to know about, so I hesitate to say that you should, but, yeah, you should. It's been largely disregarded because its victims were poor, helpless women. Here's the description of the institutions from RationalWiki:

A Magdalene laundry, also known as a Magdalene asylum [named for Mary Magdalene, the supposed prostitute], was a house for women who had "fallen" from "moral correctness""

These asylums were a network of laundries operated by the Roman Catholic Church in Ireland and elsewhere, and run by the Sisters of a range of orders. Many women lived and died in these institutions with little hope of escape. The only way they could be freed was by being claimed by a relative. Often, family members were told that the women had moved away, and would be impossible to find because they had assumed new identities.


And here's a description from Wikipedia :

Magdalene asylums were institutions from the 18th to the late-20th centuries ostensibly to house "fallen women", a term used to imply female sexual promiscuity". by the early twentieth century the homes had become increasingly punitive and prison-like. In most asylums, the inmates were required to undertake hard physical labour, including laundry and needle work. They endured a daily regimen that included long periods of prayer and enforced silence"

It is estimated that up to 30,000 women passed through such institutions in Ireland. The last Magdalene asylum, in Waterford in the Republic of Ireland, closed on 25 September 1996.

So, punitive workhouses for girls who were identified as over-sexual or over-defiant by their parents and/or parish priests, and then sent off to be "corrected" in an archipelago of asylums administered jointly by the Church and State. In Western Europe. Until 1996 . Who's preaching to whom about religious fundamentalism?
There is also an Irish TV movie from 2002, called Sinners, and there were a couple of 60 Minutes segments in 1999 you might want to look at. And here's the Magelene Laundries Survivor Advocacy Group.
Peter Mullan, the director of The Magdalene Sisters has said that one of the reasons he made the film was because the whole system of Magdalene Asylums had been hidden away in Ireland, kept as a kind of dark family secret, best forgotten and not talked about.  Which meant, of course, that the victims had not received any recognition, compensation, or apology, from the Church or State.  Former Magdalene Asylum inmates told Mullan that the reality of the Magdalene Asylums was much worse than depicted in the film.
I think so. See the pictures above. I think you have to have the details to get the full, bitter flavor of the thing. I will cite at length the account of Samantha Long , who, with her twin sister, in 1993, at the age of twenty-one, went looking for their birth mother:

Nothing prepared us for what we found.

Margaret Bullen had been committed to Ireland's Industrial School system at the age of two years because her mother was unwell and her father was unable to take care of their seven children. That was the end of Margaret and the outside world. By the age of five she was preparing breakfast for 70 children including herself. This work started at 4am after kneeling in the cold to say the rosary first. A fellow female child slave from this institution has told me that Margaret was a fretful bed-wetter, and to this day that woman can still imagine the smell of urine as the girls knelt to pray before dawn.

Margaret continued her childhood and puberty in these institutions, without the chance to grow up. At age 16, she was transferred to the Gloucester Street Magdalene Laundry just off O'Connell Street in our capital city. There she toiled, unpaid for the rest of her life. The working conditions were hard, with long hours of tortuous labour carried out in the strictest silence. Meals were meagre, and recreation time consisted of other types of unpaid work, such as embroidery or basket-making. When we were reunited, Margaret was 42, but looked like a woman 20 years older.

Margaret didn't tell us all the details of her life. She was too ashamed and seemed to think that we might look down on her or her work. That was understandable, because the rest of society was conditioned to feel superior to these "fallen women". Margaret was committed to the care of the Irish state, and the state sub-contracted that duty of care to the Catholic Church.

The state forgot all about the women once they went in. They should have checked on their physical, educational, nutritional, psychological, recreational well-being. But they didn't -- instead the state gave many laundry contracts to the religious sisters, and that slave labour was carried out by women like Margaret, who spent most of her life washing the bed linen and clothing from Mountjoy Prison in Dublin.

Despite being in the care of the church and state, Margaret became pregnant twice although she did not live in the free world. At age 19 she gave birth to my twin sister Etta and I, followed three years later by another daughter, whom we have never met. Upon being informed that her daughters had traced her and were ready to meet, Margaret had an emotional breakdown because she did not recall that she had given birth, presumably due to the post traumatic stress of having us taken away from her without consent or warning seven weeks after we were born. But all of the documentation was verified, not to mention our strong resemblance to her. 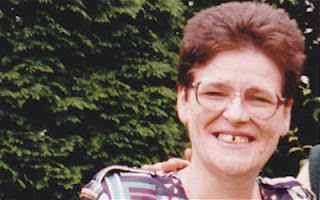 (Image by Unknown Owner)   Details   DMCA
by The Telegraph Margaret Bullen, pictured here in the 1990's (in her early 40s), spent her whole life in institutions
Margaret Bullen died in a Magdelene Aslylum at the age of 51. Having spent her whole life, since the age of two, in institutional isolation, unable to remember that she had given birth twice, it was all she could cope with.  The cause of death was "Goodpasture Syndrome, a disease caused by inhalation of chemicals over many years resulting in end stage kidney and liver failure."  The cause of death was the reactionary, repressive, misogynist, sexual ideology of the Irish Catholic Church and the willingness of its partner, the Irish State, to be the eager enforcer thereof.
Well, as a result of films like Mullan's and activities like Samantha's, and of the felicitous fact that the Irish people and government -- disgusted with the Catholic Church for many reasons -- have moved a long way on the path toward secularism, the wall of secrecy and shame about the Magdalene Laundries was definitively broken.  The government ordered an investigation, headed by Martin McAleese, into the State's role in the abusive system. The McAlesse report was published on February 5th, and this week the Irish Prime Minister (Taoiseach), Enda Kenny, gave an extraordinary speech in the Irish Parliament (Da'il Éireann) on the affair.
Kenny's speech is unusual enough in that it is a thoroughgoing, heartfelt apology, and a commitment to take full responsibility for all the women who were placed into the system, without trying to  limit its liability to the cases in which the state was directly involved  -- with an understanding that nothing but wholly inadequate compensation is imaginable at this point. But what makes it even more unusual, and worthy of hearing in full, is that the Head of Government does not shirk from denouncing the country's "fictitious" and flattering self-image as a factor that helped to make the horror possible. It's really an extraordinary speech in which the leader of a country abandons and denounces "generations" of self-indulgent nationalist/culturalist mythologizing.  Some excerpts:

It struck me that for generations Ireland had created a particular portrait of itself as a good living, God-fearing nation.

Through this and other reports we know this flattering self-portrait to be fictitious. It would be easy to explain away all that happened all we did in those great moral and social salves of 'the culture back then' -- the 'order of the day' -- 'the terrible times that were in it'.

Yes by any standards it was a cruel, pitiless Ireland distinctly lacking in a quality of mercy. That much is clear, both from the pages of the Report, and from the stories of the women I met.

I'm as proud as any Irish-American of my heritage, and as aware as any human being that every nationalist/culturalist/ethnic/religious (let alone exceptionalist) mythos is, beyond blarney, at least half a helping of self-indulgent, self-flattering bullshit. There's a time to drop the leprechauns and deal with the laundries. Hearing a head of government forgo the childish, narcissistic nationalism and talk to his people as adults in this way is a remarkably refreshing.  Would that more could.
Take a look at the story and video of the speech . It's about 20 minutes long, but, after reading the stories above, you'll understand why I urge you to hear it through to the end. (Here's the full transcript .):

Related Topic(s): Ireland, Add Tags
Add to My Group(s)
Go To Commenting
The views expressed herein are the sole responsibility of the author and do not necessarily reflect those of this website or its editors.