Click Here to Remove All Ads
Cross-posted from The Guardian
As Obama prepares to nominate the controversial former senator, the key question is whether Democrats will help neocons oppose him 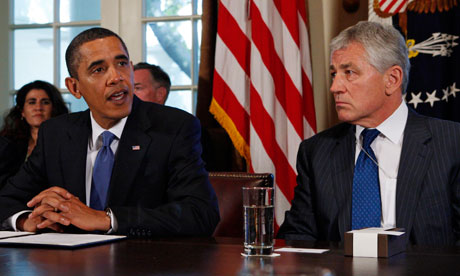 (Image by Unknown Owner)   Details   DMCA
Reports indicate President Obama next week will nominate Chuck Hagel to be the next secretary of defense. Photograph: Jim Young/REUTERS

Numerous reports from Friday indicate that President Obama, possibly as early as Monday, will name Chuck Hagel as his nominee to replace Leon Panetta as Defense Secretary. Many of the most right-wing GOP Senators have already categorically vowed that they will oppose the nomination of this decorated combat veteran and two-term GOP Senator from Nebraska, claiming he's hostile to Israel, "soft" on Iran and anti-military. Hagel's confirmation thus likely hinges on the willingness of Democrats to support it.

But before Hagel is nominated, numerous Democratic partisans and various liberals already expressed reservations or even outright opposition. Some of those, such as Sen. Chuck Schumer and Rep. Eliot Engel, are driven (as usual) by the same mentality driving neocons: they're worried that Hagel is a dissident when it comes to the bipartisan DC orthodoxy mandating lockstep, unquestioning support for the militarism and aggression of the Israeli government. There will be ample debate on these questions coming soon (I discussed those issues a couple of weeks ago on Chris Hayes' show).

But for other progressives, concerns over Hagel have nothing to do with Israel. They have instead expressed two unrelated objections: (1) back in 1998 -- 15 years ago -- Hagel voted against James Hormel as Ambassador to Luxembourg on the ground that Hormel, as Hagel put it, was "openly, aggressively gay" (for that concern, see Barney Frank, who completely reversed himself on Hagel from two weeks ago, and Rachel Maddow); and (2) Hagel is a Republican, and Obama should nominate a Democrat in order to show that Democrats are capable of running the Pentagon and military policy (see Markos Moultisas and Daily Kos).

For the moment, let us concede that there is validity to both concerns. In context, how significant are they?

When it comes to LGBT equality, 1998 is a different universe. Virtually no prominent Democrats (let alone Republicans) supported marriage equality back then, or even equal rights for LGBT citizens. In fact, Hagel's comment came only two years after the overwhelming majority of Democratic Senators voted in favor of the truly odious and discriminatory Defense of Marriage Act -- including Joe Biden, Patty Murray, Pat Leahy and Paul Wellstone -- which was then signed into law by Bill Clinton. That law not only defined marriage as between a man and a woman, but barred the federal government from issuing any spousal benefits -- immigration, tax, death benefits -- to same-sex couples. If you're going to judge politicians by how they felt about LGBT issues 15 years ago, be prepared to scorn almost every national Democratic Party hero you have as a bigot.

Related Topic(s): Chuck Hagel; Democratic; Israel; Issues; LGBT; Pentagon; Republican, Add Tags
Add to My Group(s)
Go To Commenting
The views expressed herein are the sole responsibility of the author and do not necessarily reflect those of this website or its editors.