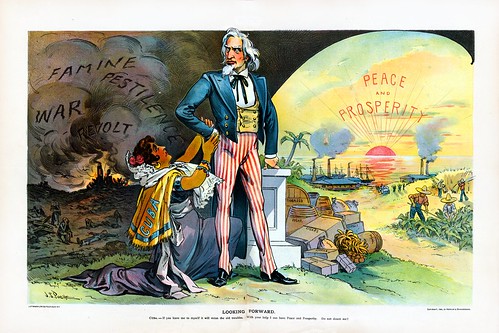 In the UK an average of just 600 people die from influenza every year, a testament to the major socialist concept the incredibly rich island has tolerated - the National Health Service.

In the US, where the biggest socialist concept they have tolerated is Social Security - to prevent mass elder-class starvation - the lack of health care annually kills 11 times more people than in the UK (proportionally). "It's fine," they say in the US - the price of freedom. Freedom of expression above all.

However, all of a sudden everyone across the West cares about preventing mostly-preventable flu deaths. Really?

In fact, apparently the West cares more than anybody: South Korea quarantined some neighborhoods, China one major city, Iran encouraged a national quarantine, but the West wants two entire continents to stay at home.

What overreaction? The West just has a huge heart - haven't their capitalist and Christian evangelists been saying that for four centuries?

In fact, how dare you possible micro-trigger a Westerner by suggesting an overblown macro-triggering? The vastly, vastly, VASTLY greater reaction of the West than of China, South Korea and Iran is entirely merited, and this cannot be questioned. Or so they keep shouting.

The problem in the West is that those in power during the corona crisis should not be in power.

Firstly, whereas in China it is as hard to get into the vanguard Communist Party as the Ivy League, in the West all one needs is rich friends or friends with clout. So of course the quality of the West's public service response to corona could have been predicted to be comparatively inferior.

The fourth estate and unofficial branch of government, the media, is similarly compromised: I can't read Chinese to verify if they are calming a panic instead of inflaming it, but I can read the dire warnings broadcast 24/7 by the Western MSM, whose ratings are surely through the roof. Very over-dramatic, indeed. Personally, I have encouraged anyone who will listen to heed my professional media opinion regarding this corona crisis: the less time you spend watching the Western MSM the saner and more stable you will be during this crisis. Your family will thank you.

In the West technocrats are in power: thus, in an epidemic we must all listen to doctors and statistical-modelling specialists. Both are quite well-paid jobs. Western technocratism means that the West absolutely cannot have policy even partially dictated by the needs or experiences of their legion of middle-aged, single-mother waitresses; or any of the 40% of Americans who don't have $500 to cover an emergency; or any part of the Yellow Vest-supporting Europeans who have had their social safety net slashed by unending banker bailouts and austerity measures.

The interpretation of statistics, and the public policy such statistics should influence - these things surely cannot be influenced by ideology, can they? I agree though - better to listen to nerds than to not get a second medical opinion.

Let's not act like they are Cuban: US doctors are perfectly at ease with you being homeless over unpaid medical bills, and they don't want you forcing them to go work on the front lines to cover this flu crisis. Cynical? Well, I am a daily-hack journalist, but is it such a taboo thought to think when you see yet another doctor handing down a life-and-death proclamation with smug certainty, yet again? Doctors are never wrong" yet the third-largest cause of death in the US is malpractice.

Given this undoubted difference in terms of public policy servants and public policy explainers, why on earth should we assume that the West's public servants are going to outshine Eastern ones? However, what can and cannot be achieved in these countries is also very different.

On a social level China, South Korea and Iran are Asian societies which are fundamentally more patriarchal and social, whereas Western societies are more matriarchal and individualist. This means that in the West many overworked single mothers are being inflamed into OCD-level sanitizings, while non-deadbeat divorced Dads are proving their all-conquering filial love by fist-fighting over toilet paper for Junior.

As stay at home orders - which vary from suggestions to promises of fines - proliferate across the West I will go out on a limb and say that many Westerners will go far further and treat the orders as if they were martial law. Yes, Westerners insist that they are more freedom-loving and unable to tie down than any Muslim nomad, but I recall a quite compliant response during the 2013 Boston Marathon bombing and subsequent lockdown. American libertarianism is only for good times, it seems.