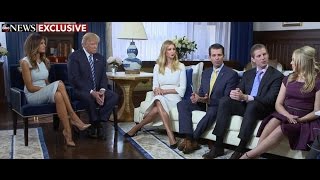 The Trump Family. An intervention might be in order.
(Image by YouTube, Channel: ABC News)   Details   DMCA

Democrats are talking about impeachment. Robert Mueller is looking at indictments. I'm fine with both, but honestly, more than anything else, I think America needs an intervention. Our addict-in-chief is out of control.

In addition to writing a blog for the past 10 years, I have been writing a monthly column called Addiction and Recovery. The goal always is to provide information on issues that are widely misunderstood. Like non-drinkers behaving like full-blown alcoholics.

The Dotard-in-chief has talked sparingly about his respect for the power of alcohol, noting that his brother, Fred, died of alcoholism and at least implying that this may be the impetus for the Donald's tea-totaling ways. But professionals in the field of addiction and alcoholics in recovery will tell you that alcohol is but one symptom of the disease. Take away the alcohol but change nothing else and you have what's known as a "dry drunk." That's someone who has all the "isms" and can be so miserable to be around that people often wish he or she were drinking again.

They'll also tell you it's a family disease. It can cross generations, skipping here, striking there, and can manifest in many ways. To repeat, alcohol need not be present for alcoholism to exist. It generally just makes it easier to spot.

What got me thinking about Drumpf and alcoholism was the obvious state of withdrawal he went into following the defeat of so many Republicans in the mid-term elections, culminating in the Democrats reclaiming the House of Representatives. It was bad enough to drive a man to drink. He was obviously depressed and reportedly irritable and angry at everyone in the White House. He even blamed Republican losers for not soliciting his support. He claimed Democrats voted more than once by changing clothes outside polling places. He fired his attorney general. He sat in his hotel room in Paris, watching TV and refusing to attend ceremonies at a cemetery to honor Americans who died fighting in World War I. Because it was raining. He was pouty with all the assembled world leaders, save for his buddy, Vladimir Putin, who managed to bring out a smile in him.

Well, for one thing, the Russian president may be the only head of state who hasn't let it be known, directly or otherwise, how little regard he has for Trump, as a person or a president. I think it's fair to assume that Putin buffs Trump's huge, fragile ego every time they meet. Especially in private. That's because Putin is smart and Trump is a sucker for applause, adulation, approval.

The other factor in his more-erratic-than-usual behavior of the past week or so was the absence of political-campaign rallies in his life. Leading up to the elections, they were an almost daily ritual. Get on a plane; fly here or there; make up scary stories of caravans of immigrants threatening America; rile up the base; hear them cheer. Look at all those MAGA hats! This is great! Bartender, hit me again.

Whaddya mean it's closing time? I'm the president and you're not. I want another campaign stop. They love me. Let's do Arizona again. Tell them I'll give them a tax cut.

It's tough to go back to work after that, especially when you hate your job and know you don't know how to do it but have to act as if you do. Alcoholics tend to have large egos and low-self esteem. This is often disguised by an outsized personality or an ability to persuade people.

Dr. James West, founding medical director of the Betty Ford Clinic, who was described by the clinic's director as "an addiction physician before there was even that term," also wrote a column on addiction that appeared in the Desert Sun, a daily paper in Palm Springs, California, in the 1990s. One column addressed the question of an "alcoholic personality" in someone who doesn't drink.