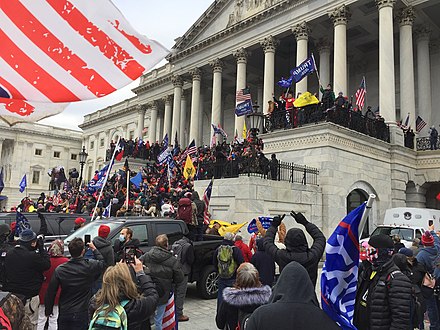 I took a walk around the pond Wednesday afternoon, January 6, a little before 4:30. It was cold, but still light out. The sun had just begun to set. As I walked I thought about how lucky privileged I was to be able to enjoy such a quiet moment in such a beautiful place in such a shithole country.

No, friends and family, I haven't moved. I still live in America, in a particularly scenic part of it, I think. For new readers, that place is upstate New York. It's a place where a man can be alone to enjoy nature, if the man turns off his electronic devices.

Two hours of watching live news reports out of Washington, D.C., had made me feel something I had never felt before a combination of fear, anger, sadness, shame and profound outrage. The calming words and presence of President-elect Joe Biden had finally broken the spell the scenes of chaos had cast on me. It will end, I told myself. It will not succeed. There aren't enough of them. They are all fury and delusion, taking selfies as they lay waste to the seat of government of the country they profess to love. Ignorance and arrogance, the Trump formula. In the end, it fails, but oh the harm it does. He doesn't care. They, the rioters, are too dumb to know. That's the nicest way I can put it. Or they are racists. Or both.

Those are the facts. And for several hours on a Wednesday afternoon, as our Congress was attempting to perform its constitutional duty of confirming a new president, these "Make America Great Again" terrorists made it look like one of those "shithole countries" their leader once referred to with intent to insult. Yep, that's what it looked like to me....

... As I resume writing, it is now a week later. Trump has been impeached, again. Incitement to insurrection. Five people died in the attempted coup on the Capitol, including a police officer who was beaten to death by the rioters. White terrorists carrying a Blue Lives Matter flag killed a Capitol police officer. They spread feces and urine throughout the building. They ransacked offices and went looking for House Speaker Nancy Pelosi and Vice President Mike Pence. The whole time, the rioters took selfies of themselves. Eventually, they went home or some D.C. bar, apparently thinking that would be the end of it. Just a friendly little failed insurrection in the nation's capital, broadcast live around the world.

If you stop to think about it - and apparently the rioters did not - the ignorance is astounding. It is surpassed only by the hypocrisy of the Republican members of Congress who encouraged and invited the assault and who voted against seating Biden as the duly elected president, even after the insurrection had been quelled. They stuck to the lies of the election being stolen from Trump, even though every one of them - except for perhaps a couple of conspiracy lunatics - knows that that is a lie. It was Trump's biggest and most dangerous lie. In truth, a treasonous lie.

Since that now infamous Wednesday, much more has been revealed about the attack on the Capitol. It wasn't as innocent as it first appeared. There was a plan. There may have been inside help from some Republican members of Congress. Maybe even from the Capitol police, who were woefully unprepared for a massive event that was announced well in advance. There was a delay in getting National Guard troops to the scene, perhaps caused by someone in the Defense Department.

There will be investigations. May they go on for as long as necessary and bring to justice all those who we're involved in this assault on America. Every last one of them. Homegrown terrorists. White supremacists. Members of Congress. Conspiracy nuts. Nazis. Klansmen. Racists. Pick a name. The list includes police and ex-military members as well. The attackers were virtually all white, which is why they are still alive. Lock them all up. People who bring swastikas and Confederate flags to attack the seat of the government of the United States of America deserve no mercy.

Trump now stands accused by Congress and convicted by the majority of the American people and the rest of the world of inciting an attempted overthrow of a duly elected government. But his accomplices in the Republican Party are also guilty. They have ignored his assault on democratic principles for four years, out of fear or for their own gain or because they agreed with him. They deserve what they're reaping. The party deserves to die. May it be reborn in some semblance of a responsible political party, perhaps including those Republicans who had the courage to speak out publicly and fight against Trumpism.

America has been put on notice. There are those among us, appearing publicly as patriotic citizens, but operating out of hate and fear that their dream of a white, Christian nation with everyone else second-class citizens, is about to die. And in their foolhardy effort to avoid that fate, they may have actually hastened it. Republicans who remained silent, evangelicals who remained silent as Trump ravaged democracy, all stand indicted. Those who supported him financially along the way and now seek to distance themselves, all stand indicted. Rupert Murdoch and Fox News stand indicted.

In a country Trump would call a "shithole," those seeking to overthrow the government usually try to get the military on their side if they hope to succeed. When they don't, they don't. As I watched with Lester Holt on NBC News as the idiots stormed the Capitol, I kept thinking, well, sooner or later troops with weapons and bullets will arrive. Hopefully, with orders to shoot. I also was dumbfounded that people were posting images of themselves on the Internet as they perpetrated this terrorist attack against this nation and gave no thought to the fact that this would make it easy to track them down and arrest them. Ignorance and arrogance.

Yes, we have a lot of work to do, but the first thing is not to give into Republican pleas of coming together for the good of the country. They spent four years quietly watching Trump tearing the country apart. They must pay the price. I repeat, there are many more of us than them and what is necessary now is for all who know and love and respect what this nation is about to speak out forcefully in defense of it. Bring to justice those responsible. Convict Trump. Convict him again and again on whatever charges may be filed when he leaves office. Teach young people that actions have accountability. When we get around to it, teach young people about civics and government and history in school again. Clearly a lot of Americans slept through those classes. Evangelical Christians are on their own in this one.

Joe Biden faces a monumental task when he becomes president on January 20, but he will have full control of the Congress to back him up and, I believe, fervent support of a vast majority of Americans as well. That white mob that assaulted the Capitol was an embarrassment to this nation, but maybe a lesson as well. American exceptionalism was put to the lie.

No, this is not a "shithole" country, yet. I can still take a quiet walk around the pond every day. But those who would take the right to feel that safe and at home in this country away from anyone whose skin color or nationality or religion or politics they find fault with must know there can be no healing until the wounds are closed, Not until the guilty are prosecuted and those who aided and abetted admit their guilt. Not until journalists are not casually referred to as "enemies of the people." Not until children are not put in cages. Not until all lives truly matter.

Related Topic(s): Capitol; Congress; Conspiracy; Coup; Democracy; Healing; Ignorance; Impeached; Insurrection In Dc; Joe Biden; (more...) Military; Nancy Pelosi; Police; President; Shithole; Trump, Add Tags  (less...)
Add to My Group(s)
Go To Commenting
The views expressed herein are the sole responsibility of the author and do not necessarily reflect those of this website or its editors.