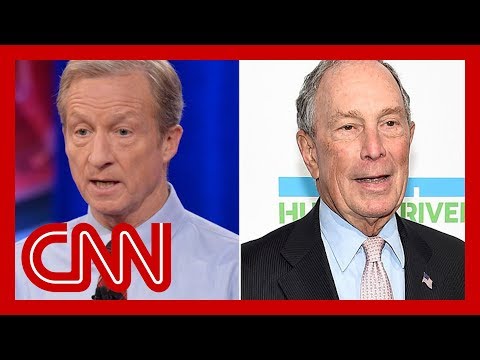 I've met and talked with the extremely wealthy, including Tom Steyer. They are routinely extremely friendly, often charismatic. That's part of what has made them billionaires.

But that is also another reason to make it illegal to be or become a billionaire. Billionaires are the most dangerous people on the planet, no matter how nice, charismatic or well intentioned they are. Their power is far too great.

Mike Bloomberg is in the process of demonstrating just how corrupting his power is. It has been reported that he's already spent over $350 million on advertising for his campaign. But that is just the tip of the iceberg. For decades, Bloomberg has bought influence and support by making "donations" to people or their organizations. He'll give $300,000 or as is the case with Georgia's Stacey Abrams, $5 million, in order to get something from the people running them-- either an endorsement or something of value to him.

The DNC put into place regulations that would only allow candidates to participate in debates if they met a collection of bottom-up standards-- raising money through a minimum number of donations nationwide and with x number of donors in at least 20 states and getting a percentage of poll respondent support.

Bloomberg gave a $350,000 donation to the DNC and the spineless, centrist leaders betrayed all the other candidates who went by those rules. It's despicable.

But Bloomberg's spending goes much further. He's offering a lot of money to a lot of people for supporting or promoting him, including paying for influencers on Instagram and consultants for other people's campaigns-- at much higher pay rates. We really can't tell how much money because I don't think any campaign finance regulations, as weak as they currently are, ever considered the possibility that a billionaire would be handing out millions of dollars to buy people and organizations.

I shouldn't leave out Tom Steyer. He doesn't have the bad history with racial profiling that Bloomberg has, and he has a better history, but he's also trying to buy his way into the election, spending a fortune in key primary states. It should not be allowed. Billionaires should be illegal.

Now, besides trying to make it illegal to be or become a billionaire we could also be calling for laws that make it harder or impossible for billionaires to wield their power and money. We could pass laws that no person, corporation or organization can contribute more than $10,000 to a campaign. That's an idea that's been advocated for many years as standard election finance reform.

And in passing, I mentioned power, as well as money. When a billionaire offers to put a business or plant or warehouse somewhere, like Jeff Bezos did, he is using power that is not directly tied to money that he puts out. But it does ask for tax concessions and even free financing.

Seeing the tip of the iceberg of the incredible influence Bloomberg's wealth give him access to, including buying shill politicians, like those on the Black Caucus who have endorsed him, should make it clear just how dangerous billionaires are, how they are an incredible threat to democracy and the future of the planet and humanity.

We should start by hamstringing their ability to spend money influencing campaigns-- their own or the many politicians they've "bought." Then we should tax the sh*t out of inheritances so no person becomes a billionaire by inheritance. Then, prophyllactically we should prevent people from becoming billionaires in the first place. If someone comes up with a great idea or a great company, he or she deserves some reward, not the power of becoming a billionaire. If taking a company public will produce billions, give them to the other people who played a role in making the success happen. And that can include the city and state the success happened in, and certainly every employee. This can happen within a capitalist economy. Consider it a capitalism that is bottom-up and fully inclusive and not built upon a top-down, authoritarian, elitist model and way of thinking.

I've started a Facebook group to support the conversation about getting rid of billionaires. Join it. https://www.facebook.com/groups/1219251188279757/

Related Topic(s): Billionaires; Dangerous; No Billionaires Debillionairize, Add Tags
Add to My Group(s)
Go To Commenting
The views expressed herein are the sole responsibility of the author and do not necessarily reflect those of this website or its editors.