Author and former Senate Judiciary Committee counsel Lillian McEwen, whose memoir this year describes a five-year romantic relationship in the 1980s with Supreme Court Justice Clarence Thomas, delivers a lecture Oct. 26 calling for his resignation on grounds of corruption that is dangerous to the public.

"The mask he has worn for so long has slipped during the past 20 years to reveal dishonesty, greed, and abuse of the public trust," she told me in an exclusive interview before her talk at the National Press Club at 7 p.m. (ET). "Fueled by self-hatred and resentment, Justice Thomas has allowed himself to be purchased."

Her comments come during widespread concern among court scholars over its ethics, partisanship and the adverse impact on the public. "The Supreme Court," says the cover of the widely respected Closed Chambers analysis by former court clerk Edward Lazarus, "affects the life of every American every day." Part of the concern has been visible in many retrospectives this month on the 20th anniversary of the Thomas confirmation hearings before the Judiciary Committee, in which he denied sexually harassing his former staffer Anita Hill.

But, as reflected below, the criticism recently has gone far beyond Thomas to reflect dismay about an unaccountable judiciary. Some on the bench accept money and gifts from those with interests before the courts and, recently in the case of Thomas, brag that they do not need to follow precedent if they want to change the law.

"This is going to be a big year for the Supreme Court," says Alliance for Justice President Nan Aron, whose group fought the Thomas nomination and, as described in a new column here, A Question of Integrity Hangs Over the U.S. Supreme Court, is launching a documentary next Tuesday portraying the court's failings. "This election cycle is going to remind everyone of the effects of its infamous Citizens United decision, as vast sums of corporate money flood the electoral system." 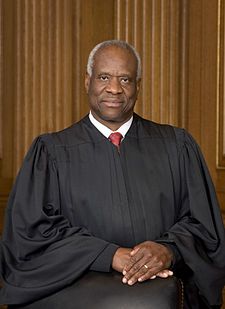 Thomas has ignored requests for comment aside from occasional and largely oblique denials of irregularities.

McEwen's lecture will be the first time she provides a view on the justice's overall fitness to serve based on her varied experiences with him and as part of Washington's legal community.

The retired judge at the U.S. Securities and Exchange Commission earlier this year published a blunt memoir, DC Unmasked and Undressed. In a powerful narrative style that largely avoids politics and policy, it recounts her search for happiness in law and romance after a harsh childhood with cruel parents in then-segregated Washington, DC.

She says she decided to break up with Thomas before his current marriage in 1987, his second, but before then had experiences with him that suggest to her that he perjured himself in his 1991 confirmation testimony about Hill.

The Senate committee chaired by Joe Biden failed to call witnesses who could have supported Hill publicly. The conservative group Citizens United had mounted a television ad campaign backing Thomas and targeting Biden and two other prominent Senate Democrats for what it called their past scandals.

The campaign,devised by Citizens United founder Floyd Brown following his 1988 successes with the notorious "Willie Horton" presidential ads, ridiculed Biden and his colleagues Ted Kennedy and Alan Cranston, with a headline, "Who Will Judge the Judge?" McEwen was by then a former counsel to the committee while Biden was chairman. She says Biden and others on staff knew during the confirmation battle that she had dated Thomas during the years he supervised Hill at the Reagan Administration's Equal Opportunity Employment Commission and Department of Education.

Her Oct. 26 lecture with Q&A, however, pertains primarily to what she describes as an overall pattern of Thomas deceptions that includes his family life, best-selling 2007 autobiography, My Grandfather's Son, and his search for wealth and approval among wealthy backers.

Those kinds of suspicions exploded into scandal earlier this year over the justice's false statements on his annual federal judicial disclosure forms. As first documented by Common Cause in January, he failed to disclose what critics compute as at least $1.6 million in benefits to his household, much of it payments to his wife, Virginia.