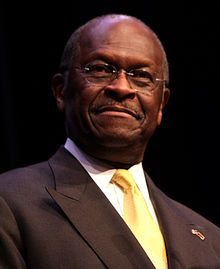 GOP Presidential candidate Herman Cain describes himself as a victim of a "high-tech lynching" -- not a playboy chasing women on his staff, as four have claimed, most recently on Nov. 7. Cain's "lynching" defense is modeled on the one his friend, Clarence Thomas, used so effectively in 1991 to deflect sexual harassment charges from Anita Hill and thereby win a lifetime appointment on the Supreme Court. Cain's ad has helped him raise $1.2 million in the past week, he told CNN, and has buttressed his support among conservatives.

But Cain has a larger problem, aside from Sharon Bialek, the fourth accuser who surfaced:

Clarence Thomas perjured himself when he used the slogan to defend himself in his 1991 Senate testimony, according to readily available evidence that I've been writing about via the Justice Integrity Project. Thomas Must Resign, Says Former Judge, Lover is one column. Beyond the sex allegations, the parallels tarnish Cain with financial misconduct allegations involving Thomas -- who is the subject of a current effort to force his resignation, federal prosecution and impeachment for financial crimes involving some billionaire backers who are now supporting Cain.

Thus, Cain's efforts to save himself by playing the "lynching" race card have the unintended consequence of linking him, Thomas and their financial backers.

Forty-six House Democrats last month called for a House impeachment probe of Thomas. A week earlier, 20 of them had called for an FBI probe for false statement and bribery regarding more than $1.6 million in gifts and household salary that Thomas failed to report for years, as required by law.

Most of the money went to his wife, Virginia, a longtime conservative policy advocate who sought to parlay the Supreme Court's Citizen's United decision into a big-time salary for herself, according to Thomas documents compiled by Common Cause. Her goal was to help corporations take advantage of the Supreme Court's activist decision-making in Citizens United that last year removed restrictions on corporate and union donations in federal elections.

On Oct. 25, as I reported previously on OpEd News, a progressive group called Protect Our Elections posted an ad headlined, "Clarence and Virginia Thomas...Bought by Billionaires," and shown below.

The explanatory text for the ad begins:

"Virginia, Harlan, Clarence and David have been having a good laugh at our expense. How much longer will we let this go on? America's citizens have had it with people in power who violate the law. That includes Clarence Thomas who has used his position as a Supreme Court Justice to flout the law and enrich himself, his wife and their cronies through corrupt backroom deals with billionaires Harlan Crow, and Charles and David Koch."

Virginia Thomas obtained $500,000 in November 2009 from real estate mogul Crow, according to documents now public. The documents show that promptly after the Supreme Court announced its Citizens United decision in January 2010 she created Liberty Central, a 501 (c-4) organization that would pay her $495,000 in salary to lead a group that would help corporations perform effectively under the wide-open election system the court put in place nationally.

Protect Our Elections posted a 12-page, single-space summary of false statement, bribery and theft of "honest services" evidence against Clarence and Virginia Thomas, which it says it sent to the FBI in July as part of an ongoing dialogue with the FBI and members of Congress.

Kevin Zeese, counsel for Protect Our Elections.org and an affiliated group, Accountability in Justice, says prosecuting Clarence Thomas should be the top priority for anyone concerned about ethics in government because Thomas is "corrupter No. 1" among all of the nation's high-level government officials in terms of documented evidence of crime. For months, Zeese has also been one of the main organizers preparing for an Occupy Wall Street offshoot now located at Freedom Plaza near the White House.

Kathleen Arberg, the court spokeswoman, told a Huffington Post reporter that the Thomas omissions on his disclosure forms were "inadvertent," as  reported in Democrats Ramp Up Calls For Ethics Probe Of Clarence Thomas. Thomas declines comment, as does his friend and benefactor,  Crow, heir to the Trammell Crow real estate fortune and an active advocate for extreme right-wing causes and donations benefiting the Thomas family and the associate justice's legacy. But Politico reported Thomas to have told a February meeting of conservative supporters at Liberty University closed to the media that he and his wife will continue to fight for liberty despite attacks, as described here: Defiant Clarence Thomas fires back.

Arberg, Thomas, Crow and the Koch brothers have failed to respond to my requests to them for comment.