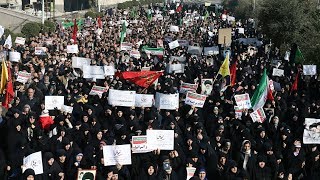 In a matter of days, Donald Trump will have the chance to scuttle the Iranian Nuclear agreement, a transaction that Trump has called "the worst deal ever." The future of the so called Joint Comprehensive Plan of Action or JCPOA depends largely on whether Trump opts to reimpose economic sanctions on Iran or not.

If the president does in fact reimpose sanctions, (sometime after January 13) the United States will be in "material noncompliance" with the terms of the nuclear agreement and all bets will be off. That means there are two questions that readers should be asking themselves:

1. Will Trump reimpose sanctions and kill the Obama-era nukes deal?

2. Are the protests in Iran instigated by Washington to provide cover to Trump for scrapping the JCPOA?

Take a look at this brief summary from an article at Politico:

"President Donald Trump allowed the Iran nuclear deal to survive through 2017, but the new year will offer him another chance to blow up the agreement -- and critics and supporters alike believe he may take it.

"By mid-January, the president will face new legal deadlines to choose whether to slap U.S. sanctions back on Tehran. Senior lawmakers and some of Trump's top national security officials are trying to preserve the agreement. But the deal's backers fear Trump has grown more willing to reject the counsel of his foreign policy team, as he did with his recent decision to recognize Jerusalem as Israel's capital.

"When Trump last publicly addressed the status of the Iran agreement, in mid-October, he indicated his patience had worn thin with what he has called 'the worst deal ever,' and demanded that Congress and European countries take action to address what he considers the deal's weakness.

"'[I]n the event we are not able to reach a solution working with Congress and our allies, then the agreement will be terminated,' Trump said in an Oct. 13 speech." ("How Trump could kill the Iran nuclear deal in January," Politico)

So there it is. We do not yet know whether Trump is planning to "blow up the deal" or not. Nor do we have a clear idea of how responsible US NGOs or US agents might be in fomenting the demonstrations on the ground. What we do know, however, is that scuttling the agreement -- which took years of deliberation, collaboration and compromise -- will be very costly for the United States. Former US Treasury Secretary Jacob Lew explained what the US can expect if it does walk away from JCPOA. Here's an excerpt from an editorial that appeared in the New York Times in 2014.

"...the United States does have tremendous economic influence. But it was not this influence alone that persuaded countries across Europe and Asia to join the current sanction policy, one that required them to make costly sacrifices, curtail their purchases of Iran's oil, and put Iran's foreign reserves in escrow. They joined us because we made the case that Iran's nuclear program was an uncontained threat to global stability and, most important, because we offered a concrete path to address it diplomatically -- which we did...Foreign governments will not continue to make costly sacrifices at our demand...

"Indeed, they would more likely blame us for walking away from a credible solution to one of the world's greatest security threats, and would continue to re-engage with Iran. Instead of toughening the sanctions, a decision by Congress to unilaterally reject the deal would end a decade of isolation of Iran and put the United States at odds with the rest of the world...

"The major importers of Iranian oil -- China, India, Japan, South Korea, Taiwan and Turkey ... will not agree to indefinite economic sacrifices in the name of an illusory better deal. We should think very seriously before threatening to cripple the largest banks and companies in these countries...

"We must remember recent history. In 1996, in the absence of any other international support for imposing sanctions on Iran, Congress tried to force the hands of foreign companies, creating secondary sanctions that threatened to penalize them for investing in Iran's energy sector. The idea was to force international oil companies to choose between doing business with Iran or the United States, with the expectation that all would choose us.

Related Topic(s): Human Rights; Iran; Protestors; Rights; Sanctions; Trump Foreign Policy, Add Tags
Add to My Group(s)
Go To Commenting
The views expressed herein are the sole responsibility of the author and do not necessarily reflect those of this website or its editors.