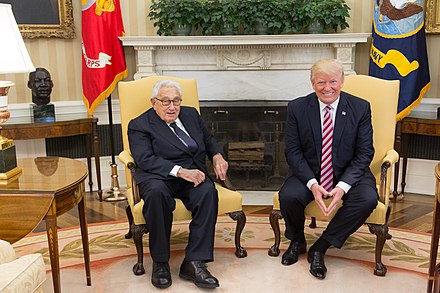 Henry Kissinger thinks the Coronavirus is a threat to his precious New World Order, so he wants President Trump to do whatever he can to protect the system. In an opinion piece that was published in the Wall Street Journal on Friday, the former Secretary of State urged Trump to launch a grand project, like the Marshall Plan, to unify the allies and convince them that Uncle Sam can still rally the troops in a time of crisis. Here's Kissinger:

"Drawing lessons from the development of the Marshall Plan and the Manhattan Project, the U.S. is obliged to undertake a major effort in three domains. First, shore up global resilience to infectious disease"Second, strive to heal the wounds to the world economy".Third, safeguard the principles of the liberal world order.

While the assault on human health will-hopefully-be temporary, the political and economic upheaval it has unleashed could last for generations. No country, not even the U.S., can in a purely national effort overcome the virus. Addressing the necessities of the moment must ultimately be coupled with a global collaborative vision and program. If we cannot do both in tandem, we will face the worst of each." ("The Coronavirus Pandemic Will Forever Alter the World Order", Wall Street Journal)

Kissinger thinks Trump's "America First" rhetoric has undermined foreign relations and weakened US hegemony. He thinks the administration's isolationist policies have created a leadership vacuum that China has quickly filled. And he has a point, too, after all, while China sent medical teams and vital supplies to countries hard-hit by the virus, the United States was busy tightening sanctions on Iran, Cuba and Venezuela, which prevented infected civilians from getting the medications they need to survive. Naturally, China's humanitarian contributions have been widely applauded while Washington's conduct has been denounced as petty, vicious and vindictive. There's no doubt that the Trump administration has ceded the moral high-ground to its arch-enemy, China. Here's Kissinger again:

"Now, in a divided country, efficient and farsighted government is necessary to overcome obstacles unprecedented in magnitude and global scope. Sustaining the public trust is crucial to social solidarity, to the relation of societies with each other, and to international peace and stability." WSJ

Of course, when Kissinger talks about "public trust" and "social solidarity" what he really means is that the government needs to settle on an effective public relations strategy that will dupe the sheeple into falling in line. In Kissinger's lexicon, solidarity is narrowly defined as 'public support for elitist projects' like globalization, open borders and the free movement of capital. These are the principles that guide Kissinger's recommendations not any affection for working people who he regards as stupid mules. Here's more:

"Nations cohere and flourish on the belief that their institutions can foresee calamity, arrest its impact and restore stability. When the Covid-19 pandemic is over, many countries' institutions will be perceived as having failed. Whether this judgment is objectively fair is irrelevant. The reality is the world will never be the same after the coronavirus. To argue now about the past only makes it harder to do what has to be done." WSJ

See? What really Kissinger really cares about is the post-coronavirus world order, which he believes will mark the beginning of an entirely new era, an era in which governments will have to respond to unexpected crises, bitter political polarization and the growing prospect of social unrest. Kissinger seems to grasp all of this, but instead of offering a new vision for the future, he clings to the battered remains of a failed system that has exacerbated the wealth gap, triggered one economy-crushing financial meltdown after the other, and widened the arc of instability from North Africa, through the Middle East and into Central Asia. This is the world order that Kissinger wants to preserve, an America-centric imperium ruled by establishment elites, brandy-drooling plutocrats and the Bank Mafia. Is it any wonder why the proles are demanding change? Here's more:

"The world's democracies need to defend and sustain their Enlightenment values. A global retreat from balancing power with legitimacy will cause the social contract to disintegrate both domestically and internationally." WSJ

"Enlightenment values"?? Is that what we saw in the photos from Abu Ghraib, or the footage from decimated Falluja, or the countless reports of black-sites where kidnapped victims were taken by US Intel Agents and beaten into submission? Do they practice enlightenment values at Gitmo, or at Bagram Air base or in Mosul which was reduced to rubble by heavy artillery and US bombers? Kissinger can blabber about enlightenment values all he wants, but he knows from first hand experience that those values are precariously propped atop a mountain of bloody corpses all sacrificed in the name of the liberal world order. Here's more:

"Enlightenment thinkers (argued) that the purpose of the legitimate state is to provide for the fundamental needs of the people: security, order, economic well-being, and justice. Individuals cannot secure these things on their own. The pandemic has prompted an anachronism, a revival of the walled city in an age when prosperity depends on global trade and movement of people." WSJ

There it is again, Kissinger's favorite theme, " global trade and movement of people", the two crumbling pillars of a globalization project that is now on life-support waiting to be euthanized by the millions of unemployed Americans who saw their jobs, their factories and their hopes for the future all go up in smoke due to outsourcing, off-shoring and Kissinger's glorious "liberal world order." Even now, while the US economy grinds to a standstill and jobless American workers wait anxiously by their doors for their $1,200 pittance from Uncle Sam, Kissinger continues to bray about the wonderful NWO that has greatly enhanced "security, order, economic well-being, and justice".

Related Topic(s): Corona Virus Coronavirus Covid-19; Henry Kissinger, Add Tags
Add to My Group(s)
Go To Commenting
The views expressed herein are the sole responsibility of the author and do not necessarily reflect those of this website or its editors.