I thought Tulsi Gabbard's statement (way below) was very interesting, courageous and yet another example of the terrific woman and human being she most assuredly is.

On the other hand, while the intention was undoubtedly noble, it displays an inability (or more likely unwillingness) to call a spade a spade as well as participate in Congress' critical role to exercise its duty and provide checks and balances to the executive branch of government. Shrinking from doing so is not going to "heal the divisions in this nation." In fact, letting a self-seeking tyrant run amok and shred the rule of law doesn't make one a nice person or a peacemaker. It simply enables evil. If you don't want to alienate those who would tear your country down and apart, due to their own greed, ignorance and racism, running for a position where you would have to take an oath to uphold the Constitution, just may not be the line of work you were ultimately cut out for.

I was seriously considering supporting Tulsi, and am still a big fan and admirer. But her voting "present" under these conditions demonstrates an either stunning naivete (particularly for a war veteran) or an insufficient degree of intellectual power and discernment to hold that high office of President, which will require an enormous amount of both, in order to truly succeed.

Also, I think it is unfortunately characteristic of politicians in general to say that they are doing things strictly out of conscience, and that they don't really care how it affects their popularity, when they know quite well that just saying that one is doing something out of personal conscience, will play particularly well in Peoria. Politicians always want it both ways: to appear to risk their careers for a perhaps unpopular principle, while at the same time shoring their careers up, by making as much capital out of their decision as possible. If you want to do something out of conscience, then just do it, and leave the rest to Providence...

"Tonight I voted alongside my colleagues in the House of Representatives on whether or not to impeach President Trump.

I want to explain why I decided to stand in the center and vote "present" instead of choosing a partisan position.

Throughout my life, whether through serving in the military or in Congress, I've always worked to do what is in the best interests of our country. Not what's best for me politically or what's best for my political party. I have always put our country first. One may not always agree with my decision, but everyone should know that I will always do what I believe to be right for the country that I love.

After doing my due diligence in reviewing the 658-page impeachment report, I came to the conclusion that I could not in good conscience vote either yes or no.


A house divided cannot stand. And today we are divided. Fragmentation and polarity are ripping our country apart. This breaks my heart, and breaks the hearts of all patriotic Americans, whether we are Democrats, Republicans, or Independents.

So today, I come before you to make a stand for the center, to appeal to all of you to bridge our differences and stand up for the American people.

My vote today is a vote for much needed reconciliation and hope that together we can heal our country. Let's work side-by-side, seeking common ground, to usher in a bright future for the American people and our nation. 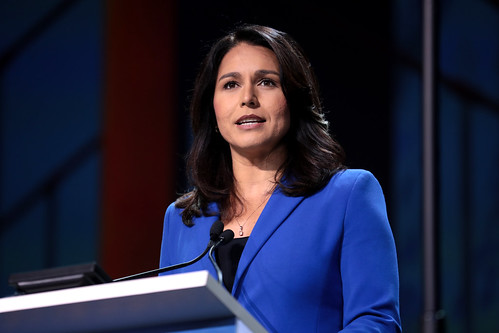