I just find it intriguing that Bill Gates would be building not one, but seven factories to produce what he believes will, one day, eventually be vaccines for the coronavirus pandemic.

"Bill Gates says he will plug money into building factories for seven promising coronavirus vaccine candidates, even though it will mean wasting billions of dollars.

On Thursday's episode of "The Daily Show," the Microsoft billionaire told the host Trevor Noah that his philanthropic organization, the Gates Foundation, could mobilize faster than governments to fight the coronavirus outbreak.

"Because our foundation has such deep expertise in infectious diseases, we've thought about the epidemic, we did fund some things to be more prepared, like a vaccine effort," Gates said. "Our early money can accelerate things."

Gates said the top seven vaccine candidates would be picked, and then building manufacturing capacity would be built for them. "Even though we'll end up picking at most two of them, we're going to fund factories for all seven, just so that we don't waste time in serially saying, 'OK, which vaccine works?' and then building the factory," he said."

There is no indication anywhere that these factories are anything other than a completely selfless, altruistic, philanthropic enterprise. And perhaps that's just what they are.

But because this is the assumption, no one ever asks, "Will you personally profit in any material way from the manufacturing of the vaccine, if any of the factories which you have helped fund produces them?"

I think it's a fair question, which someone should insist on hard documentation regarding. For me, it somewhat defies imagination that someone would spend billions of dollars on seven factories, at this point in time, for something which when created, will be required to be used by virtually every single person on the planet, and that individual having absolutely no expectation of making a red cent. Any fraction of the revenue generated from such an enterprise, would conceivably make him the richest man in the world, for the second time.

As a businessman, Gates has every right to try and make a buck, anywhere and however he likes (within reasonable limits of course). But not posing as a philanthropist in order to provide cover for his real objectives. He has already come under criticism in legitimate journalistic circles for some "questionable" philanthropic activities (most notably in the March issue of the "Nation" magazine (Bill Gates's Charity Paradox), so I think the question now becomes even more pressing, and reasonable.

It may all be as innocent and "humanistic" as they say.

But I do think it's a fair question to ask. 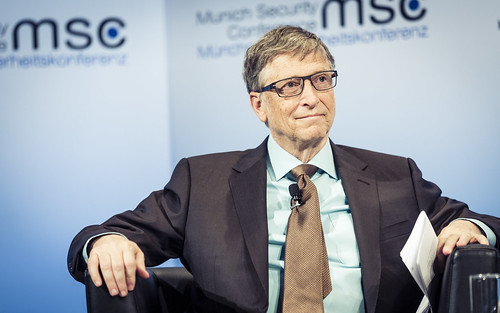 Related Topic(s): Bill And Melinda Gates; Bill Gates; Billionaires; Billionaires; Coronavirus; Government; Manufacturing; Manufacturing; Money; Money; (more...) Other; Other; Outbreak; Pandemic; Time; Time; Vaccines, Add Tags  (less...)
Add to My Group(s)
Go To Commenting
The views expressed herein are the sole responsibility of the author and do not necessarily reflect those of this website or its editors.