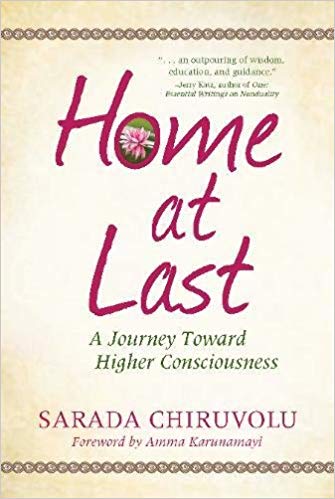 I have a friend who is actually what is called a "Self-Realized Person". She really is. Her name is Sarada Chiruvolu (here's her website). Sarada travels all over the country (and elsewhere) regularly giving talks on the topic, and has written an unusually good book called, "Home at Last: A Journey towards Higher Consciousness. Before her being "kicked upstairs" (so to speak), Sarada "...worked many years with various pharmaceutical companies and other medical industries, married, and raised a family while leading a normal life." She now lives in a beautiful home in Princeton, NJ with her husband, a retired Colgate Palmolive executive.

Sarada recently told me that just about the only thing she knows about Donald Trump is that people are pretty unhappy with him.

Now, if one is a bona fide self-realized person (and, for what it's worth, I am convinced she is, for various reasons), one must be living in what Sarada refers to in the title of her book as a state of "Higher Consciousness", or what some would even be called a "transcendental " state of consciousness. Any way one might want to express it, these rare beings are far more "aware" of their surroundings, environment, culture, etc than the rest of us could ever imagine to be.

So, when she told me this, I guess I naturally thought, "Okay, yeah, well... maybe you. But the rest of us are stuck with this lunatic."

But, then I began wondering about all the people I've come across in my life who describe themselves as "apolitical", a term which I've always found difficult to fathom. But, a good many of them are extremely successful and well-educated. And then, of course, what about the almost 50% of Americans who don't vote at all in Presidential or mid-term elections? I imagine a significant number of them simply also don't follow politics at all.

So, I began to daydream a bit: I tried to imagine going to work, coming home, spending some time with my friends and/or family; perhaps listening to music, reading a book or watching a film on Netflix. On weekends I'd go for a walk or ride in the country or to the beach, do a little antiquing, go to a concert, maybe work in the garden and/or get in a little shopping. In the evenings I'd sit on the front porch, watch the sun go down, watch the birds, listen to the crickets, and chat with neighbors passing by.

If this had pretty much been my weekly routine from since before Donald Trump was elected President, to if and when he leaves office (God willing) in 2021, my life would be no different at the end of his term than it was at the beginning.

He would have come and gone, along with the attendant 24/7 media frenzy, and it would not only have been a matter of complete and utter irrelevance and lack of consequence to me, but my life would have been altogether unchanged from the time he had entered office to the time he left.

I realize that the main charge which would be leveled here is probably that such an existence would be totally selfish and civically irresponsible. But... was the Constitution of the United States intended to be a context within which life could take place, or was it actually meant to be a way of life itself?

Alexander Solzhenitsyn once gave a very famous commencement address at Harvard University back in the 70s ("A World Spit Apart"), which essentially was a very harsh criticism of American life as he found it, after living here in exile from the (then) USSR for a number of years. At one point, his gaze now upon our modes and habits regarding the consumption of news here, he said, "People who work and lead meaningful lives don't need their Divine Souls stuffed with useless information."

Is the "pursuit of happiness" necessarily contingent upon being politically aware? Or are they, in fact, in basic conflict, if not mutually exclusive?