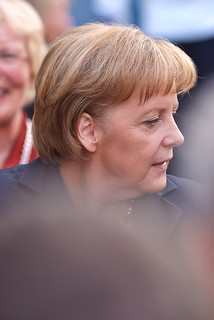 Seventy-five years ago, when Europe succumbed to Nazi Germany it was the sound of trundling panzer tanks rolling into capitals that heralded defeat.

Now it is German "panzer banks" that appear conquering all in front of them. The financial terms dictated to Athens over the latest so-called bailout is nothing less than the subjugation of a sovereign country to the dictate of German banks. The troubling question for several European states is: who's next?

Even the Western media could not disguise the shocking humiliation meted out to Greece by Germany's Chancellor Angela Merkel and her intransigent Finance Minister Wolfgang Schauble. The Washington Post described Greece's acquiescence to "punishing ultimatum," while Reuters said Athens had "surrendered."

The Western media haven't quite yet specified who the new financial dictators of Europe are. Reports refer blandly to "EU hardliners" and "tough EU leaders," but reading between the lines it is clear that the paymaster calling the tune now for the rest of Europe is Berlin. And the tune is not melodious.

The Greek "anti-austerity" government of Alexis Tsipras has been shamed into turning the country over to Berlin's finance capital. For an 86 billion "loan" extension, Greece is mandated to hand over 50 billion of Greek public assets that will in the future be privatized by "EU creditors," who in reality are the German government and its banks.

On top of that, Athens will have to implement more withering austerity on its long-suffering people; and if Athens doesn't meet the targets then Berlin will dispatch its shock-troops in pinstripe suits to ensure that it does. It's a financial scorched-earth blitzkrieg that effectively makes Greece a "German annex."

In 2010, Greece's total debt was 110 billion, or about 130 percent of its gross domestic product (GDP). In 2014, fueled by reckless EU creditor largess, the debt ballooned to 315 billion, or 170 percent of GDP. With the latest bailout, the country's debt will reach 400 billion -- over 200 percent of GDP. Most of the capital is from Germany, with the most powerful banks in Europe, and euphemistically referred to as "international creditor."

The pattern is obvious.

Greece is lured into ever-deeper, un-payable debt under the absurd guise of "reducing arrears." In this inevitable condition of debt-slavery, the country is bled dry and its assets can then be seized. Or as the Washington Post admitted: "A financial gun is held to the head of Greece."

When Nazi Germany rolled over Europe seven decades ago, its lesser-known instrument of conquest then was to take over central banks and force them into debt by imposing "loans." In 1942, the Nazi occupiers of Greece compelled the country to incur a debt which in today's terms would be $12 billion.

Today, Germany does not need to physically invade countries in order to subjugate them. It can do that through modern capitalist banking systems, in the same way that Greece is now being looted lock, stock and barrel. Expensive armies, Luftwaffe and panzer artillery are dispensed with; gruesome death tolls, media outcry and legal repercussions are avoided. But the end result is the same: conquest of other countries' resources for external aggrandizement. With typical German "efficiency" financial war has latterly replaced all-out military conquest in Europe.

But in the recent battle over Greece, it wasn't entirely a cake-walk for Berlin. Behind the scenes of frantic negotiations in Brussels, Merkel and Schauble were involved in serious clashes with French leader Francois Hollande and Italy's premier Matteo Renzi. The French and Italians were pleading with Berlin to "have a heart" and to afford Greece a measure of debt cancellation.

In the end, Berlin and its hard-line financial allies in the Netherlands, Finland, Latvia and Lithuania crushed the pleas for softer austerity terms. Greece is to be given no mercy. Merkel and Schauble want all debt to be collected, with no-holds barred.

France, Italy, Spain and Portugal have government debts that -- like Greece -- exceed their national economic outputs. By contrast, Germany and its northern European neighbors have typically national debts of 50 percent or less of their GDP. And, in all this, Berlin has emerged as the supreme paymaster, having availed of years of strong export-led growth and surpluses owing to the peculiarities of the euro monetary system.

Related Topic(s): Angela Merkel; Debt; Eurozone; Financial Genocide; Financial Meltdown; France; Germany; Greece; Russia, Add Tags
Add to My Group(s)
Go To Commenting
The views expressed herein are the sole responsibility of the author and do not necessarily reflect those of this website or its editors.