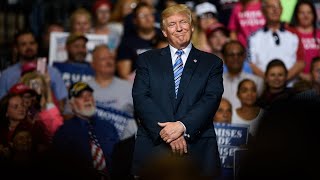 In an extraordinary US Senate hearing this week, lawmakers and military officials rounded on President Trump as being a danger to world peace due to his Commander-in-Chief powers for launching nuclear weapons.

The highlight came when the hearing was told military officers have the constitutional right to disobey the president.

This was, in effect, an open call to mutiny against the president's authority. The Senate hearing surely counts as an outstanding moment in a year of topsy-turvy politics since Donald Trump was elected 45th President of the United States on November 8 last year. Yet that moment of potential sedition seemed to pass off as a rather humdrum event.

The Senate Foreign Relations Committee held its hearings Tuesday on the legalities surrounding the presumed executive power of the president to launch nuclear missiles. It was the first time in over 40 years since such a debate was convened on Capitol Hill, not since 1976 when Richard Nixon was about to be ousted. That reference alone speaks volumes as to what lies at stake for Trump.

Time magazine ran the headline: "Should President Trump Have the Sole Power to Launch Nuclear Missiles?"

Senator Chris Murphy (D) set the tone and purpose of the hearing by saying: "We are concerned the President of the United States is so unstable, is so volatile, and has a decision-making process that is so quixotic that he might order a nuclear weapons strike that is wildly out of step with US security interests."

Hinting at the severe constitutional implication, Murphy added: "So let's just recognize the exceptional nature of this moment, of this discussion we're having today."

Related Topic(s): Coup; Korea; Military; Trump Mental State; Trump Threats, Add Tags
Add to My Group(s)
Go To Commenting
The views expressed herein are the sole responsibility of the author and do not necessarily reflect those of this website or its editors.