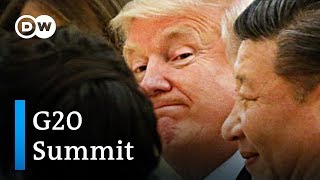 The G20 summits are nominally about how the world's biggest national economies can cooperate to boost global growth. This year's gathering -- more than ever -- shows, however, that rivalry between the US and China is center stage.

Zeroing in further still, the rivalry is an expression of a washed-up American empire desperately trying to reclaim its former power. There is much sound, fury and pretense from the outgoing hegemon -- the US -- but the ineluctable reality is an empire whose halcyon days are a bygone era.

Ahead of the summit taking place this weekend in Argentina, the Trump administration has been issuing furious ultimatums to China to "change its behavior." Washington is threatening an escalating trade war if Beijing does not conform to American demands over economic policies.

Nevertheless, if Beijing does not comply with US diktats then the Trump administration says it will slap increasing tariffs on Chinese exports.

The gravity of the situation was highlighted by the comments this week of China's ambassador to the US, Cui Tiankai, who warned that the "lessons of history" show trade wars can lead to catastrophic shooting wars. He urged the Trump administration to be reasonable and to seek a negotiated settlement of disputes.

The problem is that Washington is demanding the impossible. It's like as if the US wants China to turn the clock back to some imagined former era of robust American capitalism. But it is not in China's power to do that. The global economy has shifted structurally away from US dominance. The wheels of production and growth are in China's domain of Eurasia.

For decades, China functioned as a giant market for cheap production of basic consumer goods. Now under President Xi Jinping, the nation is moving to a new phase of development involving sophisticated technologies, high-quality manufacture, and investment.

It's an economic evolution that the world has seen before, in Europe, the US and now Eurasia. In the decades after the Second World War, up to the 1970s, it was US capitalism that was the undisputed world leader. Combined with its military power, the postwar global order was defined and shaped by Washington. Sometimes misleading called Pax Americana, there was nothing peaceful about the US-led global order. It was more often an order of relative stability purchased by massive acts of violence and repressive regimes under Washington's tutelage.

In American mythology, it does not have an empire. The US was supposed to be different from the old European colonial powers, leading the rest of the world through its "exceptional" virtues of freedom, democracy and rule of law. In truth, US global dominance relied on the application of ruthless imperial power.

The curious thing about capitalism is it always outgrows its national base. Markets eventually become too small and the search for profits is insatiable. American capital soon found more lucrative opportunities in the emerging market of China. From the 1980s on, US corporations bailed out of America and set up shop in China, exploiting cheap labor and exporting their goods back to increasingly under-employed America consumers. The arrangement was propped up partly because of seemingly endless consumer debt.

That's not the whole picture of course. China has innovated and developed independently from American capital. It is debatable whether China is an example of state-led capitalism or socialism. The Chinese authorities would claim to subscribe to the latter. In any case, China's economic development has transformed the entire Eurasian hemisphere. Whether you like it or not, Beijing is the dynamo for the global economy. One indicator is how nations across Asia-Pacific are deferring to China for their future growth.

Washington likes to huff and puff about alleged Chinese expansionism "threatening" US allies in Asia-Pacific. But the reality is that Washington is living in the past of former glory. Trading blocs like the Asia-Pacific Economic Cooperation (APEC) realize their bread is buttered by China, no longer America. Washington's rhetoric about "standing up to China" is just that -- empty rhetoric. It doesn't mean much to countries led by their interests of economic development and the benefits of Chinese investment.

One example is Taiwan. In contrast to Washington's shibboleths about "free Taiwan," more and more Asian countries are dialing down their bilateral links with Taiwan in deference to China's position, which views the island as a renegade province. The US position is one of rhetoric, whereas the relations of other countries are based on material economic exigencies. And respecting Beijing's sensibilities is for them a prudent option.

Related Topic(s): American Exceptionalism; American Insurgency; American_History; China Politics; G20 Summit, Add Tags
Add to My Group(s)
Go To Commenting
The views expressed herein are the sole responsibility of the author and do not necessarily reflect those of this website or its editors.