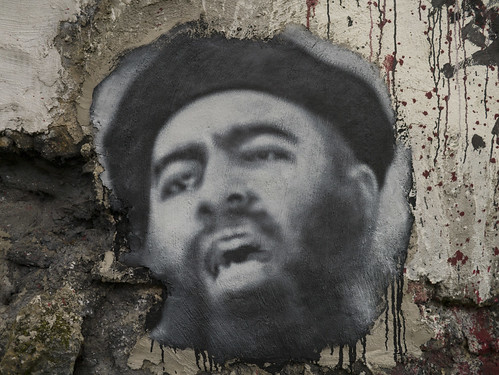 Who defeated the Islamic State In Syria?

Before answering that question. What is the ISIS? Can the public overcome its chronic amnesia and think back to the sudden appearance of ISIS dressed in brand new black uniforms, gleaming white NIKE's and driving Toyota trunks? They seemed to appear out of nowhere in 2014. ISIS looked as if it were a mirage when it appeared, or more likely a CIA staged scene from Hollywood.

No sooner had ISIS appeared than it went on a head chopping binge that repulsed and frightened the US public. Washington officials, including Secretary of State John Kerry rang the alarm that this hoard of Islamic crazies wanted to invade the US and "kill us all". A well-compliant mainstream media swallowed Washington's script and regurgitated it to frighten a US public. The public gave its silent consent for more war really aimed at Bashar al-Assad.

The next question is who created ISIS? ISIS "can trace its roots back to the late Abu Musab al-Zarqawi, a Jordanian. In 2004, a year after the US-led invasion of Iraq, Zarqawi pledged allegiance to Osama Bin Laden and formed al-Qaeda in Iraq" [ BBC News December 2, 2016 ]. Al-Qaeda in Iraq did not exist until after the US invasion by the Bush-Cheney administration.

The US invasion of Iraq was based on pure unadulterated lies that Saddam Hussein supported al-Qaeda, was involved in the September 11, 2001 attacks on the US and had weapons of mass destruction. Al-Qaeda in Iraq was predictable blowback, resistance against a US illegal invasion. Bush who admitted that he creates his own reality, had hallucinations of a grateful Iraqi people, who had just been bombed back to the Stone Age with Shock and Awe, throwing kisses and flowers at the US expeditionary force as liberators.

Then came the failed Surge in 2007 [ The Nation], when the US allied with Sunnis to defeat the remnants of the Iraqi Ba'ath Party, which was an Arab Nationalist Party neither Sunni nor Shia. The cynical sponsoring and siding with radical Islam goes back to the British "Great Game" of the early 1900's. It was the British double-dealing with both Sunnis and Shias to supplant the Ottoman Empire, and turn Sunni against Shia to divide and conquer Southwest Asia. It is the story of Lawrence of Arabia, Winston Churchill and World War One.

One could then pick up the story after World War Two when the US was opposing Arab anti-colonial nationalism and communism during the Cold War. It was the "Grand Chessboard" strategist Zbigniew Brzezinski who convinced Jimmy Carter in 1980's to back the Islamic radical mujahideen mercenaries and destroy Afghanistan in order to lure the Soviet Union into a Vietnam-type trap. Brzezinski was so proud of his success that he would later rhetorically ask to his shame, which is more important "Some stirred-up Moslems" or winning the Cold War.

If Brzezinski was so clever he would have learned from the British early 1900's Southwest Asia super spy Gertrude Bell. As she would later say, the British Empire encouraging and sponsoring of radical Islam backfired into a big failure. But the US does not know history, even its own history of repeated blunders of encouraging and sponsoring radical Islam against Arab anti-colonial nationalism.

So instead the US enlisted the most radical right-wing fascist regime in the history of the world, the Absolute Monarchy of Saudi Arabia to bankroll Sunnis against Arab nationalism. They gladly funded US regime change projects against secular Arab states. The US flush with cash from the Saudis went about encouraging, training and paying mercenaries from all over Southwest Asia to overthrow Bashar al-Assad. Assad did not share the US role as the world leader of capitalist globalization. Instead Assad was using Syria's wealth for the benefit of the Syrian people, just as Saddam Hussein and Muammar Gaddafi. " Assad must go", chanted Obama, Clinton, Kerry and Saudi Wahhabis. To the US it did not matter how many Syrians, Libyan or Iraqis died. As Madeleine Albright had said, "500,000 dead Iraqi children are worth it".

It was the US and its allies the Absolute Kingdom of Saudi Arabia and the Gulf States that created ISIS. Mercenaries from all over the Muslim world were recruited and even supported with their own air force, the United States Airforce. The mainstream media gave the US the cover story the US was backing "well-vetted moderate ['Jeffersonian democrats' really] Islamists". The mainstream media are criminal coconspirators for spreading war propaganda, the Guardian being one of the worst offenders, with a few rare exceptions, such as Trevor Timm's reporting.

Now with the ringing in of the 2018 New Year, we can expect the US to be patting itself on the back for defeating ISIS in 2017 . The real story is that it was Assad, Russia, Hezbollah and Iran that defeated ISIS (so far). For those without amnesia they may remember back to when Russia released videos of endless convoys of black-market ISIS oil tankers heading into Turkey. ISIS was partially funding itself with stolen oil and enriching black marketeers of Recep Tayyip Erdogan.

Somehow, the US with all of its technology and thousands of bombing missions in Syria never saw all those tankers. Nor could they find ISIS fighters, so instead they bombed the Syrian army. The US only saw what it wanted to see and what it wanted to bomb. It was not ISIS. Here are the videos of Russian jets taking out ISIS oil tankers:

Related Topic(s): Al-Qaeda; Assad; Hezbollah; Iran; Iraq; Syria, Add Tags
Add to My Group(s)
Go To Commenting
The views expressed herein are the sole responsibility of the author and do not necessarily reflect those of this website or its editors.