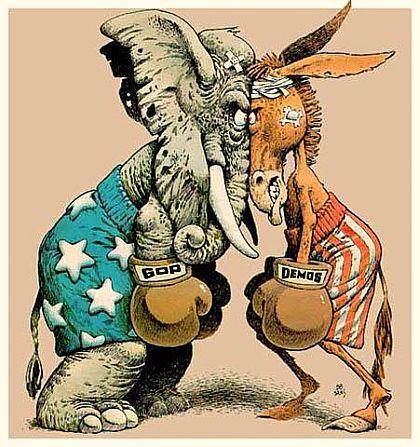 Rodney Alexander, a six-term Republican Congressman from Louisiana, announced Tuesday that he's tired of the partisan gridlock on Capitol Hill and is getting the hell out.

Said Alexander in a statement released by his office:

"Rather than producing tangible solutions to better this nation, partisan posturing has created a legislative standstill. Unfortunately, I do not foresee this environment to change anytime soon. I have decided not to seek reelection, so that another may put forth ideas on how to break through the gridlock and bring about positive change for our country."

Some may consider it a surprise that such a statement is coming from a member of a party so often blamed for the partisanship that has created such a political morass in Congress.

But those who blame Republicans solely for the mess on Capitol Hill are part of the very problem that Alexander is talking about. So are those who lay the blame entirely on Democrats.

Partisanship is bi-partisan in Washington. Both parties live under its banner and genuflect to whatever phony ideals either side claims to stand for.

While both claim to stand for what they claim is best for America what they really embrace is absolute power and complete control of a government that once functioned far more efficiently under moderation, cooperation and coalitions.

When I arrived in Washington in 1981 as a press secretary and legislative assistant to Republican Congressman Paul Findley from Illinois, our office in the Rayburn Building on Capitol Hall was right across the hall from Democrat Melvin Price, whose district lay just south of Findley's. Findley and Price met often and worked on compromises to serve the nation, their districts and their state.

They worked together on passage of a compromise budget supported by both Republican President Ronald Reagan and Democratic Speaker of the House Tip O'Neill.

Yes, there were differences between Findley and Price and between the Republican and Democratic factions of Congress but, more often than not, we worked through those differences and managed to pass budgets, appropriations bills and other laws that benefited America.

The same spirit of cooperation worked in my later role as chief of staff and then later as special assistant to the ranking Republican of the House Committee on Science and Technology -- Rep. Manuel Lujan of New Mexico.

Rep. Bob Michel of Illinois served as the ranking Republican of the House in those days and he saw compromise and conciliation as the way to get things done. He faced opposition from a militant group of new Congressmen led by the flamboyant Newt Gingrich of Georgia.

I left Capitol Hill in 1987 to take over the political programs division of the National Association of Realtors. In 1994, Republicans captured control of the House and Gingrich became Speaker of the House and the mood in Congress changed as cooperation and coalitions collapsed under a "my way or the highway" approach.

That mood continued when Democrats later won back control as Nancy Pelosi served more as an agent of revenge in the Speaker's office. It continues today under the autocratic Republican leadership of the House under John Boehner and the equally gridlock-dominated style of Harry Reid in Democratic control of the Senate.

What's best for the nation no longer matters in Washington. Partisanship rules and America loses.

Related Topic(s): American Hypocrisy; Partisanship; Republican, Add Tags
Add to My Group(s)
Go To Commenting
The views expressed herein are the sole responsibility of the author and do not necessarily reflect those of this website or its editors.

Can, or should, America be saved?