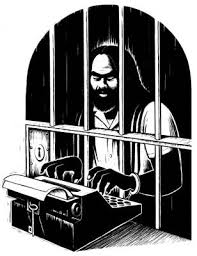 Last week, on Easter Sunday, I presented Jose Mujica as a model president. Mujica, I pointed out, presided over Uruguay from 2010 to 2015. He had been a Marxist Tupamaros (Robinhood) guerrilla since his student days. He was arrested, imprisoned and tortured for 12 years -- 3 of them spent in solitary confinement at the bottom of a well. As president, he introduced profound changes in Uruguayan politics. He took important steps towards the legalization of all drugs in an effort to defeat his country's drug gangs.

But perhaps Mujica's most impactful step came in the example he set for national chief executives everywhere by rejecting the typical presidential lifestyle. He gave away 90% of his yearly salary to the poor and dedicated that money to providing housing for the country's homeless. He sold the presidential limousine in favor of retaining his old Volkswagen beetle. He continued living with his wife in his run-down peasant farmhouse.

In my frustration over this year's Hobson's choice between Trump and Biden, I couldn't help thinking: what if we chose a U.S. president who did something like that? What if, instead of looking for leadership in billionaires like Trump or lifelong politicians like Biden, we elected someone like Jose Mujica a peasant, a worker, a radical thinker? How would that change American politics? How would that change the world?

What if we elected someone like Mumia Abu-Jamal? Abu-Jamal, of course, is the Marxist Black Panther journalist who had spent years as a political prisoner on death row. Allegedly he killed a Philadelphia police officer in 1981-- a charge he has always vehemently denied. In any case, he regularly publishes insightful, edgy commentary from prison and is often interviewed on NPR and programs like "Democracy Now." What if Mumia were our president?

I raise those questions because they're suggested by the readings for this second Sunday of Easter. They expose us to the shocking fact that "resurrection" for the first Christians turned everything completely upside-down. They actually embraced communism and recognized as their savior a worker, a victim of capital punishment from death row. Yes, they embraced the communist ideal that inspired both Mujica and Mumia Abu-Jamal.

The readings are brilliant and timely in that they not only give us an insight into the primitive Christian community. They also urge us to turn our own politics upside-down. They do so first by offering an abstract description of the original Christian community, and then by fleshing out that description with narrative about a key encounter between a skeptic and the risen Christ who embodies the basis of the communist vision -- identification with society's victims and despised.

Here are my "translations" of today's readings. You can find the originals here to see if I've got them right:

ACTS 2: 42-47: The first Christians were communists. Following the teachings of Jesus, they prayerfully shared meals each day and all their possessions from each according to ability to each according to need. Their example was so awe-inspiring that everyone loved them, and their numbers grew rapidly.

PSALMS 118: 2-4, 13-15, 22-24: Christian communalism was a dim reflection of the benevolence of Life Itself as demonstrated in nature and throughout human history. No one truly owns anything; it's all GIFT. Though unrecognized by the world, renouncing private property is the rejected cornerstone of human community -- the key to surmounting every human problem. Accepting this truth, even in the worst of times, those committed to justice manifest super-human strength, courage, and joy.

FIRST PETER: 1: 3-9: It's as if they were all born again into a new creation filled with hope that is stronger than death itself. Talk about inheritance! Communal sharing has made those who accept it richer than kings and their vast storehouses of gold. They've experienced the very goal of history even though the world's opposition to sharing obscures the fact that they are on the right path -- the one blazed by Jesus himself (and the other great divine incarnations). There is no other portal to human happiness.

JOHN 20: 19-31: Fear of the world, its violence and opposition to Jesus' communalism has intimidated us into denying his way. Yes, we're all denialists like the one they called "The Twin" (Didymus). He is our double in rejecting in absentia Jesus' Holy Spirit of peace and forgiveness, of sharing and community that make peace possible. Correcting false perception means recognizing Christ himself in those the world has wounded and assassinated for daring to follow him.

Please do read for yourselves today's first reading, ACTS: 2: 42-47. It's significant that on this week after Easter, the passage immediately directs us not to "spiritual" concern with heaven and the afterlife, but to material property, land and the primacy of the marginalized in organizing community life. Here's a fuller description of the way the early Christians lived. You'll find it in ACTS, Chapter 4:

Related Topic(s): Capitalism; Communalism; God; Happiness; Jesus; Mujica; Mumia Abu-jamal; Peace; Resurrection; Sunday; (more...) Trump, Add Tags  (less...)
Add to My Group(s)
Go To Commenting
The views expressed herein are the sole responsibility of the author and do not necessarily reflect those of this website or its editors.