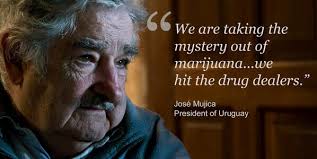 On this Easter Sunday, I want to tell you a story of resurrection. It involves the ex-president of Uruguay, Jose Mujica, and his personal transcendence after three years in a tomb. It's about how he advanced not only his country's resurgence from its profound drug problem, but from a pattern of corrupt oppressive government.

The story is intimately connected with that of the poor man, Jesus, whose immortality billions celebrate today. As today's readings tell us, this healer, teacher and champion of the poor spent three days in a tomb and is more alive today than ever he was 2000 years ago.

Focus on Mujica's story comes from a personal experience that I had last January when I spent a couple of weeks at the border in Tijuana Mexico. There I worked with pro bono lawyers and volunteers offering legal help to immigrants, refugees and asylees. The group is called Al Otro Lado.

In helping clients fill out paperwork, I discovered that most of the Mexicans, Hondurans, Guatemalans, and others I interviewed were driven from their countries of origin by drug gangs.

On the one hand, the experience made me think in general about drugs, addiction, and our country's century-long "War on Drugs." On the other hand, it drove me to reflect more deeply on resurrection and the possibilities for new life we celebrate on this Easter day.

The War on Drugs

Start with the war on drugs. Of course, we're no closer to winning it than when first it began in 1914. (Before then, you could buy cocaine-based remedies, for example, at your local drug store and at a low price.)

Moreover, so many of the problems that plague our world can be traced back to that spectacularly unsuccessful war. It's not just the addiction and the gangs. It's also the billions upon billions of dollars that have been wasted, the corruption of governments and law enforcement agencies throughout the world, the millions of users who have been incarcerated or forced to leave their countries by drug gangs, as well as the thousands upon thousands who have been murdered by them and their police mob counterparts.

It all made me think: what if there were no drug war? What if drugs were entirely legal again? Wouldn't that drive the gangs out of business? And wouldn't all those other related problems disappear? Wouldn't that lead to a kind of resurrection of humanity?

Think about it. Drug decriminalization and legalization would profoundly change the world!

But you might wonder (as I did) wouldn't drug decriminalization and legalization also vitiate the planet? Wouldn't our kids (and maybe we ourselves) all get hooked and end up staggering around in drug-induced stupors?

As it turns out, the answer is No. As Johann Hari points out in his page-turner study, Chasing the Scream, less than 10% of those who use even cocaine, crack, and Oxycontin get hooked. The other 90% often take those controlled substances for recreation every weekend (and even on weekdays) and still carry on normally in their families. They hold steady jobs and contribute to their communities. Even those who become addicted mature out of their problem after about 10 years. This means that the War on Drugs, laws against narcotics, and the resulting havoc are connected with something like 10% of users.

All of this is because drug addiction is not the result of chemical "hooks," so that anyone taking them becomes ipso facto obsessed. Instead, addiction is caused primarily by personal and social problems connected with childhoods marked by abuse, with loneliness, meaningless work, and lack of human connection.

Addictions are psychological and social diseases. They are not crimes. Punishing drug use as criminal only causes more drug use by aggravating its causes.

Related Topic(s): Easter; Faith; Immigration; Jesus; Law; Mujica; Resurrection; Sunday; World Issues, Add Tags
Add to My Group(s)
Go To Commenting
The views expressed herein are the sole responsibility of the author and do not necessarily reflect those of this website or its editors.