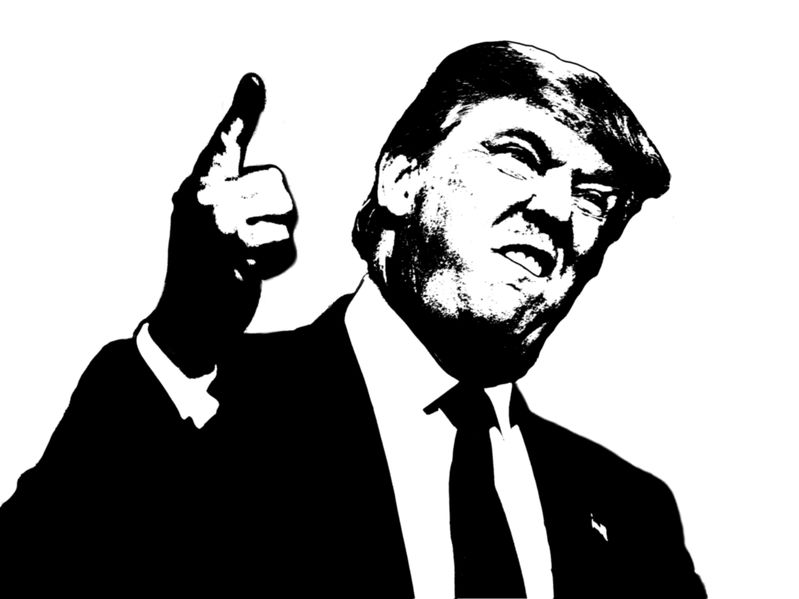 Was Donald Trump's rise to power foreseen in 1968 while America was engaged in a conflict that resulted in 16,500 American and almost 28,000 South Vietnamese soldiers' deaths in that year alone?

Friday the 13th, 2019 is a day that will forever be stained in the minds of Americans for generations, and should society survive centuries to come. Not as much for the vote on the Articles of Impeachment of Donald Trump; but for what will follow and how people of conscience will act.

During the 1968 premiere week of Mr. Rogers Neighborhood the "NEIGHBORHOOD NEWS" newspaper headline was held aloft.

"Cause we're on top," the King responded.

Edgar replied, "that's right because we're... at least you're on top!"*

Use your imagination for who might represent the changers. Perhaps anyone with an open mind who sees a U.S. President whose behavior is troubling and downright dangerous to all Americans.

And who today might be represented by the King who back in 1968 used barbed wire for his wall, was against all change and views himself as on top, bigger, greater and better than anyone else?

Of course, I'm being facetious about the Mr. Rogers connection. However, it is perhaps an omen that the King's name - Friday XIII was the same as the day of the week that the weak as water Democrats finally overcame all the political justification and puerile excuses for not calling for Donald Trump's impeachment.

Not in time to save the lives of children separated from their parents who died from diseases while living in cages - or our Kurdish allies who lost their lives because their enemies were emboldened by Donald Trump's Syrian withdrawal.

To those who are familiar with Mr. Rogers he was a symbol of stability, gentility and reassurance for young children living in scary times. These are scary times! How many of you adults are concerned about the direction in which our country is heading?

The reality - we will never change the haters! The racist, white supremacists who make up the gooey, slimy core of die-hard Trump supporters.

Nowadays it seems virtually impossible to have open and frank discussions with any Trump supporters, even those who are not members of the rancid underbelly of America.

Recently I tried to hold a discussion about the state of our education system with a woman wearing a tee-shirt emblazoned with Women for Trump 2020. I tried my hardest to discuss learning issues and ultimately was told that "Democrats are killing children and that if you are not for Donald Trump you are against America." I won't be drinking out of her Kool-Aid bottle!

I don't want to make light of this.

Unless you are a political junkie or an avid cable T.V. watcher you have no idea of the twisted, partisan and totally lacking any sense of reality mainstream Republican politicians positions. It is scary! It is almost impossible to believe they believe what they say.

And, as a believer in the basic goodness of humankind, I find it unthinkable that they are staking their positions, reputations and place in history simply to attempt to get re-elected. Yet, I can find no other answer.

The Republican politicians who refuse to acknowledge the dangerous and un-American behavior of Donald Trump are damaging our nation in unconscionable ways. To me they are far more to blame for the situation in which we find ourselves than the President who clearly has issues!

That the Republican leadership by not censuring him has empowered one individual to dismantle so much that makes America great is shameful.

To those of you who have tuned out because you are simply tired of it all - you need to tune back in! Donald Trump will not be expelled from office! He and his minions are destroying America and he may well get reelected in 2020.

Do your due diligence and see Donald Trump's very possible path to reelection.

Then think about our country, your children and grandchildren and threats to our very existence -- like climate change that Republicans refuse to acknowledge.

Donald Trump is fomenting a virtual civil war. Top Republicans are aiding him. Average American citizens are being lied to by their representatives and outlets like FOX News.

Many Democratic politicians initially fought impeachment because it might not be good for their reelection efforts. Shame on them. Had they taken action sooner lives might have been saved. There comes a time when acting on principle is the only right course of action!

Our political system is broken, many of our politicians on both sides of the aisle are either corrupt, ineffectual or simply not up to the task at hand.

Impeachment is not the issue. Being a progressive or a conservative is not what's important. America is on a precipice. People of conscience can no longer tune out what is happening on the political landscape because they find it uncomfortable. The air we breathe, the water we drink, the food we eat, the sustainability of our planet and life as we know it in the 21st Century are at stake.

Individuals from a variety of faiths believe that "the end is near." One thing is certain. If we don't all begin to take responsibility for electing politicians committed to creating a safer, friendlier, gentler and more enlightened nation the end will come sooner rather than later.

Pick the positions and politicians that you feel will protect America for the next millennium and then go out and get them elected. Act as if your life depends upon it. It does.

As far as Mr. Rogers goes, wouldn't it be great if we simply treated each other, regardless of our views with the kind of respect found in his neighborhood!!

*All Mr. Rogers quotes were taken from the 2018 film Won't You Be My Neighbor?

STAY IN THE KNOW
If you've enjoyed this, sign up for our daily or weekly newsletter to get lots of great progressive content.
Series: "Creating a Progressive Democracy"