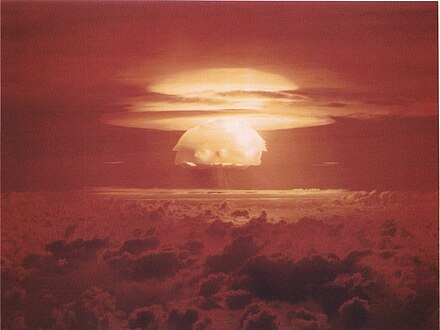 We live in the most dangerous times of world history.

It certainly isn't because of COVID-19, the ravages of a new economic depression soon to beset the US and the world or even climate change and global warming.

No, it's the specter of nuclear war that makes this being the most dangerous time.

Even during the cold war between the US and the Soviet Union there at least was a mutual understanding that if either side initiated a nuclear war it would be annihilated in a retaliatory nuclear strike by the other. It was called MAD, mutually assured destruction.

Now it seems MAD no longer prevails. The US has renounced all but one nuclear arms control agreement-brokered with the USSR and now with Russia. - and initiated a 10 year, trillion dollar "modernization" project of its nuclear weaponry.

In particular the INF treaty initiated in 1987 limiting intermediate range nuclear missiles terminated by Trump in 2019 and the New Start treaty initiated in 2011, reducing strategic nuclear arsenals, and set to expire in February, 2021 but can be extended up to 5 years.

In 2018 the Pentagon released its Nuclear Posture Review in particular naming Russia and China as threats along with North Korea and Iran. The review wants to come across as deterring adversaries yet nuclear weapons dominance seems its real intent.

Retired. The author of "DECEIT AND EXCESS IN AMERICA, HOW THE MONEYED INTERESTS HAVE STOLEN AMERICA AND HOW WE CAN GET IT BACK", Authorhouse, 2009
Related Topic(s): Dangerous; History World; Holocaust; Nuclear; Time, Add Tags
Add to My Group(s)
Go To Commenting
The views expressed herein are the sole responsibility of the author and do not necessarily reflect those of this website or its editors.