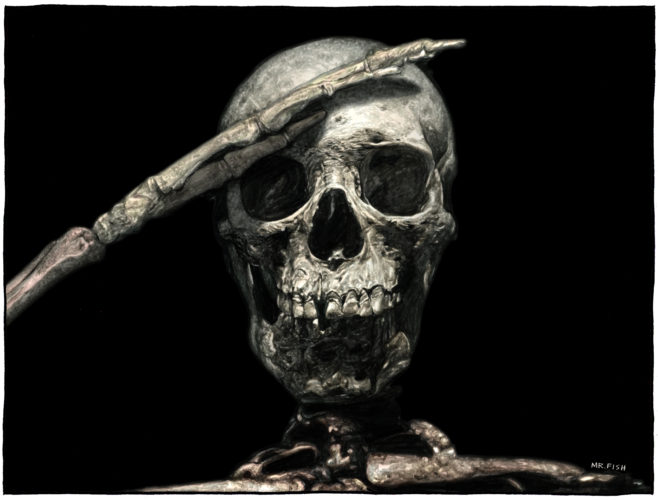 Over 50,000 soldiers were killed, wounded or reported missing here in July 1863, many of them dying in terrible agony on the battlefield or carted off to improvised hospitals where arms and legs were swiftly amputated and tossed into large heaps on the floor. Abysmal hygiene -- surgeons would nonchalantly wipe the blood from their bone saws on their pus-stained smocks and move on to the next victim -- caused infection, blood poisoning and gangrene. To buy time, regiments such as the 1st Minnesota were ordered into battle against superior forces and as a result were decimated within minutes. Hundreds of African American men, women and children, many born free in the surrounding Pennsylvania towns, were abducted by invading Confederate forces led by Gen. Robert E. Lee and shipped south to be sold in the slave markets in Richmond, Va. Confederate and at times Union forces looted homes, farms and shops. For three days in the summer of 1863, there was an orgy of destruction, death and suffering on this ground.

An estimated 750,000 soldiers were killed by combat, accident, starvation and disease in the Civil War, more than in all other American wars combined, according to a 2012 stud y. Rifled muskets and rifled artillery vastly increased the range and accuracy of fire over the 18th century's smooth-bore muskets and cannons, but the advance in weaponry did nothing to perturb the generals who clung to outdated and now suicidal tactics. They sent their soldiers marching forward in parade-ground lines into murderous volleys as if they were on a Napoleonic battlefield. The inability of most generals to adapt, as Allen C. Guelzo writes in "Gettysburg: The Last Invasion," "makes the Civil War look like an exercise in raw stupidity equivalent to the slaughters on the Western Front [of World War I]."

I am descended from one of three brothers who fought at Gettysburg. Clark S. Edwards was a Union general. Albert M. Edwards was a colonel in the elite Iron Brigade. Congress voted in 2018 to award him a posthumous Medal of Honor. David A. Edwards is my great-great-grandfather. He was a sergeant in the 5th Maine, and his war diaries, letters, brass cartridge box plate and pocket watch are next to me as I write.

The brothers were from Bethel, Maine. David was wounded in his right arm in 1864, days after the Battle of the Wilderness in northeast Virginia. As he walked back from the front lines looking for a field hospital, he saw what had become a depressingly familiar sight, wounded men screaming and writhing in agony amid the dead. He would be haunted as much by the aftermath of Civil War battles as the fighting itself.

"Cold and rainy," David wrote in his diary on May 12, 1864. "2nd Corps captured a rebel division of infantry, 3 major generals, took their works, 25 guns. Our division sent to support them. We made a charge on pits. I received a wound in the right arm. Went to the rear."

Four days later, on May 16, he wrote: "Still in Fredericksburg, nothing to eat, no care, nothing that we need."

As a boy I hiked to the top of Monument Hill in Leeds, Maine. On the summit is a 30-foot-high granite obelisk erected by the Union general and fierce abolitionist Oliver Otis Howard, who was from Leeds. He lost his right arm in the Battle of Fair Oaks/Seven Pines in a June 1862 action for which he was awarded the Medal of Honor. After the war he was the commissioner of the Freedmen's Bureau and helped found historically black Howard University in Washington, D.C., serving as the school's president from 1869 to 1874. He called his obelisk a peace monument and inscribed on it: "Peace Was Sure 1865." Howard railed against the glorification of war, writing, "We cannot well exaggerate ... the horrors, the hateful ravages, and the countless expense of war." Stories of war, he said, should serve only one purpose, to "show plainly to our children that war, with its embodied woes and furies, must be avoided."

By focusing on battlefield exploits we too often blot out the suffering of the soldiers, the families that lost sons, brothers and husbands, and the hundreds of thousands of children left without fathers. We ignore the crippling physical and psychological wounds that plague veterans. Units in the Civil War were raised locally. Towns and villages could within one day of heavy fighting lose a third or more of their men, plunging entire populations into collective grief. Maine, per capita, sent more men to war than any other Northern state. There is hardly a town in Maine that does not have a Civil War memorial with a shockingly long list of names. The weight of the loss was still felt when I was a boy in the 1960s, especially, in my case, because my grandmother lived with her grandfather, David, the onetime sergeant, until he died when she was eight. He was wracked by pain from his wound until the end of his life.

"Burial Parties were sent out, and those who could get away from their commands went out to view the scene of carnage, and surely it was a scene never to be forgotten," wrote a New Jersey soldier. "Upon the open fields, like sheaves bound by the reaper, in crevices of the rocks, behind fences, trees and buildings; in thickets, where they had crept for safety only to die in agony; by stream or wall or hedge, wherever the battle had raged or their waking steps could carry them, lay the dead. Some with faces bloated and blackened beyond recognition, lay with glassy eyes staring up at the blazing summer sun; others, with faces downward and clenched hands filled with grass or earth, which told of the agony of the last moments. Here a headless trunk, there a severed limb; in all the grotesque positions that unbearable pain and intense suffering contorts the human form, they lay. Upon the faces of some death had frozen a smile; some showed the trembling shadow of fear, while upon others was indelibly set the grim stamp of determination. All around was the wreck the battle-storm leaves in its wake -- broken caissons, dismounted guns, small arms bent and twisted by the storm or dropped and scattered by disabled hands; dead and bloated horses, torn and ragged equipments, and all the sorrowful wreck that the waves of battle leave at their ebb; and over all, hugging the earth like a fog, poisoning every breath, the pestilential stench of decaying humanity."

The miasma of rotting bodies after the Battle of Gettysburg, exacerbated by the carcasses of 5,000 horses and mules, lingered for weeks. Residents in the town of Gettysburg had to cover their mouths and noses when they went outside.

"A sickening, overpowering, awful stench announced the presence of the unburied dead upon which the July sun was mercilessly shining and at every step the air grew heavier and fouler until it seemed to possess a palpable horrible density that could be seen and felt and cut with a knife ...," wrote Cornelia Hancock, a Union nurse at Gettysburg.

Time has long since erased these gruesome sights and smells from the battlefield national park, along with the disorienting confusion, fear and deafening noise of combat. The groomed fields and undulating hills are dotted with stately monuments to Civil War units and leaders. The park memorializes the aspect of the battle and the war the state wants us to memorialize. It tells us that honor, glory and courage, true patriotism, come from serving the state, although, as Ulysses S. Grant said, the Confederate cause was "one of the worst for which a people ever fought."

The Gettysburg park implicitly celebrates nationalism and elevates the warrior caste. The Confederates, fighting to preserve slavery, have, with the deified Lee, been admitted into our pantheon of national heroes because of their martial valor. The cruelty and folly of war, along with the holocaust of slavery and the widespread grief and suffering caused by the staggering numbers of dead and wounded, are treated as tangential aspects eclipsed by the great sacrifice.

I stood on Little Round Top, a hill within the park where the breastworks erected by the 5th Maine are still visible. David, who fought there, had little use for senior officers, including his brother the general, who like many other generals callously sent men to be slaughtered to burnish battlefield credentials. In a letter to his wife dated Aug. 16, 1864, from the hospital at Camp Fry in Illinois he calls his brother "a miserable, lying scoundrel" who is "devoid of any moral or manly principle or honor." "His nature is composed of selfishness and egoism," he added.

Related Topic(s): Death; Gettysburg; History; Soldiers; Sons; Suffering; Veterans, Add Tags
Add to My Group(s)
Go To Commenting
The views expressed herein are the sole responsibility of the author and do not necessarily reflect those of this website or its editors.