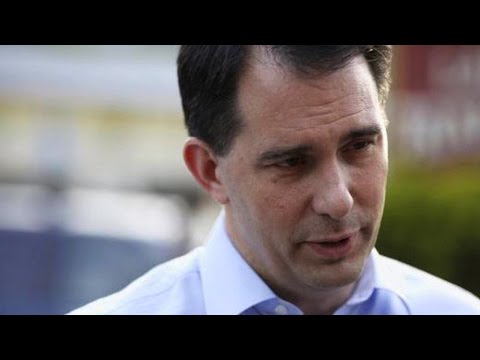 Voter ID_Up to 300,000 Wisconsin Voters Could Be Barred from Polls Thanks to Scott Walker
(Image by YouTube, Channel: Democracy Now!)   Details   DMCA

Democrats had crushed it seven elections in a row, helped by the massive vote from the famously progressive, activist University of Wisconsin student population.

But then, on Election Day 2016, a giant hunk of the student vote simply...vanished. And the Milwaukee Black vote also seemed to just...disappear.

And, if Wisconsin's voter vanishing operation isn't rooted out, 2020 will be de'jà vu all over again. If Trump swipes this swing state again, he's as good as inaugurated.

Where did they go, the voters who mysteriously didn't show up? I flew to Wisconsin just before the COVID lockdown to hunt down the students and voters of color who, mysteriously, did not show up.

The first thing that caught my attention: While the rest of the nation had massive voter turnout in 2016, in parts of this down-to-the-wire state, voting fell off a cliff. Which parts? In Black-majority Milwaukee, turnout plummeted from 66 percent to 56 percent of the voting-age population. That's strange.

And Wisconsin's student vote evaporated. Nationwide, only two states recorded a drop in student voting. Wisconsin's drop was breathtaking: In-precinct voting by students declined by a third, from 67 percent to 49 percent.

They didn't need to drag the local lakes to find the missing students and Black voters. They were disappeared in plain sight by the Republican legislature under laws crafted by Wisconsin's radical-right governor, Scott Walker.

One new law required a government photo ID to vote. But the photo ID issued by the state to its 182,000 University of Wisconsin students did not qualify them for voting nor for registration.

How brilliant is that? Gun permits could be used to vote; but not student ID. Carry a weapon, good. Carry a book, forget it.

A Wisconsin driver's license would do. But not everyone has a license. Who doesn't drive? People who don't have cars students in Madison, low-income renters who take the bus in Milwaukee, i.e. voters of color. And the color is Democratic Blue.

Greg Palast's investigative reports appear in Rolling Stone, the Guardian and on BBC Television. His latest film, The Best Democracy Money Can Buy, on how Donald Trump stole the 2016 election, is available on Amazon. Palast is Patron of the Trinity (more...)
Related Topic(s): 2016 Elections; 2020 Elections; Trump Racist; Vote Suppression; Voter Fraud; Voter Rolls Purged; Wisconsin Politics, Add Tags
Add to My Group(s)
Go To Commenting
The views expressed herein are the sole responsibility of the author and do not necessarily reflect those of this website or its editors.