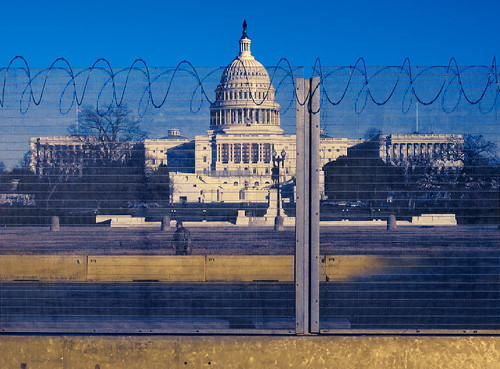 2021.01.22 DC Street, Washington, DC USA 022 30214-Edit
(Image by tedeytan)   Details   DMCA
There is a pall hanging over the 117th Congress, an air of futility and outright lunacy. We face economic, health and climate crises requiring our national government to think and act big on the scale of a war mobilization. House Democrats are passing urgently needed measures. But a fanatically anti-democratic and anti-government GOP minority in the Senate is using an outdated procedural rule (the filibuster) to obstruct them. Democrats have the power to change this rule but seem afraid to do so. As a result, we are edging over a precipice.

Under the Senate filibuster rule, a bill can pass with a simple (50+1) majority, but if even a single senator objects, then debate on the bill cannot be ended without a 60-vote majority. This creates a 60-vote threshold for any bill that is controversial. The Democrats' current Senate 'majority' is only 50 plus a tie-breaking vote by Vice President Harris.

For an entire month (until Feb.3) Senate committees were unable to function because the Senate hadn't passed a new organizing resolutionit was still operating on the resolution from the previous Congress when Senate Republicans were in the majority. Mitch McConnell was filibustering the new organizing resolution in order to get a commitment from the Democrats not to end the filibuster rule. This absurd impasse finally ended when two Senate Democrats Joe Manchin (D-WV) and Kyrsten Sinema (D-AZ) publicly stated that they would not vote to eliminate the filibuster.

McConnell's month-long obstruction should have been enough to get Senate Democrats to use what is known in Senate-speak as "the nuclear option"Senate rules can be changed by a simple majority. If all 50 Democrats and the Vice President agreed, they could end or modify the filibuster rule. Part of what holds them back is a nostalgic fantasy about Republicans as "colleagues," as if there were still some value in being bipartisan or any hope of good-willed negotiation. The Democrats' desire for collegiality has gone unrequited at least since Oct. 23, 2010, just before the mid-term election, when McConnell told an interviewer: "The single most important thing we want to achieve is for President Obama to be a one-term president." His goal was power, and policy was only a means.

In the last few months, the GOP has gone way beyond legislative obstruction. As Fintan O'Toole argues in "To Hell with Unity" (NYRB 3/25),

The willingness of most congressional Republicans to endorse Donald Trump's attempts to overturn the November election and their unwillingness to convict Trump for his role in the violent putsch of January 6 may be horrifying. But these choices are also clarifying. There can be no illusions of accord, or even of civilized dispute. There is only a minority that will do everything in its considerable power to thwart, to wreck, to undermine.

Most Congressional Republicans have lost their entitlement to respect. Given their lingering allegiance to Trump, it is hard to imagine them regaining it. They heard Trump say repeatedly that he would not accept losing the election. And they supported his rejection of democracy. Is there some cozy compromise to be found here?

There are some exceptions to the current filibuster rule, including executive and judicial branch nominations and a process called budget reconciliation. Reconciliation bills are restricted to three subjects: spending, revenues, and the federal debt limit. Senate Democrats have struggled to fit a desperately needed economic relief billthe $1.9 trillion Save America Actinto the reconciliation framework. Democrats accepted the Senate parliamentarian's ruling that raising the minimum wage to $15 should not be part of a reconciliation bill. They could have overruled her, but they knew that some conservative Democratic senators were opposed to a $15 hike, and they needed every last Democrat to vote for the bill against uniform GOP opposition.

But the next bill, the "For the People Act" (FTPA) recently passed by the House, is sweeping legislation that cannot be done through reconciliation and faces death by filibuster in the Senate. For an excellent and comprehensive summary of this bill, see the Brennan Center's Annotated Guide to the For the People Act of 2021. The FTPA wants to end gerrymandering and make it easier to register and vote. The GOP wants the opposite and has initiated an avalanche of state legislation to make it harder to vote, especially for communities of color. Having lost the popular vote in seven of the past eight Presidential elections, it is now trying to govern as a minority party, as Fintan O'Toole explains:

This possibility is built into the American system. The electoral college, the massive imbalance in representation in the Senate, the ability to gerrymander congressional districts, voter suppression, and the politicization of the Supreme Courtthese methods for imposing on the majority the will of the minority have always been available.

The FTPA is trying to achieve the fairest, most democratic electoral system within the confines of an anti-majoritarian 18th-century constitution. For instance, it promotes internet, same day and automatic voter registration, blocks arbitrary purges of voter lists, facilitates mail-in balloting, and requires equitable and convenient allocation of voting places.

If we and our legislators are serious about having a democracy, the FTPA must be enacted to prevent Republicans from achieving minority rule by voter suppression. And we cannot have this legislation as long as the filibuster is in place. The filibuster is itself a destructive instrument of minority rule.

As the great Republican Abraham Lincoln said in his Inaugural Address of 1861: "The rule of a minority, as a permanent arrangement, is wholly inadmissible; so that, rejecting the majority principle, anarchy or despotism in some form is all that is left." What would Lincoln think of his party now represented by a collection of small men and women prostrating themselves before an unhinged former President and would-be autocrat?

Related Topic(s): Anti-government; Democracy; Democracy Destroyed; Filibuster; Reconciliation; Senate, Add Tags
Add to My Group(s)
Go To Commenting
The views expressed herein are the sole responsibility of the author and do not necessarily reflect those of this website or its editors.