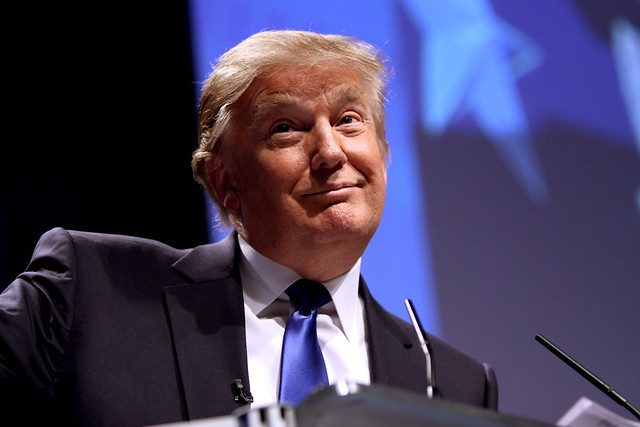 There's speculation he's never been serious about running, surprised he won the nomination, and is already preparing for a loss -- blaming a hostile media ("the lowest form of life") and "rigged" voting.

There are at least three ways to get the goods and services for a political campaign: (1) pay for them yourself, (2) solicit and spend others' campaign contributions, or (3) get what you need without paying.

Given the proportion of campaign advertising dollars spent on radio and TV (80%), getting it free is the preferred option.

So how has Donald Trump made out with free media? Like a bandit! Two billion dollars' worth by March this year.

Which brings us to a possible understanding of Trump.

One of his wildest and most recent assertions is that ISIS was created by President Barack Obama, its "founder."

Many, including myself, have noted that our entry into Iraq, exit, and then re-entry have increased recruitment of terrorists and attacks on American military. When Trump appeared on conservative talk radio host Hugh Hewitt's program, Hewitt tried to use this analysis to help Trump. Trump was having none of it:

Hugh Hewitt (HH): You said the President was the founder of ISIS. I know what you meant. You meant that he created the vacuum, he lost the peace.

Donald Trump (DT): No, I meant he's the founder of ISIS.

HH: But he's not sympathetic to them. He hates them. He's trying to kill them.

DT: I don't care. He was the founder.

HH: But by using the term "founder," they're hitting you on this again. Mistake?