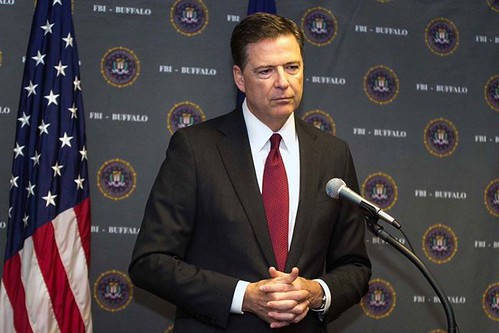 F.B.I. agents are all but certain that it [their review of newly-found Huma Abedin-Hillary Clinton emails] will not be completed by Election Day, and believe it will take at least several weeks."

FBI Director James B. Comey has created a bit of a mess.

The FBI's investigation of Hillary Clinton's treatment of classified emails as Secretary of State was wrapped up in July. Comey announced that while her procedures were "extremely careless," she had neither the requisite criminal intention, nor was there any other reason, to proceed with her prosecution.

One of Hillary's closest aides, Huma Abedin, was married to Congressman Anthony Weiner. Weiner, formerly infamous for sending women lewd pictures of himself, is now being investigated by the FBI for doing so with a 15 year old girl. As a product of that investigation, it appears that in addition to whatever else he may have had on his computer, there were some of Huma Abedin's emails -- possibly including email exchanges between her and Hillary Clinton.

Department of Justice practice is to not reveal details of ongoing criminal investigations, and not to make announcements that might affect the outcome of a political campaign within 60 days of Election Day. Comey, having made a commitment to members of Congress to keep them informed of developments regarding Clinton's classified emails, informed them -- 11 days before the presidential Election Day -- of the possibility there might be more emails as a result of the Weiner investigation. Apparently Weiner's computer, containing some 600,000 emails, had been sometimes shared with his wife.

At the time, Comey's FBI didn't even have a search warrant authorizing their access to Huma Abedin's emails. (Now they have one.) Apparently he had not even seen any of the relevant emails, let alone made a judgment about what problems they did, or did not, raise.

Given the role throughout the 2015-16 presidential campaign of what Senator Bernie Sanders once famously described as "Hillary's damned emails," it could have been predicted that Comey's rekindling this fire, raising suspicions without a soupçon of facts, would have the impact on the election's outcome that is already showing up. Talk about an "October surprise!"

What's worse, as the opening quote reports, the FBI is saying it's unlikely there will be any facts prior to Election Day.

So what's to be done? Don't insist, for now, that the excellent must be permitted to be the enemy of the good.