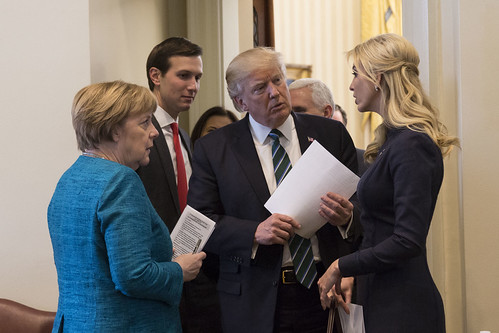 Whether you think President Trump has taken unfair advantage of National Security Adviser, General H.R. McMaster, and Secretary of Homeland Security, John Kelly, or you blame them from going along with his inappropriate demands, either way it's a tragedy.

Much has been written about Jared Kushner's collusion with Russian officials, while a private citizen, to make use of Russian networks to set up a secret back-channel for communication between the Trump Team and the Kremlin that would be unknown to, and incapable of surveillance by, U.S. security agencies. Ellen Nakashima, Adam Entous and Greg Miller, "Russian Ambassador Told Moscow that Kushner Wanted Secret Communications Channel with Kremlin," Washington Post, May 26, 2017;Maggie Haberman, Glenn Thrush and Julie Hirschfeld Davis, "Trump Returns to Crisis over Kushner as White House Tries to Contain It," New Yiork Times, May 28, 2017, p. A1; Abby Phillip and Max Ehrenfreund, "As White House Defends Jared Kushner, Experts Question His Back-Channel Move," Washington Post, May 29, 2017. And see, "Trump's 'Just Politics' Defense," May 28, 2017.

The reaction of former CIA and NSA Director, Michael Hayden, was typical of many experienced with such matters: "What manner of ignorance, chaos, hubris, suspicion, contempt, would you have to have to think that doing this with the Russian ambassador was a good or appropriate idea? . . . This is off the map. I know of no other experience like this in our history, certainly within my life experience." Adam Kelsey, Riley Beggin and John Santucci, "Kushner Asked Russian Ambassador for Back Channel on Syria and Other Policy Matters," ABC News, May 27, 2017.

It's understandable that the Trump Team would want to defend itself from this additional blow to the credibility of their insistence that there was no collusion with the Russians. In doing so they could draw upon a number of the Crisis Communications 101 arrows in their quiver. That's the way a White House under siege responds. We're used to that.

What I find tragic about the way they've gone about it is their dragging federal officials with otherwise strong reputations for integrity into the spotlight, and into guest slots on the Sunday TV shows, to be the Trump Team's spokesperson-defenders of the indefensible. These performances have not helped Trump all that much, but have done probably irredeemable harm to the reputations and effectiveness of those officials.

They have used talking points (presumably provided them) that, while not outright lies, are clearly designed to be duplicitous and misleading. When Trump provided code-name intelligence to the Russians, while visiting in the White House Oval Office, there were a number of things wrong with what he did. For one, the intelligence had come from another country with the understanding it would not be shared with others. For another, the nature of the revelation, including where it had been gathered, would make it easy for the Russians to figure out the "sources and methods" that had been used.

Trump's National Security Adviser, General H.R. McMaster, was called upon to handle that one, and said that the stories about what happened were false because Trump had not revealed "sources and methods." But the stories he was saying were false had not said that Trump did reveal sources and methods. The stories had dealt with all the other things wrong with what Trump had done. Nonetheless, McMaster's statements were designed to, and did, leave the impression that Trump did nothing wrong.

The same approach was more recently used with regard to Kushner's back-channel proposal to the Russians. This time both McMaster, and Secretary of Homeland Security, General John Kelly (on ABC's Sunday morning show), were sent out to say not only that what he did was "no big deal," but that back-channel communications are common and actually beneficial when dealing with our adversaries.

Once again, to say that back-channel communications are common and beneficial is true. But that statement is not even relevant, let alone a defense or justification for what Kushner did, and may well have been a violation of the Logan Act among other things.

Trump had earlier asked other officials to give statements to the media defending his actions. Those officials refused. This time they agreed.

There is much wrong with this approach.

For one, it is grossly unfair. It's kind of like asking your best friend to appear in court as a witness on your behalf and perjure themselves to save you from prison. It's not a decent way to treat members of your Administration. There is a better alternative when the President has done something wrong or questionable: that's what Press Secretary Sean Spicer is for.

Moreover, it weakens the ability of those officials to help the Administration by doing well the jobs they have been appointed to do. It means the public, legislators and judges, our allies and adversaries, and the media will be less likely to believe anything they say in the future. There's some question as to whether the sitting National Security Adviser should be going public with statements about anything. That is not a position for a "personality." It is a serious, largely secret responsibility.

And those are just some of "Kushner's Back-Channel Multiple Tragedies."