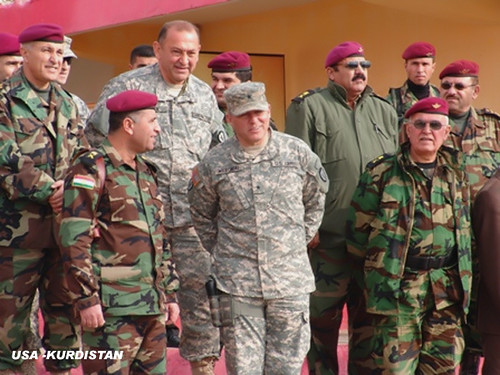 The news about US troops withdrawal from northern Syria in the beginning of October has shocked all the Kurds from the average citizen to the heads of administrations in Kurdish capital, the city of Qamishli.

The rapid worsening of situation in the region, the absence of any support and the start of Turkish "Peace Spring" military operation had mobilized the leadership of Syrian Kurds to find the solution of unexpected crisis. The US Presidents' claim that his military dispatched a mission in Syria clearly showed Washington's readiness to abandon the Kurds to their fate. The small groups of US servicemen who left in Syria just "secure the oil". The current situation had forced the Syrian Democratic Forces (SDF) to seek the support in the face of the Syrian Government.

However this move by the Kurds was strongly condemned by the USA. The president of executive committee of the Syrian Democratic Council (SDC) Ilham Ahmed during her visit to Washington was told that America prohibits SDF to cooperate with the government of the Syrian president Bashar-al-Assad and his Russian allies.

Ilham Ahmed said: " U.S. officials urged us to wait, and they always told us if you reach out to the regime, we will withdraw from the area".

The commanding general of the Kurdish-led Syrian Democratic Forces (SDF) Mazloum Abdi had also pleaded with Senior Advisor to the Special Representative for Syria Engagement William Roebuck, to allow the SDF to negotiate with Russia for protection as Turkish artillery pounded Syrian border towns ahead of the invasion earlier in October. The American official told the commander "not to take any immediate decisions".

According to US' actions, the Kurds are their target for compulsory isolation of Russia and Syrian Arab Army. While US troops will continue to secure the Syrian oil, the Kurds should fight the Turkish army and its proxies alone.

I'm a Lebanese Middle East researcher of Syrian origin. In 2012, my sister was severely injured after a mortar shell hit our house in Al-Rastan outskirts (Homs province, Syria). Our family had to flee for medical treatment to Lebanon. Since that (more...)
Related Topic(s): Syria; Syria; Syrian Arab Army; Syrian Kurds; Syrian Withdrawal; USA; USA Govt; Us-syria Invasion, Add Tags
Add to My Group(s)
Go To Commenting
The views expressed herein are the sole responsibility of the author and do not necessarily reflect those of this website or its editors.

U.S. Forbid Kurds To Cooperate With Other States

US serviceman: I Regret We Allow Kurdish Genocide

Turkey Does Not Object Cooperation With ISIS... If It Helps Kill Kurds