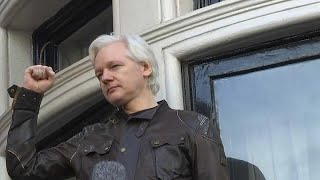 3. Anyone who offends the US-centralized empire will find themselves subject to a trial by media, and the media are owned by the same plutocratic class which owns the empire. To believe what mass media news outlets tell you about those who stand up to imperial power is to ignore reality.

4. Corrupt and unaccountable power uses its political and media influence to smear Assange because, as far as the interests of corrupt and unaccountable power are concerned, killing his reputation is as good as killing him. If everyone can be paced into viewing him with hatred and revulsion, they'll be far less likely to take WikiLeaks publications seriously, and they'll be far more likely to consent to Assange's silencing and imprisonment. Someone can be speaking 100 percent truth to you, but if you're suspicious of him you won't believe anything he's saying. If they can manufacture that suspicion with total or near-total credence, then as far as our rulers are concerned it's as good as putting a bullet in his head.

5. The fact that the mass media can keep saying day after day "Hey, you know that bloke at the embassy who shares embarrassing truths about very powerful people? He's a stinky Nazi rapist Russian spy who mistreats his cat" without raising suspicion shows you how propagandized the public already is. A normal worldview unmolested by corrupt narrative control would immediately that see someone who circulates inconvenient facts about the powerful being called pretty much all the worst things in the world is clearly being lied about by those in power.

6. Relentless smear campaigns against Assange have given the unelected power establishment the ability to publicly make an example of a journalist who published uncomfortable truths without provoking the wrath of the masses. It's a town square flogging that the crowd has been manipulated into cheering for. Narrative control has enabled them to have their cake and eat it too: they get to act like medieval lords and inflict draconian punishment against a speaker of undeniable facts and leave his head on a spike in the town square as a warning to other would-be truth tellers, and have the public believe that such a bizarre violation of modern human rights is perfectly fine and acceptable.

7. There are people who worked really hard to get journalism degrees, toiled long hours to earn the esteemed privilege of appearing on the front pages of a major publication, only to find themselves writing articles with headlines like "Julian Assange is a stinky, stinky stink man."

8. Ordinary citizens often find themselves eager to believe the smear campaigns against Assange because it is easier than believing that their government would participate in the deliberate silencing and imprisoning of a journalist for publishing facts.

9. And yes, Julian Assange is most certainly a journalist. Publishing important information about what's going on in the world so the public can inform themselves is precisely the thing that journalism is. There is no conventional definition of journalism which differs from this. Anyone who says Assange is not a journalist is telling a lie that they may or may not actually believe in order to justify his persecution and their support for it.

10. Another reason people can find themselves eager to believe smears about Assange is that the raw facts revealed by WikiLeaks publications punch giant holes in the stories about the kind of world, nation and society that most people have been taught to believe they live in since school age. These kinds of beliefs are interwoven with people's entire egoic structures, with their sense of self and who they are as a person, so narratives which threaten to tear them apart can feel the same as a personal attack. This is why you'll hear ordinary citizens talking about Assange as though he attacked them personally; all he did was publish facts about the powerful, but since those facts conflict with tightly held identity constructs, the cognitive dissonance that was caused to them can be interpreted as feeling like he'd slapped them in the face.

11. We live in a reality where unfathomably powerful world-dominating government agencies are scrutinized and criticized far far less than a guy trapped in an embassy who published inconvenient facts about those agencies.

12. Assange disrupts establishment narratives even in his persecution. Liberal establishment loyalists in America still haven't found a rational answer to criticisms that in supporting Assange's criminal prosecution they are supporting a Trump administration agenda. You now have the same people who've been screaming that Trump is Hitler and that he's attacking the free press cheering for the possibility of that same administration imprisoning a journalist for publishing facts.

13. The precedent that would be set by the US prosecuting a foreign journalist for merely publishing factual information would constitute a greater leap in the direction of Orwellian dystopia than the Patriot Act, for America and for the entire world.

14. The billionaire media has invalidated itself with its refusal to defend Assange. They know the precedent set by his prosecution for WikiLeaks publications would kill the ability of the press to hold power to account, but they don't care because they know they never do that. For all their crying about Jamal Khashoggi and Jim Acosta's hurt feelings, they do not actually care about journalism or "the free press" in any meaningful way.

Related Topic(s): Julian Assange; Media; Orwellian; Persecution; Truth; Wikileaks, Add Tags
Add to My Group(s)
Go To Commenting
The views expressed herein are the sole responsibility of the author and do not necessarily reflect those of this website or its editors.