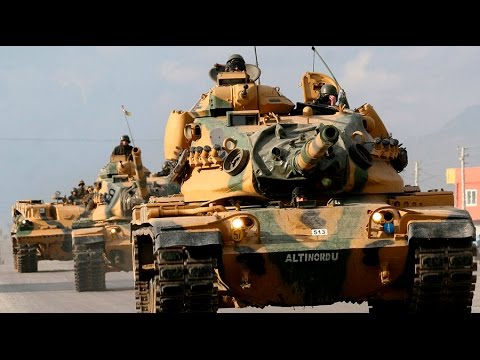 Turkey is pressing for the US and its allies to launch a ground invasion as the only means of ending the nearly five-year-old civil war in Syria, an official in Ankara told the media Wednesday. "We are asking coalition partners that there should be a ground operation," said the official, who was authorized to speak on the condition of anonymity. "We are discussing this with allies."

While adding that such an invasion would not take the form of a "unilateral military operation from Turkey in Syria," the official insisted, "Without a ground operation, it is impossible to stop the fighting in Syria."

The potential support for such an escalation of the Syrian war has found expression in a concerted propaganda campaign, particularly in Europe, over the deaths of some 50 civilians in attacks on hospitals and schools in northern Syria on Monday. The Western media and several European governments have blamed the deaths on the Syrian government and the Russian forces supporting it, charges that both Damascus and Moscow have denied.

Earlier this month, both Saudi Arabia and the United Arab Emirates, which, like Turkey, are key patrons of the Islamist militias in Syria, announced that they were prepared to send troops into the country. The Saudi royal regime transferred four of its warplanes to Turkey's Incirlik air base.

Asked what the goal of such a ground operation would be, the Turkish official replied, to remove "all terror groups from Syria," adding that Turkey included in this category not only the Islamic State of Iraq and Syria (ISIS), but also Syrian Kurdish forces and the Syrian government itself.

While insisting on the need for the "international coalition" to participate in any invasion, the Turkish official left open the possibility of unilateral action if this failed to materialize. "Of course, it is difficult to reckon what could happen in 10 days," he said. "If conditions change, there might be some options."

These statements came as Turkey continued its bombardment of northern Syria with long-range artillery for a fourth consecutive day. The target of the Turkish fire is the YPG, or People's Protection Units, the Syrian Kurdish militia.

Backed by Russian air strikes, the YPG has made major military advances near the Turkish border against Al Qaeda-linked Islamist forces supported by Ankara and the West. Meanwhile, troops loyal to the Syrian government of President Bashar al-Assad have scored similar victories around Aleppo, which was Syria's largest city and commercial center before the US-orchestrated war for regime-change. This war has claimed the lives of over a quarter of a million Syrians and turned 11 million more into homeless refugees.

During a visit to Ukraine -- undoubtedly staged in a deliberate bid to ratchet up tensions with Russia -- Turkish Prime Minister Ahmet Davutoglu said Tuesday that Turkey would continue its bombardment of Turkish territory until the YPG withdrew from the strategic border town of Azaz.

The Turkish shelling and demands for an outright invasion of Syria reflect the growing desperation of the imperialist powers and their regional allies over the reversals suffered in their attempt to overthrow the Assad government by arming and funding Salafist jihadi forces in a sectarian civil war.

The government of Turkish President Recep Tayyip Erdogan has declared its support for the so-called war against ISIS initiated by the US with bombing campaigns in both Iraq and Syria. Ankara has used this campaign, however, as a cover for launching its own military assault against Kurdish forces in both of those countries, together with a bloody crackdown against the population in Turkey's predominantly Kurdish provinces. It has drawn an equal sign between ISIS, the PKK (Kurdistan Workers' Party) and the Syrian Kurdish Democratic Union Party (PYD) and its military arm, the YPG, branding them all as "terrorist."

At the same time, both the Erdogan government and the Saudi monarchy are determined to prevent the advances by the YPG and Syrian government forces from cutting off the last supply routes that have been used to funnel massive quantities of arms and supplies to the Islamist militias in an operation coordinated by the CIA.

Any Turkish-Saudi intervention would be directed at crushing the Kurds and supporting the Islamists. Both these aims would quickly pose the direct threat of a military confrontation with the Syrian government and the Russian forces that are supporting it.

Given Turkey's premeditated ambush of a Russian warplane on the Turkish-Syrian border last November, it is certain that any attempt to send Turkish planes into action over Syria would provoke a swift response. Russia has deployed advanced S-400 anti-aircraft weapons systems in Syria for just such a purpose.

Bill Van Auken (born 1950) is a politician and activist for the Socialist Equality Party and was a presidential candidate in the U.S. election of 2004, announcing his candidacy on January 27, 2004. His running mate was Jim Lawrence. He came in 15th (more...)
Related Topic(s): Bashar Al-assad; Invasion; Media; Medvedev; Propaganda; Syria, Add Tags
Add to My Group(s)
Go To Commenting
The views expressed herein are the sole responsibility of the author and do not necessarily reflect those of this website or its editors.

Obama, Congress Back Legalization of a Police State

US Secret Armies Gear Up for Global War

After Announcing "normalization" with Cuba, Obama Slaps Sanctions on Venezuela