I have previously described "Trumpite Functional Fascism " as a modern, 21st form of the regime-type. It is based in its 20thcentury archetypes, but it has several important characteristics that are different. The Elements of Republican/Trumpite 21stcentury Functional Fascism in the United States, either already achieved or set forth as goals to be achieved are:

1. The use of the law to promote racism, Islamophobia, xenophobia, and misogyny.

2. The criminalization of certain religious/non-religious beliefs, as in, for example, LGBT rights and the freedom of choice in the outcome of pregnancy. This is facilitated by the use of "God's Word" to justify oppression, hatred, and, ultimately, Dominionism. Indeed, for the United States, Dominionism is the hand-maiden of fascism, as were Catholicism in Spain and Italy and Shintoism in Japan.

3. The repression, then criminalization, of dissent.

4. The tolerance for, and in certain quarters the promotion of, the Dogma of White Supremacy.

5. The gradual suppression of the free vote, especially among minorities, the young, and the poor, by the use of gerrymandering, voter-suppression, and vote-hacking.

6. The assault on, and the distortion of, the use of data, of all kinds, as in "L'Affaire Cambridge Analytica and Facebook ."

8. The solidification of the control of the State apparatus by the nation's Executive. 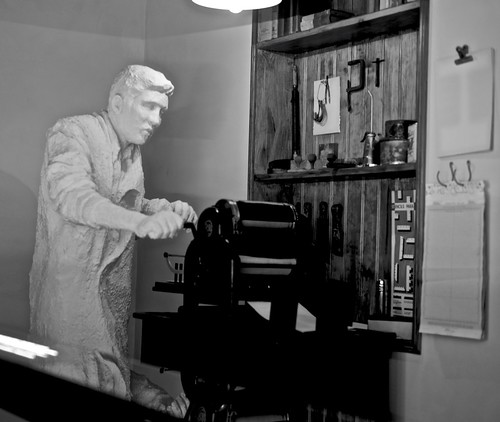 Instruments used during the clandestine fight against the fascism. If we don't stop it in time, we are going to need these.
(Image by pedrosimoes7)   Details   DMCA

This Doctrine of Functional Fascism finds a very happy home in the modern the Republican Party. It is of course the outcome to date of the Republican Rightward Imperative which has controlled the direction of the Party since the time of Goldwater.

So far, Trumpite Functional Fascism has differed from classic 20 the century fascism in several important respects. For one thing, at the beginning of the fascist (Nazi) takeover in Germany, different political views were openly expressed within the upper levels of the Party. For example, Gregor Strasser believed that the word "socialist" in the name of the Party, National Socialist German Workers Party, really had some meaning. So did Ernst Roehm, the commander of the Party's original private army, the Sturmabteilung, the S.A. It happens that they and others like them left the Party's leadership fairly suddenly, beginning with the "Night of the Long Knives," June 30, 1934, an event carried out primarily by Hitler's own private army, the Storm Troopers (SS), and in which Hitler actually personally participated. Indeed, they were killed. But until that time, different views were tolerated with the Hitler Administration.

But then, following that consolidation of power, right through until the Nazi defeat in 1945, Hitler surrounded himself either with yes-men, like Hermann Goering, Commander of the Luftwaffe, men who were smart enough to know that mistakes were being made along the way but were also wanted to keep their heads and thus were smart enough to keep their views entirely to themselves, like the smartest man the Nazi government, the Propaganda Minster, Josef Goebbels, or men who were most enthusiastic avatars of the whole of Hitlerite/Nazi doctrine, like Heinrich Himmler, Commander of the SS and Reinhard Heydrich, who, until his assassination by Czech partisans in 1942, was one of Himmler's most vicious deputies .

Likewise, until the past several weeks, somewhat differing views were to find expression within the Trump Administration. Sec. of State Rex Tillerson opposed both military action against the Democratic People's Republic of Korea (the DPRK) and the abrogation of the "Iran Deal." (He also apparently regarded the President as a "moron.") The second National Security Advisor, Gen. H.R. McMaster, thought that Russia had done real damage to the U.S. electoral process in 2016, apparently regarded the President as an "idiot", and apparently, with several of the top leaders of the U.S. intelligence agencies (including the Director of National Intelligence, Dan Coates, formerly a right-wing Congressman from Indiana) wanted to do much more to deal with future Russian threats to the U.S. electoral system that Trump would authorize.) As is well-known, the current White House Chief of Staff, John Kelly, is supposedly the "adult in the room" (although he does share certain fascistic tendencies with Trump , like disdain for the legislative process and in-built racism). But he does try to control the President's schedule and reign in some of his more outlandish commentary. However, he is apparently on his way out. And there are others as well.

However, now the President is being surrounded more and more by officials who replicate his views exactly. The new Secretary of State nominee is Mike Pompeo, is a Tea Party Republican who wants, among other things, to rip up the "Iran agreement." The new CIA-Director nominee is a woman who ran part of the Cheney/Bush torture program. Trump enthusiastically endorsed the use of torture during the campaign. Steve Mnuchin, the Hollywood film producer installed as Secretary of the Treasury is totally-Trump, on matters from the economy-destroying tariffs to the use of the line-time veto, something that just happens to have been declared unconstitutional by the Supreme Court. But Trump likes the idea, so Mnuchin, wanting to keep his job, spouts it (and given his limited background in economics, may believe it too). And then there is Kellyanne Conway, likely the next White House Communications Director. She of course does better as Trump's "yes-woman" than Trump could do himself. So as unilaterality (my spell-checker did not highlight this word, so I guess it's OK) took over the Hitler Regime after June 30, 1934, so is it gradually taking over the Trump Regime now, without anyone getting killed (yet).

You keep sayin' that Bolton has a mustache like mine and I'm gonna get you!
(Image by kerryinlondon)   Details   DMCA

And then, in case you are wondering why I have not yet mentioned John Bolton, we come to that major feature of 20th-century fascism in the three major countries in which it came to take over their political/economy: Germany, Italy and Japan. That is, engaging in foreign wars. Although Trump has talked about doing this --- see "Fire and Fury" in relation to the DPRK--- so far it has been just talk. His top national security people, McMaster, Tillerson, and Sec. Def. James Mattis, have shown no enthusiasm for it at all. But now Tillerson is gone, McMaster is gone, Mattis may be on his way out, and in comes John Bolton as National Security Advisor (he of the "walrus mustache," and I think that to describe it in those terms in actually an insult to walruses). Bolton of course, has never met a modern war he didn't like, has been an advocate for several of them currently, against Iran and the DPRK respectively. An irony of the Bolton nomination is that in any kind of a normal White House, given his foreign/money attachments, he might very well not be able to gain security clearance . But Trump, who almost certainly could not get security clearance himself because of his own foreign-business ties, especially with the Russians, can overrule staff on this matter, and will probably just go ahead and give it to Bolton.

And so, to the many fascistic characteristics that can be attributed to the Trump-Pence Regime, as listed at the beginning of this column, can now be added having a government of yes-men (and, in the 21st century, yes-women), and a (very possible) involvement in foreign war(s).

Steven Jonas, MD, MPH, MS is a Professor Emeritus of Preventive Medicine at StonyBrookMedicine (NY) and author/co-author/editor/co-editor of over 35 books. In addition to his position on OpEdNews as a "Trusted Author," he is a Senior Editor, (more...)
Related Topic(s): Dominionism; Dprk; Fascism; Gerrymandering; Hitler; Iran; Islamophobia; Misogyny; President; Racism; (more...) Republican; Torture; Unconstitutional; Wars; Xenophobia, Add Tags  (less...)
Add to My Group(s)
Go To Commenting
The views expressed herein are the sole responsibility of the author and do not necessarily reflect those of this website or its editors.