The House of Representatives recently passed a bill that limits legal abortion availability to 20 weeks of fetal gestation. Whether it can pass the Senate is a matter up in the air, but of ocurse as everyone on both sides of the abortion-rights knows, this Act is a direct assault on the Roe v. Wade Supreme Court decision of 1973.

The essence of Roe v. Wade was that, until the generally accepted time of fetal viability outside the womb, 24 weeks, women were to have freedom of choice in the outcome of pregnancy. The anti-abortion-rights movement lay fairly low during the 1970s. It began ramping up with the advent of the Reagan Administration. In the 1980 campaign, Candidate Reagan and the leadership of the Republican Party decided to use the issue to as one means of bringing the then-developing Political Religious Right further into the Party. Indeed, one the prices that Reagan demanded of George H.W. Bush in return for the Vice-Presidential nomination was that he and his wife Barbara leave their long-held seats of the Board of Texas Planned Parenthood. 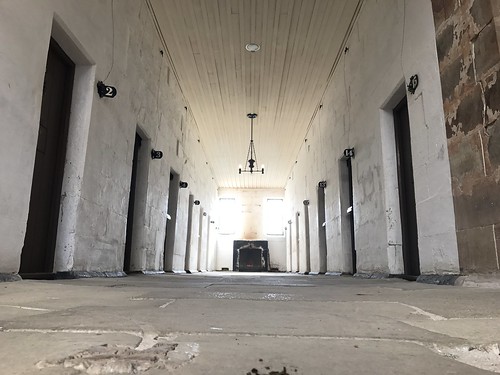 Prison, for abortion seekers, or abortion providers, or both?
(Image by Dushan and Miae)   Details   DMCA

The pro-choice forces have been gradually losing the battle ever since. There are a variety of reasons for this state of affairs. One is in the realm of terminology. The pro-choice movement has stuck with that phrase rather than focusing on rights, as in "abortion rights," which in fact was at the center of Roe v. Wade, which was decided on a "right to privacy" interpretation of the 14th Amendment. Then, at least certain elements of the abortion rights movement allowed the anti-choicers to get away with the use of the term "pro-life," sometimes themselves even calling the anti-choicers "pro-life." Which gets to the essence of the problem and why the abortion rights movement is on its way to losing the battle on the national level. Indeed, as is well-known, in many states where the anti-abortion-rights movement is politically powerful, and through a variety of legislative acts has vastly limited the availability of legal abortion, functionally the abortion-rights forces have already lost.

This is at least in part because, with a few exceptions here and there, the abortion-rights forces have stayed with the "right-to-choose" argument (with which I fully agree), without using any others. And there is a big one out there, waiting to be mobilized. But for one reason or another (and I would very much like to hear what they are) the abortion rights movement, at least its leading organizations like the National Abortion Rights Action League, refuse to go there. And that is the issue of religious authoritarianism.

The position of the anti-abortion-rights forces is based exclusively on the religious concept of "when life begins." And it is a religious concept. In fact, to support it, the anti-abortion-rights movement most often cites the "inerrant word of God" as found in the Bible. That the version most often cited by the anti-choicers is the King James version, an English translation created in the early 17th century by a 52-member committee of scholars and theologians, is a point often missed by the "inerrantists" (and their critics as well). If the King James version were to be regarded as "inerrant," one would have to assume that "God" spoke through every one of them. And, of course, what does that say about all of the other versions, appearing in numerous translations from the original Aramaic, Hebrew, Greek and Latin? It should also be noted that the man who made the first English translation of the Bible, one William Tyndale, in 1536 was burned at the stake, in England, for having the temerity to do so. What the Republican Religious Right wants to do is right out of the 16th century: put the power of the State and the criminal law behind one particular set of religious doctrines.

What we have here is the refusal of the pro-choice/abortion-rights side to address this fundamental question: are religious fundamentalists going to be allowed to set social policy on one of the oh-so-many matters of personal being and belief, based solely on the religious dogmas that they personally adhere to. They so desperately want their religious beliefs to set social policy that they advocate the employment of the criminal law to do so. Not only that, but the anti-abortion-rights doctrine, religion-based as it is, ignores the fact that many women who seek abortions, and their male partners, are themselves religious. They simply have a different set of religious beliefs than do the Fundamentalists and the Dominionists (like the current Vice-President of the United States).:

Since the time of Reagan, the Republican Party has hacked away at abortion rights, primarily at the state level, using that hacking, of course, for entirely political purposes, to bring to is side the anti-abortion-rights Religious Right. For decades they have been led into battle by describing themselves as "Pro-life," which, when referring to fetuses is an entirely religious concept. And the pro-choice movement has stayed primarily with the original, feminist, argument that the woman's body is hers to control and that the choice of whether or not to have an abortion, within the accepted limits of Roe v. Wade (which prescriptions abortion-rights opponents have never themselves accepted), is based on the woman's rights to choose. But this very limited strategy has failed over time.

Now, let me make it clear that I am firmly in favor of the "woman's right to choose" and the "woman's right to control her own body" arguments. But they are not politically-winning ones, and politically-winning ones is what our side desperately needs. What I am saying here that it is time (if it is not already too late) to vastly broaden the defense, in fact to go on the attack against the anti-choicers. This can be done using four words: "Republican Party; Religious Authoritarianism."

This where the pro-choice movement must go, if in more-and-more states, abortion will become a practical impossibility, especially in the second trimester in which, given the language of Roe, states can choose to interfere. But, if your interpretation of the Bible is that the fetus is "alive" in the post-birth sense, then you shouldn't have an abortion. But neither should you be allowed, in a nation governed by civil law (as the United States supposedly is, but as the forces of organized religion gain strength after strength on issue after issue, like allowable discrimination in the marketplace for good and services, one has to wonder), you force your view down my throat through the use of the criminal law.

Whether the penalties, were abortion to be formally criminalized, would fall on the person preforming the abortion or on the woman receiving it, or both, is irrelevant. The anti-abortion-rights forces are engaging in Religious Authoritarianism. They are using their religious beliefs as the foundation for their campaign to change the law governing everyone. Interestingly enough, the modern position of the Roman Catholic Church on abortion was only established, by Pope Pius IX, in 1869. He reversed the long-time Church position, established from the time of St. Augustine and reinforced by St. Thomas Aquinas, that abortion was OK up to the time of "quickening" (16-20 weeks). Also, it was Pius IX who established the Doctrine of Papal Infallibility.

But this is what the pro-choice forces must begin to hammer away on if the battle is not to be irretrievably lost. It is a matter of religious liberty, but not the "religious liberty" of the discriminators (a brand-new Republican argument). It is the religious liberty of everyone, including that of the abortion-seekers (and to be sure there are many) who are themselves quite religious (the same principle applies to contraceptive-users), that is at stake here. Of course, once that principle is recognized, then the battle -- over whether religious authoritarianism is to become the basis of the law of the land --- and then who knows what's next on the agenda of the Religious Right -- a religious test for political office seekers, which violates Article VI of the Constitution already seems to be there.

The matter of what religious liberty really is in our nation is one that concerns everyone, male and female. And then the fight has to be taken to THE REPUBLICAN PARTY, especially as Dominionists such as Vice-President Pence and Senators Cruz and Rubio, are coming to the fore. By putting religious authoritarianism at the center of its political doctrine, it has become the enemy of freedom across the board in this country. This is where the abortion-rights movement has to go, if it is to have any hope of reversing its losses and eventually winning the battle. Of course, this is where the progressive political forces have to go as well. But that is another story.

This column is based in part on one I published about a year and a half ago on The Greanville Post: "Winning the Abortion Wars: Four Words Need to Introduced into the Battle: 'Religious Authoritarianism' and 'Republican Party' " http://www.greanvillepost.com/2016/04/09/winning-the-abortion-wars-four-words-need-to-introduced-into-the-battle-religious-authoritarianism-and-republican-party/ . Items published on The Greanville Post are not subject to copyright.

Steven Jonas, MD, MPH, MS is a Professor Emeritus of Preventive Medicine at StonyBrookMedicine (NY) and author/co-author/editor/co-editor of over 35 books. In addition to his position on OpEdNews as a "Trusted Author," he is a Senior Editor, (more...)
Related Topic(s): Abortion; Abortion Laws; Abortion Rights; Authoritarianism; Choice; Fundamentalists; God; Liberty; Privacy; Pro-choice; (more...) Republican; Rights, Add Tags  (less...)
Add to My Group(s)
Go To Commenting
The views expressed herein are the sole responsibility of the author and do not necessarily reflect those of this website or its editors.