Late Sunday night, President Trump abruptly announced over Twitter that he plans to withdraw U.S. forces from Northern Syria; saying that from now on, Turkey, Europe, Syria, Iran, Iraq, Russia, and the Kurds will now have to figure out the situation. The announcement took practically everyone by surprise and also angered many Republicans. For example, Senator Marco Rubio called it a grave mistake. Senator Mitt Romney, referring to the Kurds who supported the U.S. fight in Syria, called it a betrayal. Senator Susan Collins called it terribly unwise. And Senator Mitch McConnell said the move would only benefit Russia, Iran, and the Assad regime. Turkey's President Recep Tayyip Erdogan told Trump in a call on Sunday night that Turkey would finally move against Syrian Kurds as he had long threatened to do. Trump responded to the threat as follows:

DONALD TRUMP: I told President Recep Tayyip Erdogan, "You got to" It's going to be your responsibility now." Really, who's responsible? It's really Russia, it's Turkey, it's Iran, it's Iraq, and it's Syria, and anybody else in the neighborhood. We did a great service to the world. Right now we're at a position where if Turkey does anything out of what they should be doing, we will hit them so hard on the economy. Let them take care of it. We're policing. We're not fighting, we're policing. We're not a police force.

GREG WILPERT: Joining me now to discuss the situation in Northern Syria and of the Kurds that lived there is Edmund Ghareeb. He's a historian and expert on the Kurds, Iraq, and the Middle East. He has written or co-written books on the Kurdish nationalist movement. Thanks for joining us today Edmund.

EDMUND GHAREEB: Thank you. It's a pleasure.

GREG WILPERT: So as I mentioned in the introduction, President Trump quite explicitly threatened Erdogan with destroying Turkey's economy should Erdogan do anything that Trump considers to be off limits. Now, this is actually the words that he used in the tweet actually, and he only mentions the captured in the tweet; he mentions the captured ISIS fighters and their families as being possibly one of these things that are off limits. Now, do you think that this threat for the U.S. to act against Turkey will hold Erdogan back from invading or somehow intervening in Northern Syria to attack the Kurds, which clearly Turkey believes to be a threat to Turkey? 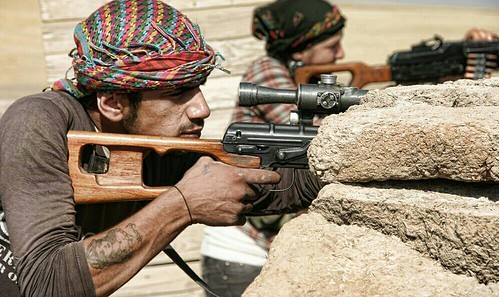 EDMUND GHAREEB: There's no doubt that the U.S. and Turkey have been in negotiations for months now, if not for longer, to try to agree on what kind of policy they are going to pursue and a tolerance in Northern Syria towards the Syrian Democratic Forces, which are led by the PKK which are primarily Kurdish forces. The U.S. and Turkey finally agreed that there should be a safe zone on the border. The question, however, was that there were differences over the size of that security zone. The U.S. and the Kurds agreed to something between 5 and 7 kilometers in depth and maybe 150 kilometers to 200 kilometers. Turkey, however, wanted 30 to 35 kilometers deep and about 400 kilometers; basically all the way to the Turkish-Iraqi border. Since the meeting between President Trump and President Erdogan at the United Nations, there seems to be something going on between the two sides, some kind of agreement.

I think the U.S. has tried up until last week when the Secretary of Defense and the new Chairman of the Joint Chiefs of Staff went to Turkey, but apparently the disagreements were still there until Saturday night when there was a conversation between President Trump and President Erdogan; and that's when the decision was made. It seems that both sides agreed on an area to be where Turkey could move into in Northern Syria. This in fact was a surprise to many. Although in reality it should not have been a surprise, partly because of the talks that were being held; partly because about five days ago there was an American official who spoke to the media without allowing his name to be used, saying a big storm is brewing in that part of that area and that the United States may not have sufficient forces and that we may be forced to withdraw. So basically that should not have been a surprise.

Also, if you look at the situation and our historical perspective, the Kurds who have relied on superpowers have often been betrayed once they fulfilled the jobs that they were expected to do. This happened in Iraq in the early 1970s when the U.S. provided assistance to the Kurds. The CIA was involved, Israel was involved, Iran was involved; but when the Shah of Iran and Saddam Hussein met in Algiers and reached an agreement to solve their problems, the United States dropped the Kurds and Kissinger said that the United States is not in the business of missionary work. Basically what they are saying: "We are not in the charity business." So they were dropped.

Before that, the U.S. and Britain also supported the Shah of Iran to defeat the only Kurdish Republic ever established in historyand this was the Kurdish Republic of Mahabad in 1946-47, which at the time was supported by the Soviet Union while Britain and the U.S. supported the Shawand brought down that republic. Its leader was executed with many top leaders and there was suppression of the Kurds at that time. There were numerous other incidents where not only the U.S. but Britain, the other European countries, and sometimes regional players betrayed the Kurds. The question is why didn't the Kurds learn a lesson from all these betrayals?

GREG WILPERT: Well, that actually brings me to the question. You would basically characterize this move by Trump to withdraw as another betrayal. If that's the case, does that mean that the U.S. troops should remain in Syria?

EDMUND GHAREEB: Regardless of what we may agree or disagree with them or think of it, Trump has been saying since he was a candidate he wants to withdraw from Syria, he wanted to withdraw from what he called these "unending wars"the last time I think he used the word "stupid wars"where the U.S. has paid a heavy price and it was the U.S. that has carried the burden. However, he has been unable to fulfill that promise primarilyat least in Syria or in Afghanistanand he has criticized President Obama's withdrawal from Iraq. It's very unclear how sometimes the President is operating and what he's thinking. He has more than once said that he wants to withdraw and let the people in the region basically carry the burden because the United States cannot be the world's policeman.

However, here I think there have been promises made to the Kurdsif not by the President, certainly by other officialsthat if asked they will back them. At the same time, the U.S. however also wanted to maintain its relationship with Turkey, which has been an important ally. I think this may have been also a factor that when it comes down to basically deciding on who is the best ally wherever the U.S. should go. There have been a number of statements from former senior U.S. diplomats, from some current officials that in the end, that Turkey is far more important than the Kurds. So in a way this should not, as I mentioned earlier, have come as a surprise.

I asked you the question, and I think that's the real question: Should the U.S. stay in Syria? What is the U.S. doing in Syria? What are the purposes? It does not seem that there is current U.S. policy towards Syria. And on top of that, the U.S. is not in Syria with the backing of the United Nations Security Council; the U.S. does not have a Congressional resolution authorizing the presence of U.S. forces in Syria. And also the Syrian government, which is still the internationally recognized government, has not asked for United States to be present in Syria. So basically the Syrians have been saying that the U.S.like Turkey, like other actors who are non-Syrian appliersare occupation forces and should leave. So to return to the issue, what does the U.S. want from Syria? Many of course believed that the U.S. wanted to blockade, prevent Iran from expanding its influence all the way through Iraq, through Syria to Lebanon where it supports Hezbollah, and maybe even all the way to Gaza.

Related Topic(s): Endless War; Syria; Trump, Add Tags
Add to My Group(s)
Go To Commenting
The views expressed herein are the sole responsibility of the author and do not necessarily reflect those of this website or its editors.