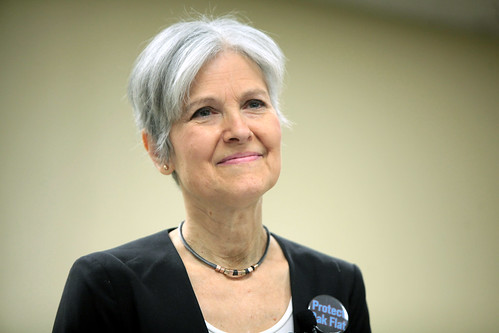 The Green Party presidential candidate says she will comply with the Senate investigation of her campaign, but warns that "a noose is tightening around our democratic institutions"

As a third party presidential candidate in a two-party system, Dr. Jill Stein was marginalized during the 2016 election. But, over a year later, the ever growing Russiagate controversy has pushed her into the spotlight. The Senate Intelligence Committee is now investigating Stein for, yes, possible "collusion with the Russians." Stein's campaign says it will comply with the Senate request for all relevant documents. Stein is likely being scrutinized for attending the 2015 RT Gala in Moscow, where she sat at the same table as Russian President Vladimir Putin, and former Trump National Security Advisor Michael Flynn. Despite numerous interviews explaining the nature of her trip to Russia, Stein has remained the target of a smear campaign, and this Senate move only adds fuel to that fire.

Dr. Jill Stein joins me now, physician, activist, and the Green Party's presidential nominee in 2016. Dr. Stein, let's start with the Senate request. What have they asked you for?

JILL STEIN: They've basically asked us for all relevant documents, and in truth, we have been very transparent throughout, from the get-go, when we first contemplated going to Russia as a part of the 10-year anniversary conference being held by RT. I was asked to participate in a panel addressing foreign relations, a subject that was at the top of our agenda during the presidential election, and we really welcomed the opportunity to lift up those ideas, calling, essentially, for a peace offensive in Syria and in the Middle East, looking really to do a 180 in our warmongering, not only with Russia but in the Middle East, and to put our foreign policy on a footing of international law, human rights, and diplomacy.

So, we welcomed the opportunity to go. We had to raise money to get there, because we were not going to accept money from a foreign government and violate campaign finance laws and ethics and so on, and create a conflict of interest, so we were raising money to get there from before the time that we went. We thanked our donors afterwards. We put out press releases about exactly who we were meeting with, and what the subject of discussion was. That was it.

Essentially, they're going to see a lot of administrative email arranging logistics, and in particular our [inaudible] on RT as an independent political candidate excluded from corporate media, to whom we represent a threat, and I think that's part of what it boils down to that [inaudible] political party, in an election, where 76% of Americans were clamoring for other voices and other choices, wanted open debates, held the two establishment candidates in greater [inaudible] than in any election in modern history. People were hungry for what we were offering, and they continue to be. I think this is another effort to [inaudible] the competition to the two establishment political parties who are running the show.

AARON MATÉ: All this is stuff you've explained before in public interviews, especially as you face questions about that infamous trip to the RT Gala in 2015, but yet, this continues, and I was struck at looking at the reaction yesterday to this news of your being summoned before the Senate Intelligence Committee. One staffer, who worked on the Hillary Clinton campaign in 2016, put out tweets saying, "Jill Stein is a Russian agent," over and over. Many people celebrated this as if this was going to prove something, as if this was a cause to celebrate. What do you think accounts for the reaction that has greeted this news, and just the overall hostility you've gotten over the past year, and the suggestion that you've been in league with the Kremlin?

JILL STEIN: Yeah. Well, I think both parties are nervous about the political revolt that's taking place, and it's well known that many Bernie Sanders supporters then became Trump supporters, thinking that this was how we protest this political status quo that's been throwing everyday people under the bus. Look at the last several weeks where the Democrats have really been focused on Russiagate rather than on this outrageous tax plan, which has all of a 30%, approximately, support, or the attack on the FCC.

The Democrats are essentially missing in action. They're very busy trying to Trumpify their programs, and are essentially waiting for an election to be able to run against Donald Trump in the mid-terms. It doesn't serve them well, it doesn't serve the American public, and I think in this case, we see a committee, which is being led by a Republican, looking for something that the Democrats and Republicans can agree on, because their time is coming due now, and they have to write a report, and come up with something, and they haven't exactly come up with something solid, not with a smoking gun.

I think the American public is widely confused. It's very hard to see the forest through the trees here. I do want to go on record that there is a valid and important dimension to addressing the question of interference in our elections. That is why my campaign launched a recount immediately after the election, to look into this question by essentially examining the voting machines. Unbeknownst to most Americans, those voting machines are still off limits. They have never been examined. Voting machines have never been examined for forensic evidence to confirm or to disprove, for once and for all, the question of interference, actually, in the hardware and the software of our elections, which is an important aspect. Our point is that it's not only foreign interference, it's interference by domestic agents, partisans, lone wolves, gangsters, and so on, and corporations, private corporations who own and run the software, that interference is not okay in our elections across the board.

We are now in a position of having to prove our innocence. We are presumed guilty, largely because of the Democratic party opposition research, which was essentially what the Trump dossier was all about. This was Democratic DNC-sponsored, secretly, and sort of using laundered money to avoid reporting in campaign finance laws, but this was essentially Democratic party opposition research, which declared, without a shred of evidence, that our campaign was being sponsored by the Kremlin, an outrageous statement, presented without one bit of fact or documentation, that was then used to begin smearing us and establish this presumption of guilt out there.

But, last I heard, we still had a presumption of innocence, although certainly that is under attack as well. That brings us to where we are today, essentially, what began with Democratic party propaganda, opposition research, that began to target us as a real, perceived threat, and likewise, to the Republicans, we are a perceived threat, because we are a politics that is not controlled by predatory banks and fossil fuel giants and war profiteers and pharmaceutical companies and all the rest, which have thrown the American people under the bus.

Related Topic(s): Censorship; Democrats; Election; Elections; McCarthyism; Protest; Russiagate, Add Tags
Add to My Group(s)
Go To Commenting
The views expressed herein are the sole responsibility of the author and do not necessarily reflect those of this website or its editors.