Historian Gerald Horne says that to pass the New Deal legislation, FDR allowed discriminatory practices to appease the racist Dixiecrat section of the Democratic Party; the reforms of the 60's that responded to the upsurge of the civil rights movement helped Black Americans, but have been undone by Democratic and Repubican administraitons since - with host Paul Jay

[The entire series can be seen at The Real News Network]

Dr. Gerald Horne holds the John J. and Rebecca Moores Chair of History and African American Studies at the University of Houston. His research has addressed issues of racism in a variety of relations involving labor, politics, civil rights, international relations and war. Dr. Horne has also written extensively about the film industry. His latest book is The Counter-Revolution of 1776: Slave Resistance and the Origins of the United States of America. Dr. Horne received his Ph.D. in history from Columbia University and his J.D. from the University of California, Berkeley and his B.A. from Princeton University.

Paul Jay: We're continuing our series titled Undoing the New Deal. While most of the measures taken during the New Deal helped to mitigate the worst effects of the depression on workers and created a social safety net where there had been none before, not all Americans benefited equally. Most New Deal programs discriminated against African Americans. Whites were offered the first jobs and it allowed a separate and lower pay scale for Blacks. This is in a federal government jobs program. The Federal Housing Authority refused to guarantee mortgages for Blacks who tried to buy in white neighborhoods and the Civilian Conservation Corps maintained segregated camps. The Social Security Act excluded those job categories Blacks traditionally filled.

The situation in agriculture was even worse. Since 40% of all Black workers made their living as sharecroppers and tenant farmers, the Agricultural Adjustment Administration acreage reduction hit Blacks hard. In this program, farmers were actually paid not to produce food, which raised the prices for farmers but white landlords could make more money by leaving land untilled then by putting land back into production, which created even more Black unemployment.

In the 1960's New Deal-style programs were created that benefited Blacks more equally, but successive administrations both Democratic and Republican have been rolling back these programs since the 1980s. Bill Clinton's welfare reforms played a major role in undoing the New Deal and now the Republican Party is planning to put a few final nails in the coffin of what's left.

Now joining us to discuss African Americans in the New Deal is Gerald Horne. Gerald is the John J. and Rebecca Moores Chair of History and African American Studies at the University of Houston. He is the author of many books, most recently The Counter-Revolution of 1776: Slave Resistance and The Origins of the United States of America. Thanks for joining us again, Gerald.

GERALD HORNE: Thank you for inviting me.

PAUL JAY: Let's start with the New Deal itself. We know that Blacks simply did not benefit from the New Deal programs in the way white workers did. Why don't we start with that? What are some examples of that? Then we can kind of get into the why and the politics of it. 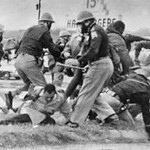 GERALD HORNE: You alluded to a number of the examples, that is to say, with regard to the Social Security program seeking to exclude categories of workers where Blacks tended to flock, such as agricultural labor in particular. I should also mention that with regard to housing programs, recent scholarship has suggested that New Deal housing programs did not erode Jim Crow neighborhoods. They helped to fortify Jim Crow neighborhoods.

However, before we go too far in that direction, I should also mention some of the positive benefits of the New Deal, particularly the so-called Wagner Act, the National Labor Relations Act, which was a kind of Magna Carta for the organizing of the industrial north and the industrial Midwest. This led to the formation of the United Auto Workers, United Steel Workers in particular and they tended to organize many Black workers within their ranks. Then, after those unions were organized, they were able to use the dues money of those workers to support anti-Jim Crow initiatives. In some ways, it's fair to say that the New Deal was a mixed bag for African Americans.

PAUL JAY: In those unionization struggles, many Blacks were in the leadership of those struggles. In some of the bitter fights founding the UAW and some of the industrial unions, Black workers were right up front leading the struggle.

GERALD HORNE: Not only with regard to the United Auto Workers and the United Steelworkers, but keep in mind that at that point there was a flourishing mostly black union, the Brotherhood of Sleeping Car Workers, led by A. Philip Randolph, who started as a left-wing socialist and then migrated into a kind of right-wing social democrat. In between, that is to say in the 1930s, his union, the Brotherhood of Sleeping Car Workers, was a very important force not only in terms of organizing Black workers on the railroads, which then before the era of air travel was the major route for transcontinental travel in this country, but also in more mundane terms, for example in terms of spreading anti-Jim Crow propaganda in the dankest precincts of Dixie. Oftentimes that propaganda was spread, by propaganda, I don't mean that in the pejorative sense, I just mean literature. That literature was spread through Brotherhood of Sleeping Car Worker porters who were traveling, say, from New Orleans to Houston, or from Houston to Dallas. This union drive is really one of the unsung heroes of the whole progressive movement in this country.

PAUL JAY: With much of the New Deal legislation, the jobs I mentioned, jobs went to white workers first. There was a lower, separate pay scale. We're talking jobs in the federal jobs program, where the federal government hired millions of people. There were other programs that discriminated against Blacks. There were some exceptions. Apparently Harold Ickes, who was in the cabinet, put a lot of money into Black schools in the south, but generally speaking, Roosevelt did not want to take on the Dixiecrats, the white racist members of the Democratic Party that controlled much of the legislatures in the south and also represented much of the representation in Congress. Apparently, there was even an anti-lynching law that Roosevelt didn't want to support. The politics of the period, and Roosevelt gets a lot of critique for this that he didn't take them on because they would have blocked his New Deal legislation was his fear. What do you make of the critique? I guess part of what I'm asking is, given the real politics of the day, did he have a choice or not?

Related Topic(s): African-americans; Security; Voting; Workers, Add Tags
Add to My Group(s)
Go To Commenting
The views expressed herein are the sole responsibility of the author and do not necessarily reflect those of this website or its editors.