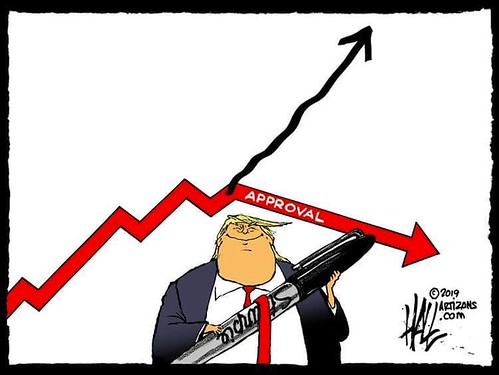 Sharpie Trump approval (and the red line for the death rate according to Trump. After all, as we know, he is now the nation's Chief Medical Officer.)
(Image by FolsomNatural)   Details   DMCA

Well no, I'm not talking about Trump and the cognitive test result that he was bragging about a few weeks ago. Actually, confusing a cognitive test with an intelligence test could itself be considered an indication of decline in cognitive status, but that is another story. This column is another in what will likely be my never-ending series about Trump and the national disaster that he has made the COVID-19 pandemic (the Trumpidemic2020© as I call it) into. Never-ending series, that is, until Trump is out of the White House. And while it is highly unlikely that he could beat Biden-Harris in any kind of a fair vote we all know how hard Trump, his team, and the National Republican Party are working to make sure that at 12:02PM on Jan. 20, 2021 he is still President, whether or not he truly got more votes in the electoral colleg than Joe Biden and Trump's favorite Afro/Asian.

For if Trump remains in the Presidency, among the many horrible outcomes (like the total destruction of U.S. Constitutional government and the projection of the impossibility of doing anything meaningful about Global Warming around the world) will be conversion of the COVID-19 pandemic into the COVID-19 endemic condition, that is, "an infection is said to be endemic (from Greek ἐν en "in, within" and δῆμος demos "people") in a population when that infection is constantly maintained at a baseline level in a geographic area without external inputs." A major reason why this would happen is Trump's aversion to testing for the SARS-Co-V-2 virus. As many other countries around the world have shown, testing, accurate, fast testing is essential to bringing this highly infectious, easily transmissible, disease under control. You've seen the mantra: "Test; Contact trace; Isolate/quarantine." But among other things, since the virus does not recognize state boundaries. Since, as our national experience has clearly demonstrated, without a national, consistent, well-funded, testing program this is impossible to do, the U.S. has ended up with the total numbers of cases and deaths at very high levels as compared with all of the other developed countries around the world.

But Trump just doesn't like testing, certainly under some sort of national program. In fact, on more than one occasion he has suggested that testing should be decreased. Yes indeed, he really would like that to happen (and it may well be, now). Trump has many faults. One of them is that he has little insight. I have a good friend who socialized with him now and then in New York City when he was still active in the real estate business. This person remarked that one of Trump's remarkable features, even in an entirely social situation, was that he had no sense of humor, as in "none." So, when Trump says, when asked about his remark about "ordering his staff to reduce testing" (which ordering, by the way, apparently never happened), "I never kid," he wasn't kidding. He really would like testing to be reduced. Why? Because indeed the number of reported cases would go down.

But why does he want this to happen? I have written at length on this issue from a variety of perspectives. But the bottom line is this. From his youth, Donald Trump has lived a lifetime fighting enemies. Those enemies have always been individual humans or institutions (private and government) represented by humans. But now Trump faces an enemy that is not human. It is, as is well-known, a virus. And for Trump this is problem No. 1. Most people have some notion of what a virus is. By his behavior since the virus first appeared on the U.S. scene back in January, Trump has made it abundantly clear that he really doesn't. And with his resumed "COVID-19 press briefings" (really combo pressers/campaign ads) he lets us know that every day.

But he does know that the "thing" and the diseases that it causes which have morphed into a pandemic (another word he likely does not understand), however he conceptualizes them in his mind, have created a tremendous political problem for him. (That it has created a huge health-disease problem for our nation's people, and has already killed well over 170,000 of us, doesn't seem to bother him so much. In fact when the other day he talked about the necessity for school re-opening he said that it is important not for child learning, but for the economy [always thinking about reelection, ain'tcha, Don]). For him, the pandemic and the virus that causes it are no more, and no less, than his latest, personal, enemies. But, and this is the big BUT, for Trump it is that totally idiosyncratic understanding of the virus/pandemic that explains his behavior. This is the first enemy he has faced in his lifetime that is not a person or represented by one.

Since he no understanding of what a virus is or of the diseases that this one in particular is causing, and certainly no sympathy or concern for those getting sick and dying, the enemy becomes a number. In this case for Trump it is a set of them: the number of cases, the number of hospitalized persons, and the number of deceased persons. So, in order to defeat this particular enemy, in his own mind at least, what he desperately needs is for the numbers to go down, or at least to go up less quickly. Now, he can do nothing about the numbers of hospitalized or deceased persons. So those he simply ignores. But the one number thing that he could do something about --- BY ORDERING HIS STAFF TO REDUCE TESTING (or, as he has done all along, limit to the extent possible the Federal government's responsibility for testing) --- is the published number of reported non-hospitalized cases. And a reduction in that number, as artificially low it would be, to him that would "look good."

And so, as I said above, for Trump, a man who has spent a lifetime surrounded by enemies, this particular enemy is neither the virus itself nor the diseases it causes. Rather, for this poorly educated, uninformed, unintelligent, person, who, as Mary Trump has told us, is obviously incapable of learning anything, the enemy is a number. And that's why, pure and simple, he would really, really, really like testing to be as slow, inefficient, and unreliable as possible, therefore (hopefully for him) producing as small numbers as possible.

And so, when he said that he would really like to have testing slowed down, as he also said, he wasn't kidding.

This column is based in part on one of mine, "Why Trump Wants Testing Reduced," previously published on June 25th 2020, at click here

Steven Jonas, MD, MPH, MS is a Professor Emeritus of Preventive Medicine at StonyBrookMedicine (NY) and author/co-author/editor/co-editor of over 35 books. In addition to his position on OpEdNews as a "Trusted Author," he is a Senior Editor, (more...)
Related Topic(s): Racism; Trump; Trump And Mail-in Ballots; Trump Anger; Trump Approval Ratings; Trump Attacks Democrats; Trump Attacks Joe Biden; Trump Bully In Chief; Trump Campaign; Trump Dangerous; (more...) Trump Idiot-in-chief; Trump Mental State; Trump Racism; Trump Racist; Trump Trainwreck, Add Tags  (less...)
Add to My Group(s)
Go To Commenting
The views expressed herein are the sole responsibility of the author and do not necessarily reflect those of this website or its editors.